It is not our differences that divide us. It is our inability to recognize, accept, and celebrate those differences. — Audre Lorde, Our Dead Behind Us: Poems

My friend grew up in the Deep South in the ’50s and ’60s. And in his childhood church, every member of the deacon board was also a member of the Ku Klux Klan. In fact, the Klan’s concepts were taught in Sunday school. When my friend later went to college and joined a Bible study, an African-American student sat down to join the group.

“What are you doing here?” my friend asked him.

Rather than study Scripture with someone of a different skin color, my friend got up and left.

Like my friend, Jesus was born into intense racial tensions between Jews and Gentiles. Both groups considered the other one inferior, and interactions between the two were avoided. Understanding this, the Gospels show us how very powerfully Jesus spoke against racism with His actions.

In Luke 7, a Gentile army officer whose servant needed healing sent for Jesus. It’s easy to miss asking the question, “Why didn’t the officer go to Jesus himself?” It was culturally taboo for a Jewish rabbi to converse with a Gentile. Instead, the centurion sent his Jewish acquaintances to make the request, Jew to Jew.

The first step to eradicating racism in our churches is to go toward each other. This external behavior must first manifest internally. While it’s easy to spot blatant racism – like my friend’s actions in that Bible study – we can’t move toward each other until we’re able to spot subtle racism in ourselves. Do we stuff people into stereotypes? Do we make assumptions about certain traits based on skin color? Do we avoid encounters with others from a certain race? Do we share racial jokes? Does racism impact our hiring decisions?

Assumptions. Avoidance. Distasteful humor. Discrimination. These subtleties create chasms and ruin potential relationships, but Jesus wants us to move toward each other.

Lord, is there any part of my upbringing – perhaps geographical or generational – that birthed racism in me? If so, reprogram me. Be my bridge over the chasm of racism. Amen. 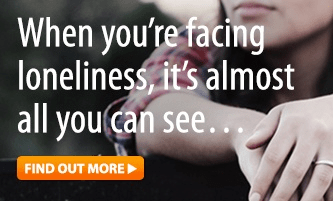 Stuart, Jill, and Pete Briscoe want to show you how you can experience joy, hope, and peace even in life’s lonely seasons. That’s why they want to send you their powerful 3-message CD series, Facing Jesus in Your Loneliness. It’s our gift to thank you for your donation to help broadcast God’s Truth to the world – so more people can experience Life in Christ!