There are some places you shouldn’t stop halfway—a road, for instance. Maybe you’re thinking, Well, Pete, I’m a middle-of-the-road kind of person.

To which I’d answer, “Middle-of-the-road people get hit by cars.”

Listen, there really are some things in life that require you to go 100% of the distance or you’ll miss out on life, and maybe even get killed.

I was in Hong Kong in 1982, shortly after the Chinese border reopened to Westerners. My friend had grown up as a missionary kid in China, so he offered to take me into China. When we arrived at the border, there was a bridge. On that bridge we were neither in Hong Kong nor China. What if we’d said, “You know what? We’re tired. Why don’t we stop here in this “No Man’s Land”?

Immediately following our wedding reception, Libby and I went and grabbed a bite to eat. It was a magical moment. We were no longer single, but we weren’t totally married. And so we just sat there, staring at each other. I’d have been foolish if I’d said, “This moment is so special. Let’s just stay here forever.”

What would you say to someone who wants to know God through Scripture but stopped reading at the end of Malachi, where God says, “ Or else I will come and strike the land with total destruction” (Malachi 4:6)?

You might shout, “Don’t stop with the Old Testament! Flip the page! The best stuff is next!”

Here’s the deal: Many of you are stuck in between legalism and grace. You’ve realized no performance can please God, so you’ve stopped. You’re jumping around, shouting, “I don’t have to! I don’t have to!”

You’ve realized the emptiness of marching, and you’ve decided to stop. This is such a great start. But don’t stop before you become a dancer. Don’t stand in the middle of the road between law and grace. Living life half-surrendered to God’s Spirit isn’t the adventure God has for you.

“Living life half-surrendered to God’s Spirit isn’t the adventure God has for you.”
TWEET THIS

Lord, I’ve stopped marching and I am so excited! But I know there is more to the Christian life than simply leaving the law behind. Prepare me to go the full distance. Transform me so that I’m “all in.” Lead me into the dance. Amen. 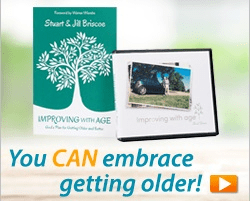 You CAN embrace getting older!

Aging isn’t something to be shunned or simply endured. You can be full of joy and purpose in every season of life. Learn how with Stuart and Jill Briscoe’s book, Improving with Age, as well as Stuart’s companion 6-message DVD series of the same title. These resources are our way to thank you for your gift today.