When someone you love makes compassion, kindness, forgiveness, respect and God an option, you can be sure they have made you an option, as well. — Shannon L. Alder

Favoritism creates disposable humans. We see it in every war, in the Holocaust, in the Middle East, and in our own neighborhoods. In Jesus' day, women were among the discarded... literally.

In his book Who Is This Man?, John Ortberg shares that the Roman world averaged 140 men for every 100 women. You see, the Law of Romulus in Rome required a father to raise all his healthy sons and only the first healthy daughter. After that, daughters were disposable without legal consequence. In one Roman city, Delphi, only 1 out of 600 known families chose to raise more than one daughter. Can you imagine?

Josephus, a famous Jewish historian, wrote, "The woman, says the law, is inferior to the man." Thus, because men were favored, women became disposable.

Jesus went out of His way to invite the discarded and rejected into the Kingdom. He was radical in this way—radically inviting outsiders to become insiders.

Think about the woman at the well in John 4. Her ethnicity is considered inferior, her gender is considered inferior, and she had been abandoned—either through death or divorce—by five men. She's despised, discarded, and rejected. So when Jesus speaks to her, she's shocked. I love how Jesus responded to her shock. If you knew Me.... (para. 4:10)

Scripture says that when the disciples returned, they marveled that Jesus was talking to this woman. Listen, when we start to see others as Jesus sees them—as all His favorites—our behavior can be just as radical. We will find ourselves engaged in conversations that blow our minds, blow their minds, and blow the minds of those watching. Jesus is radically accepting, and He is in you! When you know that about Him, He will love this way through you.

Lord, my prayer today is simple. I want to know You more. I want to know the depths of Your compassion, the extent of Your kindness, the freedom of Your forgiveness, the regard for Your creation, and the place of belonging found in Your love. Then love the rejected ones through me. Amen. 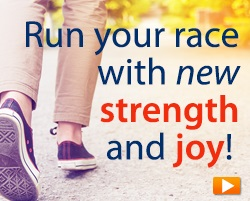 Run your race with new strength and joy!

The journey of faith is filled with rocky roads. When life isn't perfect it's easy to confuse the events of life with the absence of God. We want to send you Jill Briscoe’s Faith Enough to Finish book to help you find the strength you need to endure life’s tough times. Request your copy as thanks for your gift today!