Taking Issue with "The September Issue" 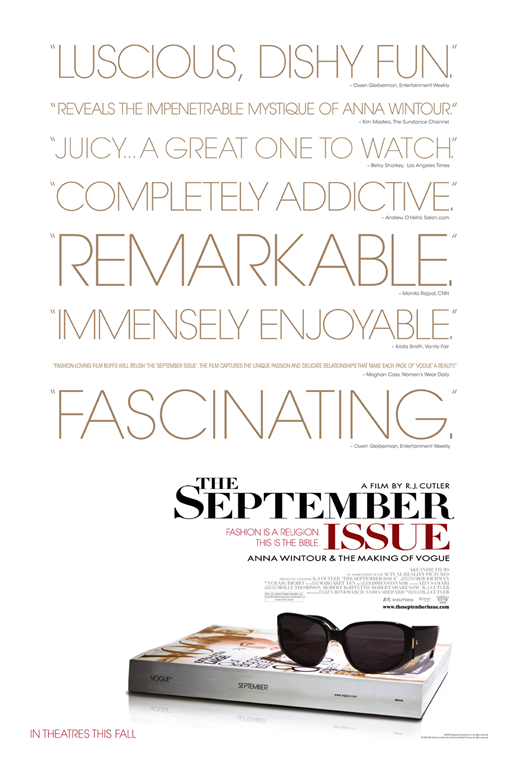 I have been an on-again/off-again reader of Vogue magazine (actually, make that a "skimmer") ever since I can remember.

More interested in the pretty pictures, I've rarely read an article but have focused my time on taking in the images of fantastical clothing and accessories depicted therein.  While my bank account and conscience cannot—and probably never will—support the acquisition of such high-priced merchandise, I can surely appreciate the craftsmanship of exquisite fashion and also be entertained by the somewhat over-the-top and amusing layouts found within this "fashion bible."

So, naturally one might understand why I had an interest in seeing The September Issue, a new documentary directed by R.J. Cutler (The War Room) that goes behind the scenes at Vogue to chronicle the creation of the September 2007 issue—the magazine's largest (the '07 issue was and still is the biggest ever, weighing in at four pounds and selling 13 million copies).

Going in, I had visions of The Devil Wears Prada dancing in my head.  Based on the best-selling novel by Lauren Weisberger, Prada is rumored to be largely based on the author's experience spent working at Vogue as an assistant under current Editor-in-Chief Anna Wintour.  In Prada, Meryl Streep plays the head of fictional magazine Runway and is said to have captured the very essence of what an editor like Wintour would be like.

Disappointingly and yet appropriately, The September Issue portrayed a more realistic account (as it should, since it's a documentary).  There were no lighthearted moments of Streep bringing to life an elegantly coiffed and meticulously appointed editorial dragon in high heels, who rules with little heart and tosses her fur wrap haughtily across an assistant's desk as she breezes her way into the office each day.

Instead, the viewer is given an insider's look (albeit with certain boundaries in place, as Wintour is undoubtedly in control of how she's being portrayed and of her "performance") of how "the most powerful woman in fashion" ruthlessly runs a magazine.  Her trademark, severe bob swinging to and fro, she breezes in to the publication's New York offices and holds editorial meetings with a well-manicured fist.  Dark sunglasses are worn on many occasions (meetings, fashion shows—inside or out, it makes no difference), no doubt as a means to control or set up an exclusionary and maybe elitist boundary of sorts.

We also get a closer look at her relationship with Vogue Creative Director Grace Coddington, also a 20-year vet at American Vogue (in addition to her 20-year stint at British Vogue).  Coddington is the heart of this documentary and shows us more of her cards on camera than anyone else, as her confessionals (in the hallway, in her office, in the car, on location) feel genuine and not manufactured for the film in the least.  It is quite evident she is an artiste in every sense of the word and labors with great passion over each photo shoot or spread that she submits for approval to Wintour.

In her indifferent sort of way, Wintour dismisses many of the ideas and images Coddington brings to the magazine's narrow layout room (where the issue is carefully put together).  Photos are scrutinized, swapped out and tossed to the side.  Too much of this or not enough of that.  It's clearly Wintour's way or the highway when it comes to what will go and what will stay in the September 2007 issue.  In one scene, as she makes her way along the layout wall, an underling is in her way.  "Excuse me," Wintour mutters without even looking away from the photos and continues moving in sidestep fashion as she inspects the issue.  What's even more telling is that the staff member quickly moves out of the way without even a gasp or backward glance.  Apparently, this is Wintour du jour at Vogue.

I lost track of how many times I shook my head in amazement ("Did she just talk to her staff in that way?") or laughed nervously ("I can't believe she just did that!") or just felt sad ("Could someone seem any more isolated from the world—and by what seems to be of her own choosing?").  Wintour's disrespect and apparent disregard for humanity when interacting with her staff—or the perceived boredom or demanding attitude she has when meeting with some of the world's top fashion designers to give input on their upcoming lines (Jean Paul Gaultier, Oscar de la Renta, Karl Lagerfeld)—was almost unbelievable.  As in, is this a documentary, a mockumentary or the latest sketch on SNL?  Clearly, this woman has undeniable power and can make or break any designer, any trend or any product line in the world of fashion.

After an hour and a half, I suppose one could walk away just being baffled and somewhat amused.  But I wanted more.  What was I supposed to learn from this?  Why is this type of behavior and treatment of others being celebrated?  And why didn't I feel like The September Issue was "luscious, dishy fun" or "immensely enjoyable" like the movie poster suggests?

Apparently I missed what other reviewers didn't.  In fact, the "Tomatometer" at RottenTomatoes.com, a clearinghouse of sorts that compiles film reviews from numerous print pubs, rated The September Issue as 84 percent "fresh."

I can't agree with that.  But I can agree with what one dissenting reviewer had to say …

"Wintour's face, sometimes sans her trademark shades, is often the focus of Cutler's lens.  But she reveals little of what's in her heart ... and neither does the movie." - Kathy Flanigan, Milwaukee Journal Sentinel

It is interesting to see how close the camera does get to Wintour's face.  During her one-on-one moments—that provide some respite from the chaos of the office, the shoots and the fashion shows—the dark sunglasses are off, and Wintour seems a little more present when answering questions.  It is then that we see the sadness behind the eyes.  We see a woman who has so removed herself and shut down her emotions and perhaps blocked many opportunities for human connection and interaction.  A brief reference to her own father's more "Victorian" upbringing (with little to no interaction with his parents) could probably provide some clues to this elusive woman we see on-screen.

Thankfully, the one bright spot in The September Issue is the interplay between Wintour and her college-age daughter.  There is a genuine warmth that suddenly appears as the two share a few moments  in the family's weekend home.  It's very obvious of the love between mother and daughter, and it gave me hope that there is something beating inside Wintour's whippet-thin frame.

The documentary ends in celebration of the closing of the '07 issue and in celebration of the staff's hard work.  Yes, the effort, the long hours, the attention to detail, the demand for excellence all paid off.  This can be true in any industry or facet of business.  But ultimately, what is more valuable?  The success of one issue that will quickly be forgotten (whether or not a documentary immortalizes it on film) or what Wintour could become if she used her tremendous power to uplift, to nurture and to change lives (her staff, her family, anyone) for the better?

It's something for all of us to think about no matter what our occupation or station in life and no matter how far-reaching our influence.  How should we live, how should we love others and for what do we want to be remembered?  That, I believe, is the most important issue.