The bold proclamations of faith by college football stars like Florida's Tim Tebow, Oklahoma's Sam Bradford and Texas's Colt McCoy have generated a lot of buzz along predictable party lines. People of faith cheer on their testimonies while others resent that faith is being "forced" down their throats. Passionate editorials have been written about the eye-black messages that Tim Tebow and others wear during games. If you are unaware, Tebow would pick a Bible verse and write it onto the eye-black he wore for the game.

Indignant journalists railed about the inappropriate use of the pristine amateur platform of collegiate sports while the university pockets millions by plastering corporate logos all over that same player's body. Hmmmm. Seemed like much ado about not much to me. I usually get a few responses on this topic that go something like this.

My response is simple. I wouldn't care. The message doesn't matter as much as the messenger. And that brings me to the point of today's humble ramblings. In the days leading up to the BCS National Championship game an organization called I Am Second ran commercials featuring Texas Longhorn QB Colt McCoy. In the spot McCoy credited God for being the man he has become. Colt noted that he played the game for God and that he was successful because of Jesus Christ. 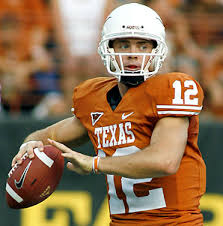 And I remember thinking that Colt McCoy was putting a lot of pressure on himself. What if he had a bad game or threw an interception that lost the game? How would he handle the sarcastic comments and questions? Where was Jesus on that play? Didn't God see the safety underneath? I know how mean people can be. Was it really fair to put that on a young man?

What actually happened was even worse than my imagined concerns. Five plays into the game McCoy was hurt on a very routine looking play. His arm went totally numb. Underneath the Rose Bowl stands McCoy tried to throw some short passes to his dad. Each one fluttered off target. As his dad hugged him Colt McCoy wept in bitter disappointment. I watched with sadness as he returned to the sidelines. I am not a Texas fan. In fact I grew weary of watching him light up my adopted Baylor Bears. But I hate to see a big game impacted by injuries. I wondered how McCoy must be feeling. I wondered if he was mad at God. After all he had tried to use his talent and opportunity to tell people about his faith. Why did this happen? Then I remembered the theme of the campaign. I am second.

After the game McCoy was interviewed and he was asked about how it felt to have to watch from the sidelines. He composed himself for what seemed like a very long time and then spoke with a maturity that belied his age. He talked about his love for the game, his teammates and his profound disappointment for not being out there with them. He congratulated Alabama. And then he validated the message of the commercial that was so easy to make weeks earlier when everything was going well. Now McCoy was being tested about who was really first. He passed the test.

"I always give God the glory. I never question why things happen the way they do. God is in control of my life and I know that, if nothing else, I am standing on the Rock."

I have respected how this small town athlete succeeded on the big stage of Big 12 football. But I have never had more respect for Colt McCoy than after a game in which he took only five snaps. He lived his words. I don't know what the future holds for Colt McCoy. I wish him well. I hope his NFL dream works out. But I am confident that Colt McCoy will handle whatever life throws at him. Because he learned at a very young age a truth that took me far longer to understand. I am second.