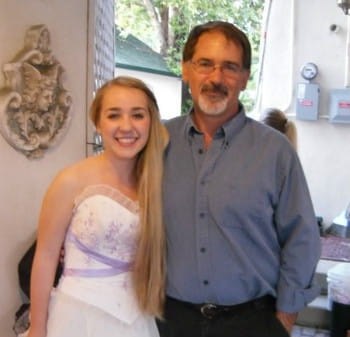 The daughter of an e-friend of mine recently left home for college. My friend was in tears from missing her. (For his FB status he wrote, “Havng a child is like having your heart walk outside your body. And tomorrow my heart leaves for NY.”) I asked if he’d like to write out his feelings. I’m sharing with you (with his permission, of course) what he penned in response, because I know that this time of year a lot of parents are feeling in their hearts what this good man is feeling in his.

Yesterday I sent my little girl off to college, all the way on the other side of the country. And this is how eighteen years go by: she was the first child, the first grandchild on either side. She was born six hours after my uncle died. So I was at the hospital for the delivery, and then got on a flight to go to a funeral, carrying a Polaroid photo of her and her mother.

The blur: the bassinet, baby food, diaper bags, Disney Princesses, bounce houses, play dates, rocking her to sleep, pre-school, swing sets, her blankie, her first dress-up shoes, hitting her head on a brick wall and off to the hospital for the CAT Scan, Halloween costumes (at six she dressed as Mulan; last year she dressed as Edith Piaf), me at the piano teaching her how to sing “Somewhere Over the Rainbow,” and then I take her to an opera when she was 11 and at intermission she tells me she wants to be an opera singer. And then driving her to voice lessons, and driving her to school, sharing a commute with her for three years, talking about her dreams, about shows we’ve seen, about trouble with friends and teachers and classes, and watching her sleep in the car during finals weeks, and more performances, and college applications, and auditions, and a road trip, and throwing snowballs at each other, and she decides to go to the East Coast for school. And her in one more show this summer (The Drowsy Chaperone. People lined up to tell me how good she was.)

And then she’s gone.

And her room is still the same: Audrey Hepburn poster, bookshelves (Jane Austen, the Twilight series), and as she left all I could do was ask if she packed a Bible: “It’s right here, dad.” I know she packed a tiny shred of her blankie. And there’s this feeling of … I couldn’t do enough, couldn’t give her enough, wasn’t there enough. But she doesn’t see it that way, and gave me the biggest hug on the way to the airport. And that’s why it hurts so much. I tell her I love her every day, and then she leaves and I know it because I’m crying. So many days she’s been the best part of my life. Through lousy days at work, car accidents, bounced checks, all the stuff about life that's just no good. When there’s nothing redeeming about it at all, no great message, no lesson, just a pile of irritating depressing stuff, she has been the thing that made me smile. I don’t mean this to be all about me. It’s her story, not mine. I’m excited for her, and happy for her, and it’s time she was out in the world. She’s a lot better prepared for it than I was at her age. And she’ll be back for a visit in a couple of months. But today, I sat on the edge of her bed and it was just hard to get up and go on with it. Someone once said “Don’t cry because it’s over; smile because it happened.” But today is a day for crying and crying hard. She’s grown into a beautiful young woman and I miss her so much and it’s only been a day.