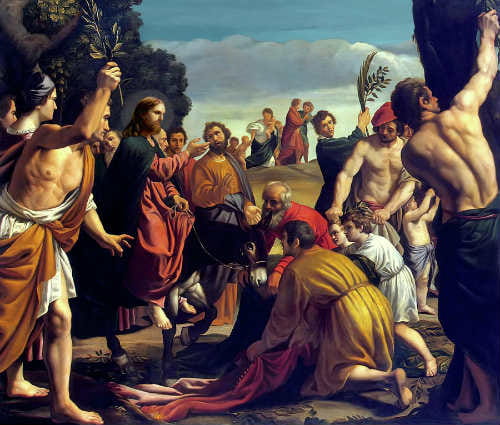 Today, Palm Sunday, is the first day of the Christian Holy Week, when everyone in Palm Springs wakes up and exclaims, “Oh, come on already!”

Unless they’re Christian. Then they kind of do.

Palm Sunday is the first day of the final week of the season of Lent, which concludes on Easter Sunday. The other key days of Holy Week are Holy Thursday, Good Friday, Holy Saturday, and of course Easter.

On each of those days this week I’m going to write about that day.

Like most humans with eyeballs, I find Renaissance/Baroque-era paintings insanely awesome. Those big beautiful paintings used to be the movies for people.

I don’t think in those days they had popcorn, though. I think while ogling those paintings, people just stood there . . . gnawing on massive turkey legs, I guess. Or potatoes, for the poorer ones. I dunno.

But I do know that many such paintings depicted an event in the life of Jesus Christ. So I thought that, on each of the key Holy Week days this week, I would talk about that day through talking about one such painting. (Not that I’ll be giving Art History lessons, or anything. Though I could see giving a test afterwards. We’ll see.)

Doesn’t that sound like fun? Oh. Well, I’m going to do it anyway.

For today’s painting we have Entry into Jerusalem, by the Spanish Baroque-period painter Pedro Orrente.

And here is John 12:12-19, which describes the event commemorated by Palm Sunday:

The next day the great crowd that had come for the festival heard that Jesus was on his way to Jerusalem. They took palm branches and went out to meet him, shouting,

“Blessed is he who comes in the name of the Lord!”

“Blessed is the king of Israel!”

Jesus found a young donkey and sat on it, as it is written:

“Do not be afraid, Daughter Zion;
see, your king is coming,
seated on a donkey’s colt.”

Now the crowd that was with him when he called Lazarus from the tomb and raised him from the dead continued to spread the word. Many people, because they had heard that he had performed this sign, went out to meet him. So the Pharisees said to one another, “See, this is getting us nowhere. Look how the whole world has gone after him!”

I love that last sentence. “See, this is getting us nowhere.” Awesome. Could they be any more missing the point?

So as to the painting. Right away let me say that I have no idea what the guy on the far right is doing. Perhaps he’s thinking, “Please check out my back muscles.” Actually, it looks like he’s carving something into a tree. I wonder what it is? Alonzo was here, 1620? Who knows? It’s intreeging, though, don’t you think?

Oh, what, I can’t do puns? Just because I loathe them? Just because if I ever write one again I want you to hunt me down and kill me?

One of the things I love about this painting is that it captures the went out to meet him part. Most depictions of Jesus riding into Jerusalem show him already inside the gates of the city. Here we see him still on the road, in a pastoral setting. This is important, because we too easily forget how likely it was that Jesus didn’t just hop on that donkey right outside the city gates.

Mark 11:1 says: “Now when they drew near to Jerusalem, to Bethphage and Bethany, at the Mount of Olives, Jesus sent two of his disciples and said to them [go bring me a donkey.]”

John 11:18 says: “Now Bethany was near Jerusalem, about two miles off.”

Two miles! That’s how long Jesus probably rode that donkey—and down a rocky, dusty road at that.

En route to his “triumphant” entrance into Jerusalem, Jesus Christ rode a donkey for two miles. If ever I think of the words to capture the enormity what that tells us about Jesus, I’ll let you know.

Notice the clouds behind that man. See how they transition from dark to light—how they become white at the very place where, for us, they meet the palm and olive branches. And look how those branches point toward Jerusalem.

Note also the red cloak the people are laying before the donkey. It’s of much higher quality than anything they’re wearing. You can see how precious it is: four people are participating in its placement.

People aren’t bringing just any old garment to lay down before Jesus. They’re bringing literally the best stuff they can get their hands on.

And look at the old man in what amounts to the visual center of the picture. It’s so perfect that he’s down so low, yet looking up at Jesus with such hope and reverence. It’s relatively easy to impress young people; the elderly, who have seen so much more, are less readily impressed. You know that guy has seen some hard, hard times. But look at him. He knows he’s beholding the means by which his glorious real life will soon enough begin.

And consider the tall woman on the left. Except for the lady with the children in (interestingly enough) the most distant background, she is the only female in the picture. Self-possessed, of some means, unlikely to be swayed by shallow sentimentality, she appears to have come less to worship Jesus than assess him. She’s dressed up, though; she’s serious about being there. But she is not (yet?) a true believer.

With her face turned almost beyond our view, I find her a fascinating expression of the skeptic within us all.

Finally---and first, really---how do we not love the fact that the donkey, looking straight at us, is unmistakably smiling?