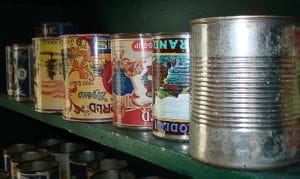 Just got home. Opened the frig. An odiferous gallon of sour milk reminds me that I should have pitched it days ago. Milk has a short shelf life. The rotten cow juice makes my Cheerios taste like poo.

Avocados are the food of the gods, in my estimation. Especially if you pair them with salsa and Doritos. If you grab avocados in the grocery, they are rock-hard and tasteless. Stick them in a sunny windowsill for two days and they become silky and succulent. Leave them too long and they become brown and pasty. Blech. Their shelf life is miniscule.

Hostess Twinkies have a shelf life of fifty years. I’m not kidding. Hostess is out of business, but the cream filling may be re-purposed as cement for space stations in 2050.

God’s timing is everything.He knows when you are green around the gills and unready for impactful ministry. You may need to sit on the shelf. To wait. To ripen. The slow simmering sun of stress, sickness and sadness softens our souls and makes us useful in our Father’s hands.

Do you feel you have been “put on the shelf” by God, benched on the sidelines, missing the big game? Fear not. You are in good company.

Moses, the Hebrew baby raised as a prince of Egypt, angrily murdered an Egyptian overlord. When the Pharoah learned of his traitorous deed, the prince became a fugitive, fearing for his life. Some historians believe Moses, educated in the Royal School by world-class Viziers, led Egyptian armies in battle against their Ethiopian enemies. Pharoah Aminhotep’s heir escaped to the backside of nowhere-the desert of Midian. He herded stinky, stupid sheep for forty (that’s right!) FORTY years. God’s call came in a burning bush and Moses’ first words were, “God, I’m a lowly shepherd. I can’t. You’ve got to be kidding. I stutter. Let Aaron do it.”

Moses was in good company. God had many shelf-sitters just waiting for the time to be ripe. They sat and sat. Waiting. Squirming.

Paul the apostle was gloriously saved. He then spent fifteen years on the shelf before he began his first missionary journey. He began his ministry as an “old man,” forty-nine years of age. At the outset of Paul’s ministry, he called himself a Pharisee, a Hebrew among Hebrews. After sitting in a dark, dank Roman jail cell, he confessed to young Timothy that he was the “chief of sinners.” Paul wasn’t just placed on the shelf. He was stashed in a dark, dank hole in the ground. And the letters he penned in that prison changed the world.

I could go on and on. Abraham and Sarah waited a century for a son, the heir God promised them eons before. Isaac (whose name is laughter) wore Pampers. Sarah wore Depends. One could argue the ancient pair were not only on the shelf but in cold storage. And a mighty nation was forged from Abraham’s descendents.

Even Jesus was a smash at twelve when he wowed the teachers of the Law in the Temple. He then spent eighteen years hammering and sanding until He was thirty. Only then, in God’s time, did Christ step in the Jordan to be baptized by John.

Why does God wait?

Why does He set us aside?

My beloved husband Roger was called to preach when he was seven. He preached his first sermon when he was thirteen. He preached his socks off for forty years. Then his heart began to fail. Although Roger performs many great ministries for the Kingdom, the passion of his life, sermonizing for His Savior, is often too difficult to manage. I’m angry. I hate to see him hurting. He has become content to wait on God.

Here are some helpful lessons I have learned about “shelf life.”

God is not in a hurry to take you off the shelf. Miles Stanford, in his timeless classic, Principles of Spiritual Growth, penned these words: “It takes God one hundred years to make a mighty oak. He can turn out a squash in six weeks. Which do you want to be?”

Sitting on the shelf causes our self-confidence to die and our God-dependence to grow. We shouldn’t rush that process.

When you are on the shelf, shut up and listen. In the quiet of God’s dark pantry, His still small voice may reveal to you His heart in ways you have never known.

When God “shelves” you, He may be shaping you for a different, even more powerful ministry.

God’s “ripened” servants make the most dynamic impact in the Kingdom.

Wait for Him. Don’t despise the shelf. He knows when you are ready.