'Shark Week' and the World's Most Dangerous Work 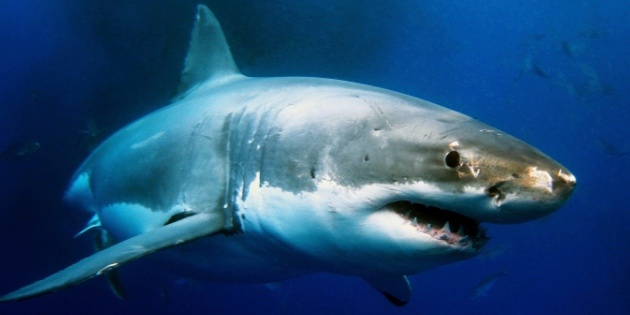 It’s “shark week” on the Discovery Channel—TV’s annual celebration of man’s fascination with the ocean’s most feared and, perhaps, most misunderstood species. Since its inception in 1987, viewers have voraciously taken in hours of makos, hammerheads, and great whites weaving and darting through shadowy waters while an ominous score attends every menacing move. Courageous captains, camera operators, and divers lap up every life-threatening minute while viewers like me safely watch from afar.

After watching Shark Week, you might tend to agree that the job of being a shark diver is one of the most terrifying and physically dangerous jobs in the world. Just last night, one diver in a segment (“Great White Serial Killer”) tried to describe what it was like to stand in a protective cage as it was battered and rattled during a great white shark attack. (It was shown in slow-motion, of course). Still visibly shaken moments after being pulled from the damaged cage he exclaimed, “You just can’t fight mother nature!”

After one short encounter with this awesome ocean creature, the man sat there almost breathless. The shark had utterly humbled him. I, on the other hand, could just sit on my couch and watch. I could look over at my sons and agree with them about how amazing it was while tossing another kernel of popcorn up in the air and into my mouth. Unlike the diver, I knew nothing about the terror of being submerged underwater with less than an inch of metal separating me from a 16-foot, 4000 pound omnivore. Power has a humbling effect, but it takes a personal encounter with power to actually be humbled by it.

While the job of being a shark diver is certainly dangerous, there is one filled with far greater, more permanent danger. It’s a job that too many people take on too easily without understanding the gravity involved. In light of what Jesus says in Matthew 10:28, it’s actually the most dangerous work in the world:

“Do not fear those who kill the body but are unable to kill the soul; but rather fear Him who is able to destroy both soul and body in hell.” (Matthew 10:28)

Couple that with the warning in James 3:1…

“Let not many of you become teachers, my brethren, knowing that as such we will incur a stricter judgment.”

What's the most dangerous job in the world? It is the treacherous work of being a teacher of the Bible. It's having the nerve to say, “This is what the Bible really means,” or “The Bible is hopelessly corrupt and doesn’t mean anything.” In other words, anyone who dares to proclaim what the Bible is or what the Bible means takes upon himself the weighty mantle of Bible teacher. And it puts him under the strictest judgment before the all-consuming, living God.

God is a “consuming fire” says Hebrews 12:29. “It is a terrifying thing to fall into the hands of the living God,” says Hebrews 10:31. The Psalms tell us tells us that “power belongs to God” (Psalm 62:11). And, after the greatest display of power in human history—Christ’s resurrection—Jesus Himself pronounced that all authority belongs to Him (Matt. 28:18).

If people actually knew the extreme danger of being a Bible teacher, I wonder how quickly they would clamor to become one.

Would-be Bible teachers these days take a number of forms. Often, it’s the unaccountable blogger or Christian music personality. It’s the Facebook commenter, tweeter, or coffee shop talker. There are many people with starkly different views, all claiming the Bible supports their way of thinking. Never mind that they might disregard 2000 years of faithful Christian teaching for the sake of their novel opinions, they know how to quote chapter and verse too.

So, who really gets to say what the Bible really says? The full answer will follow in another post, but one clear sign of a trustworthy teacher is that he takes seriously the gravity of being an interpreter of God’s Word. He doesn’t take lightly the judgment of God reserved for those who mishandle Scripture. His response to being in the presence God is, first of all, fear. “Woe is me!” cried Isaiah when he saw God’s majesty (Isaiah 6). Proverbs describes the fear of God as “the beginning of wisdom” (Prov. 9:10). Such fear is the first mark of a true Bible teacher. He's had a personal encounter with God in His power and has been humbled by it.

Alex Crain lives in central Virginia with his wife, Aileen, and their three children. He is the editor of Christianity.com and serves as a pastor at Harvest Christian Fellowship. You can follow him on Twitter @alex_crain.