Here's the Difference between Feeling Thankful and Thanksgiving 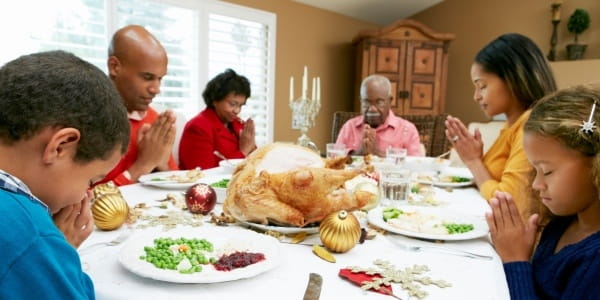 "Thanksgiving may be the last religious holiday still widely celebrated for its true meaning. While our post-Christian culture has all but divorced Christmas from the Incarnation and Easter from the Resurrection, this last holdout—this simple ritual of gratitude—is still hanging on."
-Jayme Metzgar: "Here’s The Difference Between Feeling Thankful And Thanksgiving"

In the rush surrounding the Thanksgiving holiday, it's easy to become overwhelmed with all there is to do. The ball game on TV can bump that well-intended time of grateful prayer down the priority list. But hopefully you will carve out time to slow down and count your blessings. And when you do, keep in mind something that Jayme Metzgar pointed out in a popular article recently: it's not really thanksgiving to just feel thankful. (Sorry, Oprah.) As admirable as it may be to routinely practice the habit of gratitude, real thanksgiving needs an object. It requires someone to whom we are thankful, not just generic feelings of thankfulness.

Metzgar writes: "While gratitude based on temporal things will eventually fail us, thanksgiving is an act of communion with the eternal God. As such, it anchors us to something that will last forever."

The early settlers of Plymouth Plantation rejoiced over their good harvest. But their material blessings weren't the source of their gratitude. Neither did they merely have thankful feelings in the generic sense. They directed their thanks to God. Historian Tracy McKenzie writes of them...

When the Pilgrims spoke of holidays, they used the word literally.  A holiday was a “holy day” set apart for worship and communion with God.

The occasion that the Pilgrims would have remembered as their first Thanksgiving Day in America occurred in the summer of 1623, nearly two years after the event that we commemorate.  During that summer a two-month-long drought threatened to wipe out the Pilgrims’ crops, and the prospect of  starvation in the coming winter loomed over them.  In response, Governor Bradford “set apart a solemn day of humiliation, to seek the Lord by humble and fervent prayer, in this great distress.”  The Pilgrims gathered for a prayer service that lasted some 8-9 hours, and by its end, a day that had begun hot and clear had become overcast, and for the next fourteen days a steady, gentle rain restored the parched earth.  “But, O the mercy of our God,” Winslow exulted, “who was as ready to hear as we to ask.”

Having this sign of God’s favor, Winslow explained, the Pilgrims “thought it would be great ingratitude” not to thank God publicly for his deliverance.   And so “another Solemn Day was set apart . . . wherein we returned glory honour and praise, with all thankfulness to our good GOD.”

Your turn: What about you? This Thanksgiving, is your gratitude directed toward a Person---to the One, true and living God from whom all blessings flow?