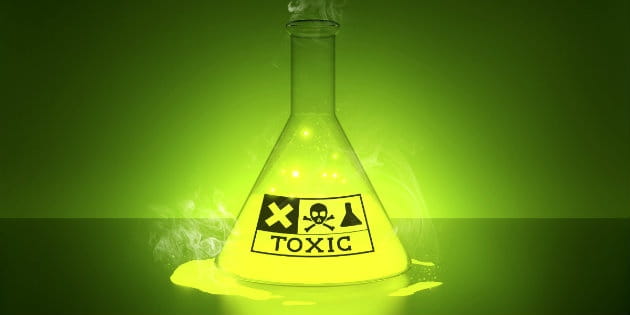 What does it take to kill a marriage?
As someone who’s only been married for two years, it’s hard to imagine any force being strong enough to poison my relationship with my husband. But older, more experienced couples are more realistic, more aware of the devastating toll sin can take on a marriage. Every day couples get divorced over infidelity, dishonesty, and abuse. But nobody goes from 0-60 miles per hour instantly. Nobody goes from “loving husband” to “lying, cheating, gambler” overnight.
At Relevant Magazine, Cara Joyner writes that three small steps can ultimately lead to the death of a marriage. And unfortunately, so many of us regularly engage in these behaviors without realizing the dangers they pose.
In How to Poison Your Marriage in 3 Easy Steps, Joyner says the first step is blame.

Blame has short-term memory loss. It’s a big fan of calling attention to the deficiencies in our spouse while conveniently failing to recall the toxic contributions we keep bringing to the table. Grace finds no home within the confinements of blame, as we become the man who was forgiven a huge debt only to turn around and refuse to forgive a much smaller one (Matthew 18:21-35).

Instead of blaming and complaining, marriage counselor Dr. David Hawkins entreats couples to learn how to confront one another lovingly and respectfully about bad behavior.

There is a time when we gently share with our mate that they have not kept their agreements, or have acted in a way that was hurtful. We must be willing to ‘stand in the heat’ as they process the difficult words you say to them… Remember that you are on the same team and likely want the same outcome. Even if you want two different things, you want to collaborate so as to arrive at a conclusion that works for both. Respect goes a long ways toward achieving that goal.

Ready to jump in where blame left off, comparison deceives us with the illusion of something better or someone better. Unfortunately, we aren’t very good at gauging other people’s reality from a distance—comparison’s favorite vantage point. From a distance, it is easy to amplify their wins and minimize their losses; and in the convenience of that superficial space, our own faults appear diminished.

In These 5 Powerful Truths Can Absolutely Save Your Marriage, Cindi McMenamin reminds us that comparison is deadly because the grass is NOT greener on the other side.

We tend to look at other situations that are less familiar to us and imagine the best....just like you looked at your fiancé years ago and imagined the best possible scenario with him. Then reality happened. Your spouse has flaws. So does the nice-looking man across the street or the recently divorced woman in your office or the very capable single mom or dad you met in the school parking lot. Doesn't it make sense to continue to invest in the person you've invested years in than to start all over with someone else's issues, baggage, past, and problems?

Withdrawal undermines the work of healing by accepting zero responsibility and avoiding any platform for reconciliation. It's easy to be “right” when no one has the opportunity to suggest we may be wrong.

One way couples can avoid withdrawal and work toward healing is to become a student of each other – including their personality types. Etroverts and introverts communicate differently and often have different emotional needs, Debra Fileta explains in her article 3 Big Secrets Extroverts Who Married Introverts Need to Know. What an extrovert might initially consider “withdrawing” might really just be the necessary space an introvert needs to rest, recharge, and consider all factors of a situation.

Many introverts like to think things through rather than talk things out. They tend to “take it in” rather than “talk it out.” They can internalize information in order to digest it better in moments of quiet. Some introverts may even need some time to step away and think before taking for a chance to speak. When problems or conflict arise in a relationship, it’s important to remember this key difference between introverts and extroverts, otherwise you’ll end up playing a game of cat-and-mouse with one person trying to “talk it out” while the other person is not quite ready.

If you’re married to an introvert, remember that it’s not only okay, but important to give them a chance to think before requesting for them to speak. Allow them the freedom to step back or step away from a situation momentarily, with the goal of coming together later to process, discuss, and work through the situation at hand.

With so many ways to poison a marriage, some might ask – is the institution even worth it? Fileta insists that it is. In another piece entitled 5 Reasons Why Marriage is Still an Amazing Idea, she writes:

As a woman of faith, I realize that my marriage is not just about me. It’s so much bigger than me, and so much bigger than my husband. In marriage, you have the opportunity to learn so much about life, love, and God. There is a reason that God uses the analogy of marriage to describe his love for his people. It’s because in marriage we get a glimpse of a love that’s far bigger than us. Our deep love for one another reflects a universal need for love, for commitment, and for something and Someone greater than ourselves. Through marital love, we get a tiny glimpse of the great and unconditional love of God. Not only so, but my marriage is bigger than me because it impacts the world around me. There are many lives that are impacted by this one commitment between two people, most significantly the lives of our two precious children. At this stage of their lives, our marriage is the ONLY definition they get to see of love. Not only do we owe it to ourselves to live a life worthy of love, but we owe it to them. We owe it to them because how we reflect the giving and receiving of love, will impact generations to come.

Marriage is beautiful. Marriage is sacred. And marriage is totally worth it. For this reason, no matter what obstacles come my way, I choose to handle marriage, and if at all possible- so should you. I have hope that this generation will catch a glimpse of the blessings and joys of marriage.

Debbie Holloway is the Family Life Editor at Crosswalk.com
Publication date: May 13, 2015