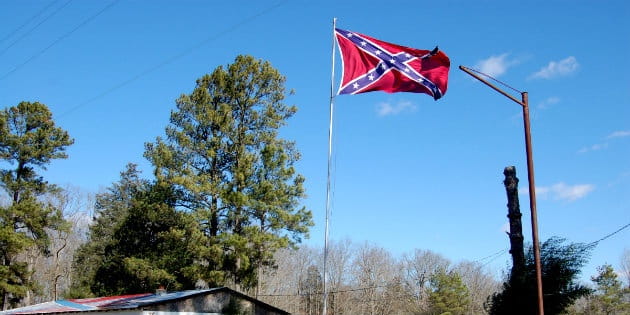 My father is from Charleston, South Carolina. My mother, however, was raised in upstate New York – the daughter of a quiet North Carolina lady and a brash German immigrant. Thus, our household was an intriguing mixture of southern tact and northern sass, with just a dash of German spitfire.
I don’t remember how old I was, but I remember during our Civil War studies asking my mother, why do people still fly the Confederate Flag? Obviously as children, life feels very black-and-white to us. Good vs. evil. Hate vs. love. Happy vs. sad. In reality, the world is much more nuanced. But over the years, that question has lingered in my brain. Now, with the recent shooting in Charleston, the question of the flag is no longer just a place of disquiet in people’s hearts and minds. It’s a public discussion on everybody’s Facebook. It's being debated by politicians.
Evangelical figures such as Al Mohler and Russell Moore have called for the flag to be removed from government flagpoles. Now Denny Burk of the Southern Baptist Theological Seminary weighs in with the question, Is taking down the Confederate battle flag a mere gesture?

When George H. W. Bush shaved his head a couple years ago in solidarity with that two-year old cancer victim, no one was under the illusion that shaving one’s head has anything to do with solving the problem of cancer. Everyone understood it as a beautiful expression of concern—an acknowledgement of and identification with a precious child who was suffering. It may have been a “gesture,” but it was a gesture of love that meant something—not only to that child and his family but also to the whole country. And it misses the point to complain that shaving his head did nothing to heal the child.

Likewise, taking the flag down really won’t do anything to erase our nation’s original sin. Nor is it likely to bring about the end of racism in our time. At the very least, however, it is a way for Christians to acknowledge festering racial wounds and the slighted consciences of black Americans. Even if you believe that the flag represents “heritage not hate,” taking the flag down is a way for you to say to black brothers and sisters in Christ, “Your suffering is weightier to me than my right to wave this flag, with all its checkered history.” In short, it’s a gesture of love and reconciliation. And that means something—especially in the aftermath of Charleston. It is our “head-shaving” moment, if you will. Or we might even say that it is our 1 Corinthians 8:13 moment: If a confederate battle flag causes my brother to stumble, I will never fly that flag again, that I might not cause my brother to stumble.

That’s not a mere gesture. It’s the first fruit of the Spirit and the defining mark of Christ’s people (John 13:35; Galatians 5:22). So let love go up, and let the flag come down. It’s time. Past time.

Dr. Tony Evans uses football metaphors to explain race relations in his article Succeeding by Working Together across Racial Lines.

God has a team. It’s made up of African-American, Anglo, Hispanic, Asian, Middle Eastern, and a variety of other people and cultures. He never wants you to make your distinction, your history or your background, so precious to you that it messes up His team. Nor does He want you to ignore or diminish your distinction, your history or your background, thus leaving little with which to contribute to His team.

The reason is that God has a goal. He has an agenda—a kingdom agenda. He has given us the playbook for His kingdom agenda, and it is called the Bible. He has done this so that we, when executing His plays, will put His glory on display. One way this occurs is when the world looks on and sees brothers and sisters in Christ huddling together across racial, cultural, and generational lines.

…When we as Christians, celebrating our differences, join together as the house of God representing the kingdom of God for the glory of God, we get the response of God to our presence in history. We get to experience the power of oneness.

What do you think? Would the removal of the Confederate flag be a mere gesture, or an act of selfless love? How can southern Americans embrace their heritage without alienating their black brothers and sisters? How can we work toward that “power of oneness” in these tense and difficult times? Leave your thoughts below!
Debbie Holloway is the Family Life Editor at Crosswalk.com
Publication date: June 25, 2015