Hayden Christensen to Star in 90 Minutes in Heaven 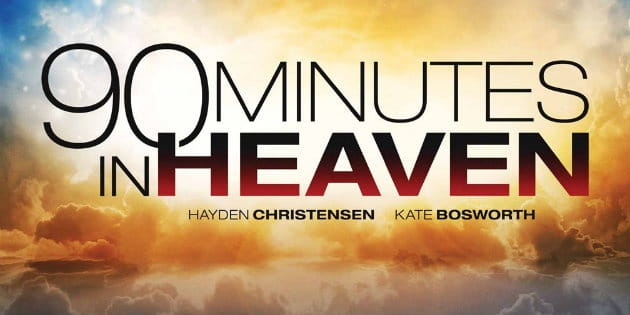 Christians have always been enamored with the idea of Heaven. What will it be like? Who will we meet there? As Casting Crowns once so eloquently pondered, “Will we dance for you Jesus, or in awe of you be still?” These are questions that have lingered in the hearts of believers since time immemorial.

Given this environment, it’s no surprise that more than a few stories about Heaven have sprung up over the years. Many have even transitioned onto the big screen. Heaven is for Real, the real-life account of a pastor whose son claimed to have visited heaven, was a hit that grossed several million dollars on opening weekend alone. While some Christians consider these testimonies dubious at best, others feel they provide opportunities for witness in secular circles. Regardless, an article from Deadline confirms “heaven films” are here to stay.

According to Anita Busch, Hayden Christensen (who most will recognize as Anakin Skywalker from Star Wars: II & III) will play Don Piper in the upcoming film, 90 Minutes in Heaven. Based on a book of the same name, the movie will detail Piper’s near-death experience after a horrific traffic accident. Busch writes,

“Piper’s story begins on January 18, 1989, when a semi-tractor truck crushed him in his car. Declared dead by the first rescue workers to arrive on the scene of the collision, his body lay under a tarp for the next 90 minutes. At the moment he was hit, simultaneously, he was surrounded by a host of people who had preceded him in death (including his grandfather). He was also encompassed by white light, the most beautiful aromas and colors he had ever encountered, love, and joy beyond the human experience. ‘I was embraced by God. I felt His presence. I saw His angels,’ Piper told Deadline. He was afraid to tell people what he experienced at first for fear he would be judged. ‘When you put yourself out there and start to talk about the experience you had, you become very vulnerable. And people will make fun of you, and ridicule you. I get that, but it did happen. I wouldn’t have believed it myself if it didn’t happen to me.’”

“As he tells Deadline, ‘I waited 14 years to write the book. It was a sacred secret,’ said Piper. ‘I reluctantly put it down on paper with the hope that I would be able to move on with the remainder of my life on earth. I was 38 when the truck hit me. I had 13 months of laying in a hospital bed.’ When Piper eventually was revived, he experienced excruciating, debilitating pain and emotional turmoil.”

90 Minutes in Heaven will doubtlessly receive much scrutiny from Christian audiences. Though we know God is capable of all things, we have also been warned to be as shrewd as serpents (Matthew 10:16). However Piper’s film is received by critics, we can only hope it will inspire viewers to consider Christ, and meditate on our eternal destination.

To view the trailer for 90 Minutes in Heaven, click here

What about you? What are your thoughts on this upcoming movie?