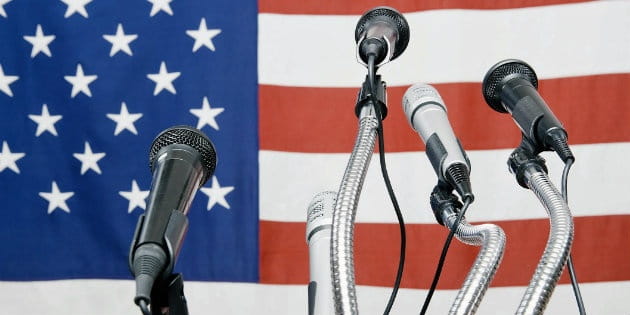 I picked a terrible year to become politically active. This presidential election has easily been one of the most divisive campaigns in recent memory. Not only has the hostile rhetoric and blatant dishonesty split our country down the middle, American Christians have found themselves walking a fraying tightrope between a candidate they despise, and God’s command to love their neighbor. Some have even wondered if they should vote at all. So it was with a heavy heart that many people tuned in to watch the first presidential debate.

Most viewers probably had preconceived notions about the candidates before they saw the debate, and it’s unlikely these changed after an hour of fruitless dialogue. Still, as Christians, we find ourselves pondering how to respond after the dust has settled. Matthew Tennant, of Baptist News Global, believes we need to take ourselves out of the election mindset and approach things as peacekeepers rather than combatants,

“In Acts 15, Peter, Paul and James entered the Jerusalem Conference with different ideas about what is required to be a Christ-follower. After discussing the issue, the three leaders, along with others, arrived at an answer. Too often, politicians foster division, instead of finding solutions. The first presidential debate was no different. Theology rarely transitions smoothly into politics, but God does love the world (John 3:16). Therefore, policies that promote good for the world and the people in it are the most theologically sound.”

While reflecting on the presidential debate, Tennant counseled fellow believers to take theological action. His advice, along with that of Crosswalk editor Carrie Dedrick, can be found below in three unique responses,

“First, listen more. Paul Tillich writes, ‘In order to know what is just in a person-to-person encounter, love listens. It is its first task to listen.’ Knowing Christ means knowing the high value the biblical Jesus placed on listening. Neither candidate listened well to the other. Christians can model better listening, especially to those with whom they disagree.”

Carrie Dedrick writes,“How do we navigate such a time as this? By remembering that God is still sovereign. Don’t let the election distract you from the fact that God is more powerful than any human or group of people that comes against us...”

This election is going to be tough, but we can’t let that change who Christ has called us to be. Regardless of the outcome in November, Christians must continue to share the gospel with joy and compassion. The Kingdom of Heaven is not dependent on an American leader, for if the Lord is with us who can be against us?

What about you? What were your thoughts during the presidential debate? Be sure to leave a comment in the section below.