Nativity Scenes are SO Unrealistic (but SO Necessary to Notice!) 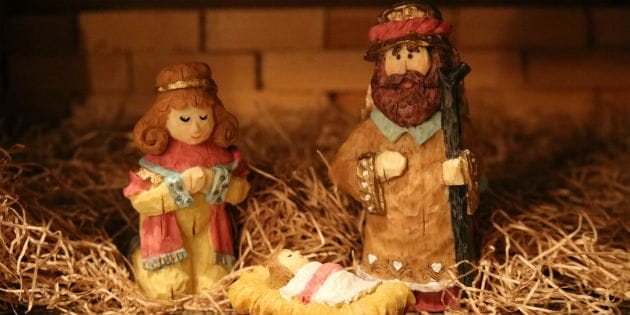 Growing up, my favorite part of decorating for Christmas was setting up the nativity scene. I loved unwrapping each character, pulling them carefully from their bubble wrap pouches out of the styrofoam box to make sure none would lose a limb or a shepherd’s staff accidentally. I would arrange all the people and the animals differently year to year, but I always especially loved putting the little baby Jesus in the center and sliding the angel’s long trumpet into her open hands as she knelt by the side of the whole scene.

I loved the whole picture of the nativity scene-- it just seemed so perfect, so peaceful, so carefully arranged and beautifully displayed.

As I’ve grown older, though, I’ve started to realize how unrealistic the nativity scene is. It’s a beautiful picture, yes, but I started to see it as too simple, too glossy, too basic for such a big, marvelous, world-changing event.

How could a pious, peaceful Mary figure, a strong Joseph figure, a few diverse, decked-out magi and a few barn animals really tell the story of Christ’s birth well?

I started to think the nativity scene shouldn’t even be part of our decorations this time of year-- it just didn’t seem to be enough, and I found myself wanting to tell people the real truth of the story that the nativity just couldn’t capture.

Alistair Begg once dismissed nativity scenes as “unrealistic and trivial” too, but he shares in a recent article “Why I Changed My Mind on Nativity Scenes” that he no longer feels that way. I’m encouraged by his words, and reminded that there is much that is good about the nativity still.

“As society becomes increasingly secular, it seems to me that just about anything that ties Christmas back to the historical account of Jesus’s birth provides an important point of connection,” Begg says. He argues that the nativity scene doesn’t say anything like, “This moment changed everything. This night, heaven broke into earth. This was a night of glory and terror and pain and majesty and awe, all centered on the Son of God in human form taking his first breath, crying his first cry, invading earth to save his people...” but that it’s important and meaningful nonetheless.

In a culture that tends to be much more fixated on Santa this time of year, the visual reminder of the nativity scenes pull us back to the heart of this Christmas season and the most incredible gift of all.

Admittedly, the nativity scene fails to fully capture every gritty or glorious detail about that night. I’ve never seen Mary looking exhausted like most new, young mothers do after laboring and giving birth. I’ve always seen the wise men there on the scene, even though it likely took them months or even more than a year to arrive to see Jesus. I’ve always seen the cows, donkeys, sheep, and other barn animals, which is also unrealistic. “Since they likely weren’t even in a stable or barn, the chance of having animals around would be even slimmer,” this “5 Things Christians Get Wrong about Christmas” article points out.

In recent years, there have even been debates and outrages sparked by nativity scenes in public places, but Begg says “the person who gets annoyed by public nativity scenes is someone I want to have a conversation with.” While non-believers can find these scenes upsetting or disruptive, many believers don’t think of them much at all.

“How easy it is to rush through the whole Christmas experience—the music in the mall, the services in your church, the presents in your house—and be left with sweet sentiments but no real worship in your heart,” Begg says.

What the Bible says (and what the nativity shows) shouldn’t be something we can boil down to a picture-perfect scene that we never have to think about. We shouldn’t dismiss the nativity display because it might be inaccurate or because we’ve seen them every year since we were children and they’ve lost their novelty. This scene should stir us, whether we fully believe in Jesus or not. It should prompt us to pursue the true “reason for the season” in the midst of all the hustle and bustle.

“The claims the Bible makes about the first Christmas are either fact or fiction, so they’re either awesome or offensive,” writes Begg. “They should move us to worship or to resistance.”

I no longer look at the nativity scene as just a fun cast of characters to unpack or as just a peaceful portrayal of that holy night, and I no longer dismiss it as a too-simple representation of a pivotal event in history… I now see the nativity as a powerful tool in sharing the good news of Jesus Christ with the world in an accessible way.

If non-believers are upset by the nativity scene, I, too, want to have a conversation with them about what they are wrestling with when it comes to seeing the birth of Jesus Christ on display. I want to hear more about what seeing Mary, Joseph, and a baby in a manger stirs up inside of them, and I want to share more about how that night has changed everything for me and my faith.

I don’t want to be the kind of Christian who dismisses the nativity scene anymore, even though I know it doesn’t capture the full Christmas story.

“This Christmas, think about what this messy scene of God’s grace means to you,” challenges Begg. “Ask non-Christians and other friends what they make of the nativity in your neighborhood. Ask what they make of the baby at the center of it all, and tell them who he is to you. Seize the opportunity to connect this pivotal historical moment to today.”

What do you think about the nativity scene? Do you display one in your home during Christmastime?