5 Things to Do before You Respond to That Hateful Email 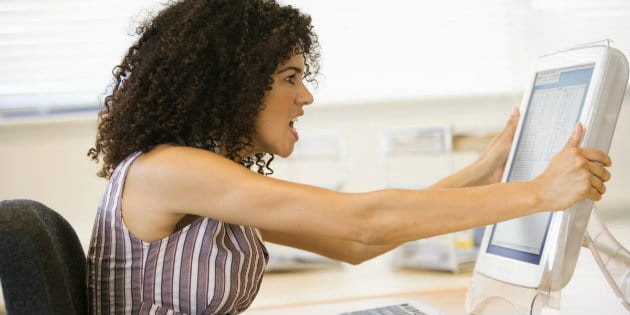 This morning on my way to work, the car in front of me was cut off by another vehicle that decided to swerve into the exit lane at the last second. What made this worse was that the incorrect driver seemed to think it was being cut off (morning traffic logic) and blared its horn at the driver who was actually being cut off. This of course ensued a horn blaring war, with the incensed correct driver stopping right next to the incorrect driver to shake his fist and honk some more. And as the correct driver finally decided to move on, the incorrect driver got one last blare in before its intended hearer got out of earshot. They both thought they were correct in the initial traffic mishap, but in the end both acted poorly with their impulse reactions. They wanted to make sure the other driver knew they were in the wrong and they were determined to set them straight even though all it did was slow everyone else down as we were forced to watch the pointless showdown.

We see the same kind of reactions when it comes to Internet postings on social media and emails. I watched theses two cars battle it out with their horns this morning, but it’s even easier to voice our outrage in the world of online forums and comment sections. Usually whatever the initial “discussion” was supposed to be about gets lost amidst the desire to take the other person down and smear them through the mud as the final victor.

Thom Rainer, president and CEO of LifeWay Christian Resources, says though the Internet has brought us increased commerce, information, communication it also allows  “cowardly critics to hide behind a keyboard and cut people to the core through blogs, social media, and email.”

Rainer provides some tips on how to respond to Internet bullies or those we disagree with in his blog post, “Five Steps to Respond to a Hurtful and Hateful Email,” on thomrainer.com.

Anger is likely your first reaction upon reading something rude or mean, and even though it may be justifiable…stop and pray. Prayer helps take the focus off of ourselves and helps us to separate the situation from our hurt feelings. I recently heard a pastor on the radio say that we all need to toughen up a little; he talked about how Jesus didn’t respond with outrage and sensitivity when He was insulted. We know that Jesus had righteous anger (per the tables in the temple story), but think of all the other times in the gospels we read about Jesus being insulted and challenged. Jesus never got into shouting matches with His accusers; His patience with the people who wanted to take Him down is unmatched. When you pray, ask the Holy Spirit to help you have a heart and mind like Jesus. Pray that God would diminish your anger so you can think clearly, and ask for wisdom in how to respond. Rainer points out that this is the time to also pray for the one or the ones who attacked you.

Even if you feel like prayer has given you an epiphany for what to say, do not respond right away. You are likely still not in the right mindset; even though you probably felt better after prayer—you may still get caught up in the emotion of your response. And simply reading the remark again could stir up your anger; so put your response or comment aside for a little while—it will still be there should you desire to send or post it in a few hours or the next day. Rainer says it is beneficial to wait for “a more tempered perspective” as well as input from others.

Depending on the level of hurt or hate in the email or comment you may find this helpful, or you may wish to move on to step 4 if you feel like your situation is too minor for discussion. But what this step is not about is gossip. Getting godly counsel should not be an excuse to vent your frustrations and badmouth the emailer or commenter. And this is hard…because venting will make you feel better, but in your desire to form a godly response you must put your desire to be like Jesus above your desire to feel better. And getting godly counsel doesn’t mean you can’t be strong in your response; Rainer writes,

“I eventually responded strongly, but nothing like my original thoughts. The wisdom of others saved me from writing something I would have likely regretted for a long time.”

Words are hard to take back because they will be remembered, even if they are forgiven. The world of online posting only makes this harder, especially if you can’t delete what you wrote.

4. Decide to respond or ignore.

You have a choice; you can formulate a response with a loving heart or you can choose to move on and ignore the email/post/comment. If you go the route of ignoring, and this is a person you see in your community, don’t let the ignoring turn into a cold and unloving shoulder. You can lovingly avoid someone whom you know stirs up controversy; part of this is refraining from speaking badly about them to others. But if they confront you in person, be prepared to respond with grace but also firmness in love. Rainer advises,

But if you decide to respond, Rainer recommends taking this last step.

5. Call or meet with the critic if possible.

If you’re an introvert or someone who hates confrontation, this probably sounds horrendous. It’s so much easier to type something up; it allows you to disconnect slightly from the situation and the person. It can also be a protection shield, at least you won’t have to hear their voice or look them in the eye. But if this is someone you know, or will see in your community, Rainer says

“…meeting face-to-face is ideal, and talking by telephone is better than a written response. Many critics are taken aback when they see the willingness of the person they attacked willing and desirous to meet with them.”

If it’s not someone you really know, then maybe the route of not responding is best. But if they continue to hound you for a response and you think a response is worthy of the situation, then after following the above steps write something that glorifies God and shows understanding of the person’s point of view even though you disagree. Don’t respond if the only validation is making yourself feel better.

Crosswalk.com Contributor Scott Slayton agrees in his article “Should You Correct a Foolish Person or Stay Silent?”:

“The potential for quarreling and misunderstanding only escalates because often we state strong opinions and then feel the need to defend them instead of hearing legitimate pushback from people. If someone says something foolish and wrongheaded on social media and you feel that you must respond to them, find a time to meet in person or talk on the phone so you can hear each other’s voices.”

As much as we’d like to avoid confrontation there is something to hearing someone’s voice on the phone, or looking them in the eye if possible. It reminds you that you’re both human, both sinners, and hopefully both saved by the grace of God. If the other person is not saved then keep that perspective when disagreeing with them or responding to them. Christians and non-Christians will have disagreements, and Christians and other Christians will have disagreements. But we can learn to disagree well with Christ in our hearts and God’s glory as our motive.

“You will get those ‘nasty-grams’ from time to time. Remember the wisdom of Proverbs: “A gentle answer turns away anger, but a harsh word stirs up wrath” (Proverbs 15:1).

It’s not always the easiest path, but sometimes it’s the best and most godly path.”

Related articles:
5 Things Christians Need to Stop Saying on Facebook
Should You Correct a Foolish Person or Stay Silent?
The 10 Commandments of Facebook
7 Questions to Ask before Posting Politics on Social Media