Why the Solar Eclipse Will Make You Feel Amazed 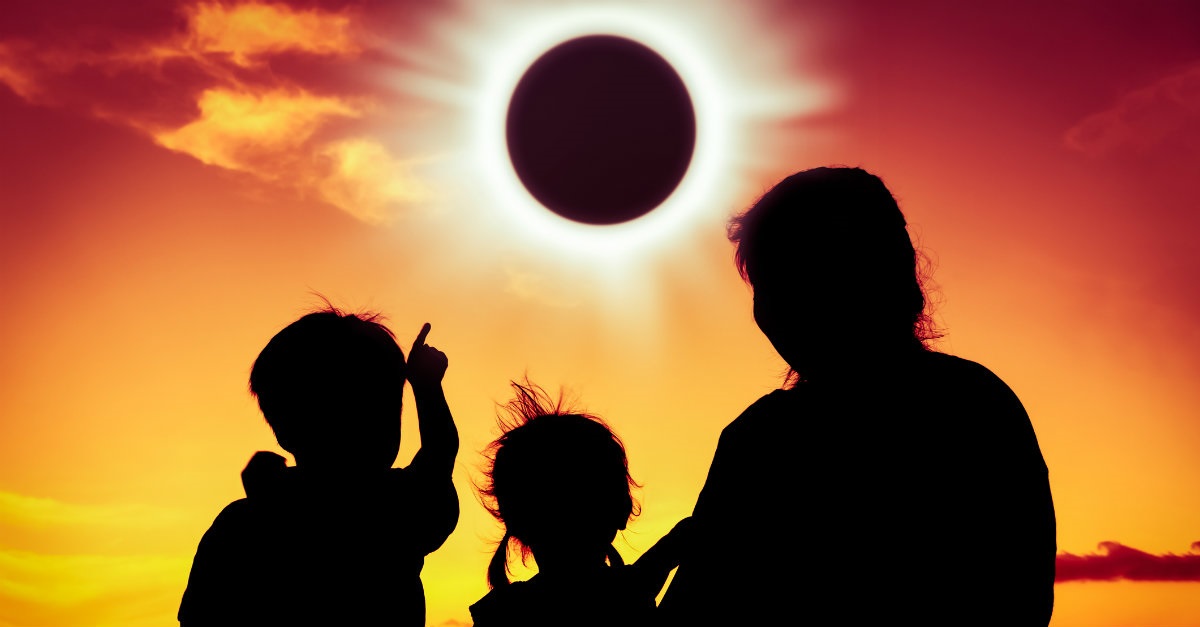 In case you haven’t been watching the news, reading articles online, listening to the radio or taking note of the increased traffic in your city…something big is happening today! Today, everyone in North America will be able to see—though some will have better views than others—a total eclipse of the sun. In the US, the last eclipse occurred in 1979 and the next one won’t be until 2024.

A solar eclipse is when the moon travels between the sun and the earth, causing the sun to be partially or totally blocked out for a certain period of time. This can last up to three hours, but for today’s eclipse Joe Carter for The Gospel Coalition reports that the complete block will only last two minutes and forty seconds in any given location.

Carter has written an article for TGC titled 9 Things You Should Know about Solar Eclipses. Here are a few things to keep in mind:

If you’ve been waiting to see a solar eclipse, congratulations you’re on the right planet! So pull up a seat and prepare to be wowed by God’s creation.

Carter comments,
“Neither Mercury nor Venus has moons, so they have no eclipses at all. Mars has two moons but they are too small to block out the sun. Jupiter, Saturn, Uranus and Neptune all have moons that are large enough but these planets are made of gas so you couldn’t stand on their surface to see the total eclipse.”

Carter quotes astronomer Hugh Ross:
“I don’t think it’s an accident that God put us human beings here on Earth where we can actually see total solar eclipses. I think God wants us to make these discoveries. I would argue that God on purpose made the universe beautiful, and one of the beauties is a solar eclipse.”

3. Looking directly at the sun is dangerous, even during an eclipse—except for the brief total phase of the eclipse (2 minutes and 40 seconds).

Carter reminds us,
“During an eclipse, looking directly at the sun is unsafe except during the brief total phase of a solar eclipse.  When the moon is completely obstructing the sun, the light emitted is only electromagnetic radiation. The only safe way to look directly at the partial eclipse is through special-purpose solar filters, such as “eclipse glasses” (compliant with the ISO 12312-2 safety standard) or handheld solar viewers. You can also look at it indirectly through a pinhole projector. If you want the safest viewing method, NASA will be live-streaming the eclipse from 11:45 to 4 pm EDT.”

Trevin Wax, another contributor for The Gospel Coalition, says he will be watching the eclipse today…but he wonders why he doesn’t stop and ponder the glory of God’s creation more often. Wax sites C.S. Lewis as someone who was very much attuned to the wonder of God’s creation, and he quotes Lewis here:

On the last day of 1939, Lewis describes a magical evening, noting the stars and planets

"I thought I had never seen this place more beautiful. Just behind me a moon, the colour of a harvest moon, was rising: the sky was blazing 'with few, but with how splendid stars', Jupiter among them: the grass was frosty: into the dimness ahead stretched the white concrete slabs of the path leading the eye on to the dark gable-end of the Kilns proper. An absolute enchantment . . ."  –from the collected letters of C.S. Lewis

Eric Metaxas, Christian author and news contributor for Fox News, encourages us to think about God’s grand design of the universe. He has written an article titled Are Solar Eclipses Proof of God? Some planets don’t have a moon as we’ve noted earlier, and some have moons that aren't the right size; others have no solid surface to stand on…but Earth…Earth has one moon that happens to be the right size and the right distance so that when a solar eclipse occurs both the sun and the moon look like they’re the same size producing a beautiful solar display. Metaxas shares,

“Three thousand years ago a man in Israel wrote:  “The heavens declare the glory of God; the skies proclaim the work of his hands.” That man didn’t have a telescope or a Brittanica, but he saw something many of us today still do not see. He saw a God behind it all. It may be true that seeing a Grand Designer behind these breath-taking events requires what we call a leap of faith; but it may also be true that seeing mere coincidence behind them requires an even greater leap of faith. In my mind, much greater.”

When the eclipse has ended today, don’t stop pondering God’s greatness and the wonder of His majesty in creation. Enjoy God in the beauty of His creation every day! The eclipse reminds us that we're small and God is big; we're finite and God is infinite. In His power God created the universe and everything in it; everything on this earth that we find beauty in actually points to One greater, One more majestic. Prepare to be amazed not at the eclipse but at the maker and designer of the eclipse. Amazing events in creation are designed to point us to the Creator.

“Our secular culture is convinced that science has rendered faith irrelevant, that we don’t need God to give our lives meaning and purpose. But today’s eclipse teaches us that we are not the masters of our world. All the accumulated power of our planet’s most powerful nation cannot prevent this blackening of our sky. For a few minutes, we will be shown that we are creatures, not Creator, that this world is not of our making or within our control.

And when night becomes day once more, we will be reminded that every moment of light and life is a gift from the One who ‘makes his sun rise’ (Matthew 5:45) and ‘gives to all mankind life and breath’ (Acts 17:25).

Let’s respond to God’s grandeur and our finitude by making Alfred, Lord Tennyson’s prayer our own:

Thou wilt not leave us in the dust:
Thou madest man, he knows not why,
He thinks he was not made to die;
And thou hast made him: thou art just.”

A meditation for today from Psalm 19. For the director of music. A psalm of David.
“The heavens declare the glory of God; the skies proclaim the work of his hands. Day after day they pour forth speech; night after night they reveal knowledge. They have no speech, they use no words; no sound is heard from them. Yet their voice goes out into all the earth, their words to the ends of the world. In the heavens God has pitched a tent for the sun. It is like a bridegroom coming out of his chamber, like a champion rejoicing to run his course. It rises at one end of the heavens and makes its circuit to the other; nothing is deprived of its warmth. The law of the LORD is perfect, refreshing the soul. The statutes of the LORD are trustworthy, making wise the simple. The precepts of the LORD are right, giving joy to the heart. The commands of the LORD are radiant, giving light to the eyes. The fear of the LORD is pure, enduring forever. The decrees of the LORD are firm, and all of them are righteous. They are more precious than gold, than much pure gold; they are sweeter than honey, than honey from the honeycomb. By them your servant is warned; in keeping them there is great reward.  But who can discern their own errors? Forgive my hidden faults. Keep your servant also from willful sins; may they not rule over me. Then I will be blameless, innocent of great transgression. May these words of my mouth and this meditation of my heart be pleasing in your sight, LORD, my Rock and my Redeemer.”

Will you be watching the solar eclipse today?
If so, don’t forget your special glasses (avoid fakes); you can also photograph it with your phone, or see it through a pinhole viewer. For those who are still worried about safety, dislike crowds, or are experiencing cloudy conditions today, you can live stream it on NASA’s website.

But most of all, may today’s eclipse point us to God’s incredible and unending glory.

Liz Kanoy is an editor for Crosswalk.com and will be viewing the eclipse safely today.