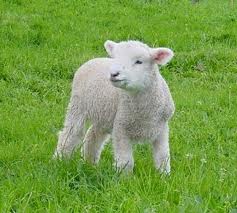 Today is the day people celebrate "Palm Sunday".  This is when Jesus entered Jerusalem riding on a donkey as the Jews welcomed him with waving Palm Branches shouting "Hosanna, Blessed is He who comes in the Name of the Lord, even the King of Israel" (John 12:13 NASB). But what is the significance for us?

To answer that, you have to go back a bit to what was happening politically when this event took place.  The Roman Empire was the occupying force of this region of the world.  For centuries the Jewish population who had been in captivity under the Assyrian Empire, the Babylonian Empire, the Persian Empire, and Greek Empire, had waited eagerly for a Messiah.  This would be a deliverer from the lineage of one of the ancient kings, David. It's like Gondor waiting for Aragon to take his rightful place on the throne (if this reference is lost on you, please immediately read "The Lord of the Rings" or watch the films).

There is a group of people who are so committed to following the ways of God and resisting Roman occupation, that they will commit any act of violence to fight Rome and usher in the kingdom of God led by a warrior messiah who will vanquish the evil-empire and bring in a reign of peace. They were called the zealots. Today they would be seen as religious terrorists. They were known to use a curved dagger called a sica to assassinate Romans and Jewish collaborators with Rome. They were brutal. Interestingly enough Jesus had possibly two of them as a part of his 12 disciples, or followers (Simon the Zealot and Judas Iscariot).

The symbol of the zealot movement was the Palm Branch. Waving Palm Branches in the view of Rome was a capital offense as it was seen as a symbol of insurrection against the Empire. So as Jesus enters, what is taking place is rebellion against the empire at the highest order. 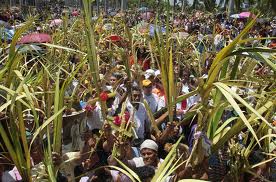 But something else was taking place as well.  It was the Jewish holy week for Passover. Four days before Passover, Jews would select a lamb. The lamb was a symbol of God's deliverance from Egypt. The family would bring the lamb into their house and raise it before sacrificing it four days later and finding salvation through its shed blood, as was depicted in their deliverance from Egypt thousands of years before.

So simultaneously you have two events clashing together.  An ancient holiday about deliverance, and a political insurrection ready to welcome the coming deliverer who will free the Jews from the oppression of Roman occupation.  All on Lamb Selection Day!

Rome was very aware of Messianic prophesies. They knew that the coming Messiah was to enter Jerusalem riding on a donkey, or colt. (Zechariah 9:9). Other pretend Messiah's had ridden on a donkey through a gate in Jerusalem called the "Sheep's Gate".  Rome had killed them all.

Now, the occupied population is waving Palm Branches as a symbol of a coming insurrection.  A man is being welcomed by them riding on a donkey according to ancient prophesy and is entering the city through the "Sheep's Gate" while these zealot masses chant "Hosanna" which literally means "Save us Now".

Rome is nervous. The people are hungry for a war. They can taste freedom from Rome. This is against the backdrop of their oldest feast which was a symbol of deliverance, and now they chose their symbol of this victory, their lamb.  On Lamb Selection Day.

The religious leaders of the Jews call for this to stop. Jesus responds that if they do stop, that even the stones will cry out (Luke 19:38-40). This is alluding to either real stones or the graveyard (i.e. tombstones) that sits just to the East of Jerusalem where Jesus is entering the city at.  But while everyone is shouting "Hosanna" and celebrating insurrection, joining the zealots in their desire for a conquering Messiah, Jesus weeps.

His tears are for the whole city (Luke 19:41-44) because He understands that the peace they desire won't come from conquering the occupying empire. It will come from the sacrifice of a lamb that brought deliverance thousands of years before.  It will come through the shed blood of one who will lay down his life so that the whole household will be delivered.

This was the teaching of the Exodus.  It is what was celebrated at Passover. The crowd was cheering for their conquering Messiah. But on Lamb Selection Day, they had really just chosen their sacrificial lamb.  They welcomed this lamb into their home and 4 days later they would participate in its slaughter.

Erik Yates is a writer at VinylTheology and a featured film critic at Zekefilm.