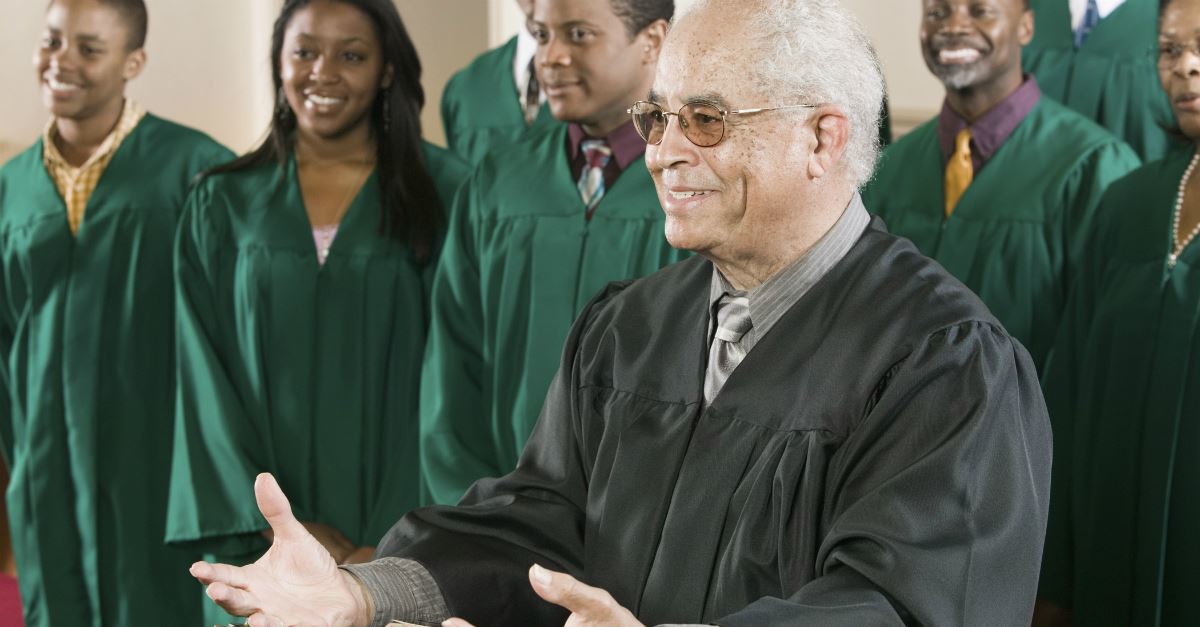 Poor Moses.  He served the same congregation for forty years.

During all that time, Moses had no opportunity for advancement. And instead of getting easier as the years came and went, the work seemed to never let up. One challenge after another. It was enough to age a fellow prematurely. Which is why, perhaps, the Lord chose a fellow who was already old–like 80!–at the start.

Think of that. Just at the time most people are getting fitted for a rocking chair and ordering their walk-in bathtub, Moses took on a new assignment.  Clearly, the Lord did not ask a committee of Israeli leaders what they wanted in the next shepherd.

Not only was Moses’ congregation the largest one around, it was the only one!

During those forty years, Moses did not receive a single raise.  And not the first award or recognition. Well,  other than from God, which as it turned out, was more than enough.

The writer of Hebrews said we should ‘consider Jesus “who endured…” (Hebrews 12:3). True. But we may also want to “consider Moses.”  He was a lot like us and demonstrates a hundred lessons on how to hang with a difficult job through good times and bad until you get the people of the Lord to the promised land.

Here are a few of those lessons.

One: Moses taught every one who would come after him how to persevere and endure. It starts and ends with one’s relationship with the Living God. Without that, it’s just a job and a difficult and thankless one at that.

“I will certainly be with you,” said God on the backside of Horeb when He called this elderly shepherd to the greatest task imaginable. Later on, Moses said, “If You don’t go with us, then let’s stop right here. For how will it be known that Your people and I have found grace in Your sight, except you go with us? That’s the only thing that will separate us from the people of the earth around here!” (Exodus 33:15-16 My paraphrase)

The Lord signaled His presence with the cloud by day and the pillar of fire by night. No one was ever in doubt that the Lord was in this place. (Oh, that His nearness was so obvious today!)

A study you will enjoy is to look at all the people the Lord made this promise to –“I will be with you.” He said it to Joshua, to Gideon, to Jeremiah, and others. It was the ultimate difference-maker!

When the Lord warned the church at Ephesus that He might remove their lampstand, whatever else that meant it surely implied that He would withdraw His presence. They would be on their own. There is no worse fate imaginable for someone trying to do the work of the Lord.

Two: Moses knew what the goal was to get these people out of Egypt, across the wilderness and into the Promised Land.  Each segment of that call had its headaches and challenges.

God said, “I have come down to deliver (my people) out of the hand of the Egyptians and to bring them up from that land to a good and large land, to a land flowing with milk and honey, to the place of the Canaanites…” (Exodus 3:8).

What’s your goal, friend? Why did God send you to this place of service? What is His mission here? If your goal is to mark time until God calls you to the next place of service, you need to return to Him and get this straight. You’ll never be able to stand against the Pharaohs of this life without a clear mandate from God as to your call.

Three: Moses kept learning how to do his job better. He was teachable.

In Exodus 18, his father-in-law Jethro gave him great counsel on sharing the load of decision-making.

Pity the minister who thinks because he is old or experienced or has held this office for years that he has it all figured out and needs no one to tell him anything.  Such pastors are burdens to their staffs and dead weights to the leadership. The man of God must be humble and teachable. Let the servant of the Lord always retain that childlike quality and never lose it.

Four: Moses could not do this alone and neither can we.

God said to Aaron, “Go into the wilderness to meet Moses...And Aaron spoke all the words which the Lord had spoken to Moses...So the people believed” (Exodus 4:27).

God gave Moses Aaron and Miriam, his siblings who had been so devoted to him from the first. Later, they each became a headache as they began to assert their rights and insist on prominence, but the Lord took care of that in short order. (See Numbers 12)

In Exodus 17: Aaron and Hur held up Moses’ arms when he grew tired, as he gave leadership to the army of Israel.

I know too many pastors with no close friends in the ministry and who treat their staff and lay leadership as underlings. Not good.

Five: Moses was a man of prayer. Without his times of heartfelt, earnest talking with the Lord God, he would have wilted early on.

Rarely, if ever, does Scripture call what Moses did “prayer.” He simply talked to God, as “face to face,” as one put it.  (See what God said about this in Numbers 12:8.)

Check out Moses’ prayer in Numbers 14. After Israel refused to believe God and enter Canaan from fear–fear of giants, standing armies, walled cities–the Lord was ready to give them up. That’s when Moses interceded. “Lord, forgive them. After all, You said you were longsuffering and abundant in mercy, that you forgive iniquity and transgression. So, how about doing it!” (My version of Numbers 14:17-19).

Moses was quoting God’s own words from Exodus 34:6-7.  When we pray, we would do well to stand on the Word of God concerning all that we claim and ask and believe.

Six: Moses was a man with a tough hide. They criticized him, persecuted him, and tormented him. He kept his focus.

From the first, the people started in on him. No sooner than they had left behind the swirling waters of the Red Sea which swallowed up Pharaoh’s army than they began belly-aching. “The people complained against Moses saying, ‘What shall we drink?'” (Exodus 15:24). “Then, the whole congregation complained against Moses and Aaron in the wilderness, ‘Oh, that we had died by the hand of the Lord in the land of Egypt...” (Exodus 16:2-3).

Moses said to the people, “The Lord hears your complaints which you make against Him. And what are we? Your complaints are not against us but against the Lord” (Exodus 16:8). That’s a huge point which every servant of Christ should keep in mind and teach to God’s people. Complaining may be the national pastime of many church members, but the Lord is neither amused by nor does He look with kindliness upon such behavior.

Even so, the servant of the Lord must assume the criticism will come. Some of it may be deserved and he/she must consider it and grow thereby. But criticism that is undeserved is just part of the process and should not be taken to heart.

Knowing what criticism to receive and what to dismiss requires Holy Spirit discernment.

Seven: Moses was human. He cried to the Lord and did his share of belly-aching. But he kept the faith.

In Numbers 11, Moses complains to God. “Why have you afflicted me? Why have I not found favor in Thy sight, that You put such burdens on me? I didn’t birth these people! How can I get enough resources to feed them? For they weep all over me….”

They weep all over me. We smile at that. But ask any longtime servant of the Lord.

Been there, seen that.

How to handle the constant griping and harassment of God’s people?  Read Matthew 10:16-42.  Read it again and again until its promises, warnings, instructions, and cautions are fixed in your mind.  You will not find anything in Scripture better or more helpful than this.

So, servant of the Lord, keep your eyes on Him.  Keep bringing yourself to the cross.  Daily place yourself on His altar.

And one more thing, perhaps the biggest of all.  Each day thank God for finding you faithful by allowing you to serve His great people.  He has honored you.  So, thank Him.

I know, I know.  They don’t feel so great most of the time. And it feels more like a burden than an honor. But in your better moments you know He has honored you by the call to shepherd His flock. So, give Him thanks.  And give it your best.