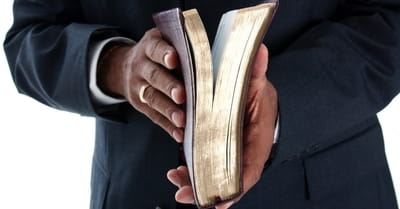 On a social-media platform the other day, pastors admitted their reluctance to address homosexuality for the obvious reasons: it is such a hot-button issue, good people differ, and the historic Christian position is becoming more and more a lightning rod.

I’m a Southern Baptist. I’m a Bible-believing conservative follower of Jesus Christ. I find nothing in Scripture to support homosexuality or a lifestyle consistent with that practice. Not a word. (I need to say that up front because some might question this from what follows.)

Pastors need to address such issues as homosexuality, transgender, and same-sex marriage in their sermons. No church wants or needs a steady diet of it, to be sure, but neither should we shy away from these hot potato issues.

Here are some thoughts on how a pastor can do this and live to tell about it:

I would pray, pray, and pray some more.  Don’t preach on anything without a clear lead from the Father.

I would spend a lot of time studying I Corinthians 6:9-11, particularly where Paul says, “Such were some of you, but you were washed, you were sanctified, you were justified.”  Clearly, Scripture teaches that the sanctifying work of the Holy Spirit can give one victory over the lifestyle he has just described: “fornicators, idolaters, adulterers, homosexuals, sodomites….”

Wait on a clear word from God.

I would not preach on the subject until I had a clear word from the Lord on how to deal with these texts and this subject.

I would admit the dilemma facing Christians.  We are to “speak the truth in love” (Ephesians 4:15).  We are to speak the truth, yes, but we are to do so in love. Truth without love is harsh and unyielding; love without truth is just so much sentimentality.

I would read the sermons of other pastors on the subject. This is one of those times you will give thanks for the internet!

I would talk to pastors I respect, asking what they did and what would they do.

Tell a story in your sermon.

In the body of the sermon, I would tell a story. See mine below. A story is always a great way to offer the truth one is delivering. Jesus told stories. See how Nathan the prophet did this when he confronted King David about his adultery (2 Samuel 12).

Once I had decided on the thrust of the sermon, I would run it by a few mentors–not for their approval, but to have them see what you may have left out, what you might be missing, how it could be strengthened.

Gather the courage of leaders.

Finally, before preaching the sermon, if I felt there was any possibility for misinterpretation or for the enemy to use this, I would pull together a few key leaders and share with them the essence of the message. You’re not asking for their approval, but you want them to know this is coming and to be prepared. Obviously, you want them to stand with you. A courageous pastor is a precious thing, but he must be surrounded by equally courageous lay leaders.

And I would pray some more. Ask the Lord to use this to give light to His people and encouragement to those struggling with the issues in the sermon.

As always, if you have to err on one side or the other–law or grace–I’d choose to err on the side of grace.

You’re not asking or expecting everyone to agree.  You are definitely not asking the world to be impressed or to approve your message.

And if the local media gets wind that you are preaching or have just preached on this subject, if they call wanting to interview you on the subject, personally, I would reject the invitation. Your sermon is a shepherd’s loving message to his flock, and without that context, the enemy can and would play havoc with it.

A story I sometimes tell on the subject of homosexuality….

Will used to drop by my office once or twice a year to talk. He admitted to being a homosexual, had been raised in a Southern Baptist church not far from us, and watched my sermons on television. He had decided I was someone he could talk to. As always, I tried to speak the truth to him but  in love.

Will told me he advised his gay friends to find ways to support themselves so they would not be dependent on the whims and prejudices of the culture around them. We were, after all, in the Deep South.

One day, my wife and I were shopping the car lots around town in search of a used car for her. I was surprised to find Will working at one of the lots. He was attentive to my wife, friendly, and helpful. Thirty minutes later, as we drove away she said, “Will is so nice. I want to introduce him to Cindy.”  I said, “Uh, honey. I don’t think you want to do that,” and told her why.  She was surprised.

Within a week, Will was in my office. “Let me tell you what happened,” he said.

A customer at the car lot was interested in a pickup truck Will was selling. When Will told him its price, the man said, “You’ll sell it to me for a lot less than that.” “I’m afraid I won’t be able to,” Will countered.  The man said, “Oh yes, you will. If you don’t, I will go in and tell the boss what you are and what you’ve been doing.”

Will said to the man, “You won’t have to do that.”

He cleaned out his desk and walked out of the car lot and drove home. That was the end of his selling cars.

I’ve found myself wondering about that mean-spirited fellow. Did he call himself a follower of Jesus Christ? Was he a member of someone’s church?

Let us pray the Father will enlighten us and help His people to do the right thing always, in this and every other way.