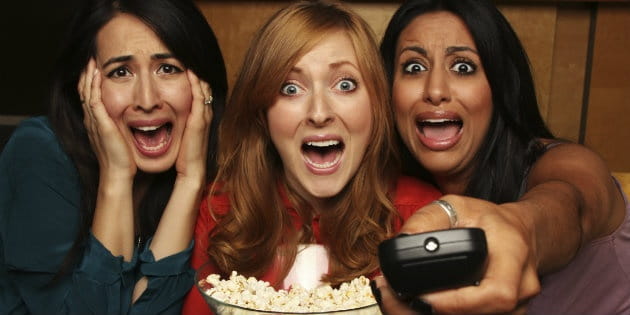 I’m going to be honest. I despise horror films; I stay as far away from them as possible, muting commercials and closing my eyes during previews. When I was in high school, if my friends wanted to watch a scary movie, I simply closed my eyes and fell asleep. Yet, there are some people who delight in horror films, for the adrenaline rush and “fun” of it. I still prefer not to have nightmares of knife-wielding dolls…

Victoria Le Sweatman, blogger and RELEVANT Magazine contributor, has written an article titled “What Horror Movies Teach Us About Christianity: Taking a second look at a much-maligned genre. Sweatman brings up a valid point about Christianity and the horror film genre,

“While it may seem counterintuitive, there probably isn’t a film genre (excluding movies produced by Kirk Cameron, anyway) that more consistently or explicitly references Christian ideas and iconography than the horror genre”

“Between The Exorcist, The Conjuring, The Exorcism of Emily Rose, Rosemary’s Baby, The Omen, Signs, Thirst, and The Wicker Man (to name just a few), it would seem that the grimmest and goriest of genres is also often the one most inspired by Christianity.”

Horror movies are gory and scary, but there’s usually two different categories: the realistic ones and the farfetched/would never happen in real life ones. Both scare me, but the realistic ones are one eerie step ahead. There’s something about a realistic horror movie that says, you’re not safe, don’t ever think you’re safe because this could happen to you…

Sweatman shares 3 reasons Christians don’t have to be afraid of the horror film genre:

1. Horror Remind Us of Our Mortality
The horror genre relies on the fact that its audience believes in right and wrong; that the audience will cringe at violence and depravity and that they understand consequences and mortality. Sweatman shares,

“Others have pointed out how horror, more than any other genre, deals explicitly with issues of good and evil. But even more than that, absolutely no other film genre is premised on the conviction that there is such a thing as absolute morality.”

“After all, what would there be to find horrifying if you could not definitively say that anything was bad or wrong? There is no such thing as horror—true horror—in a morally relative universe.”

2. Horror Depicts the Consequence of Siding with Science or Man over God
The horror genre shows us the shortcomings of science and the supernatural (apart from God)…that we cannot rely on ourselves for salvation. In many horror films we see a mad scientist-type character that is self-righteous; this character truly believes their way is best, and they want to be the best. In fact, they want to be their own god. Yet, in every single movie we see their methods backfire, and in the end everyone cheers for their demise. There’s usually something they’ve missed; they’ve been so wrapped up in themselves or their idols that they’ve missed the bigger, greater picture. Sweatman writes,

“Other horror films, like The Exorcist, come at this point from a different angle, demonstrating that purely scientific means are not adequate to explain spiritual events. A movie like The Exorcist—as controversial as it is—also shows that, contrary to the mad scientist characters who try to seize power from God, God in fact manages to work His will through very flawed, human servants. Through the extraordinary actions of ordinary individuals, the film acknowledges self-sacrifice as a kind of supernatural event, one that points to the ultimate salvation in Christ.”

3. Horror Shows Us Our Depravity
Most of us aren’t mad scientists but that doesn’t mean we’re not just as depraved. There’s a reason why we need salvation and a reason why Christ had to make the ultimate sacrifice. There is something even more horrifying than the vilest horror flick… Sweatman explains,

“But the joy and relief of salvation can only be fully appreciated after we have grasped the horror of human sin. Horror movies—whether they feature ghosts with unfinished business or serial killers with a literal ax to grind—challenge us to confront sin in all its ugliness. Having the chance to remember our fallen natures can remind us to be grateful for Christ's sacrifice and to call out to Him for redemption from our own sins.”

You can read Sweatman’s full article at relevantmagazine.com.

To clarify, Sweatman is not encouraging readers to rush out and see the next horror film; she states, “There's a big difference between a movie that preys on fear for its own ends and a movie that uses fear to get at something deeper, and Christians have a special responsibility to be discerning of that difference.” Christians should use their best judgment in choosing a horror film to watch, just as they should for any other film genre.

Crosswalk.com’s Stephen McGarvey shares a quote from Christian horror filmmaker, Scott Derrickson (The Exorcism of Emily Rose), on his blog:

Sweatman shares this sentiment, "In a similar way, good horror movies don't just exploit our fears; they show us glimpses of truth through our fears. What's more, even horror movies that don't directly draw on Christianity can offer unique insights into godly existence that Christians might not find in other genres."

While I, myself, will not be going to a horror film anytime soon, I can appreciate the genre a little more. Movies with allusions to immortality and glorified, inconsequential self-righteousness can do far more harm than movies reminding us of the consequence of our depravity.

What is your take on the horror film genre and Christianity?