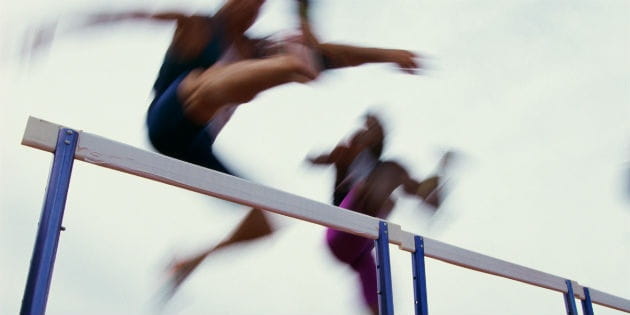 It was never a dream of mine to make it to the Olympics. I was never the MVP of my sports teams, never the one leading the charge to victory. If another person made a break for the ball, I gladly let them have it. If someone challenged me on the field, I yielded immediately.

I don’t have a competitive bone in my body.

Watching the Olympics this year, I see competition at its finest. I see the very best of the best from all over the world battling it out for a spot on the podium, putting everything on the line just to try to win.

I see that competitive nature on display in Christians too, even when gold medals are nowhere to be found.

Is competition like that healthy for us? Is it okay for us to compete against each other?

“Are Christians allowed to be competitive?” Sophie de Witt asks in her latest article on TheGoodBook.com. When our aim is to be the very best and the winner, she wonders: “Is that an unhealthy attitude for Christians?”

She offers this challenge for all Christians, no matter what realm of competition we may find ourselves in:

“Am I taking part in the competition to raise my position among my peers in order to boost my sense of significance, or am I taking part to grow and reach my full potential in that particular skill, in God’s strength, for his glory? Or in the case of “fun” competition (like playing a board game with the family), is my aim to help grow relationships and openness as we battle it out together, rather than to impress people and gain their admiration?”

Several moments from this year’s Olympics come to mind when I read those words.

I think of David Boudia and Steele Johnson, synchronized platform divers from the United States who won silver. “We both know our identity is in Christ,” Boudia, 26, said. Johnson, 20, added, “Going into this event knowing that my identity is rooted in Christ and not the result of this competition just gave me peace. And it let me enjoy the contest. God’s given us a cool opportunity, and I’m glad I could come away with an Olympic silver medal.”

I think of the race where long-distance runners Nikki Hamblin of New Zealand and Abbey D’Agostino of the United States collided. Instead of charging ahead and leaving the other behind, D’Agostino helped Hamblin up, and the two went on to finish the race, showing what many have called “true Olympic spirit.”

I think of Simone Manuel, the first African-American woman to medal individually in an Olympic swimming event while also setting a new record, who came out of the pool saying “All glory to God.”

All of these Olympic athletes, at what is likely the fiercest competition of their careers, showed us what it looks like to strive for their fullest potential while also glorifying God.

Being competitive, whether in athletics or in fun or in our faith, doesn’t have to include arrogance, anger, or selfishness. We can be competitive as Christians while still loving well, showing grace, and supporting others.

"Competition can be good in many areas of life where it encourages excellence and efficiency rather than mediocrity or sloppiness," de Witt says. "It provides goals to work towards. It helps employers in assessing who the best candidate is for the particular role. Competition can even foster unity; a striving against each other but towards the same goal, such as the team members who compete against one another in training so they can spur one another on to improve their game and increase the chances of the whole team winning."

As Christians, our common goal is to further the kingdom of God here on earth so everyone will know he is Lord. Like Hebrews 10:24 says, "Let us think of ways to motivate one another to acts of love and good works."

Let's give all the glory to God as we push onward and strive to be our best at all we do for Him in our lives.