What The Good Place Gets Wrong (and Right) about Heaven 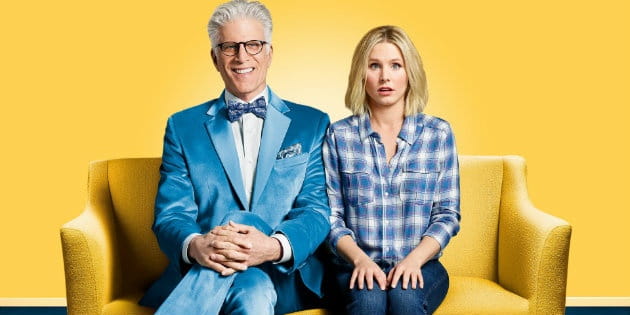 NBC’s latest comedy, The Good Place, is not a Christian show. The pilot episode playfully sidesteps any talk of religion by creating its own version of the hereafter. Still, Christians shouldn’t be too quick to judge this fledgling series. In its attempts to bypass awkward conversations about faith, The Good Place ironically stumbles upon a number of biblical truths concerning God, Heaven, and grace. In fact, some might even call the show a modern parable.

It all begins when Eleanor Shellstrop learns she has died and arrived in paradise. According to Good Place orientation, every human action has a positive value (planting an endangered tree, remaining loyal to the Cleveland Browns) or a negative value (committing genocide, using “Facebook” as a verb). At the end of life, your total value is added up, and only people with the very highest scores make it into The Good Place. For everyone else, it’s The Bad Place. So what’s the problem? Eleanor is not the death-row-freeing lawyer higher management believes she is.

Truth be told, our spunky heroine can’t even be called a heroine. While on Earth, Eleanor defrauded the sick and elderly, routinely lied to her friends, and spent each day being utterly selfish. By all accounts, she deserved a one way ticket to the land of fire and brimstone. It’s a fact which doesn’t square well with Eleanor, who insists she was at least a morally average person in life,

“I should get to spend eternity in a medium place,” she fumes, “Like Cincinnati!”

As viewers, it’s easy to judge Eleanor for her selfish lifestyle, but the uncomfortable truth is we don’t belong in Heaven either.

“For all have sinned and fall short of the glory of God” - Romans 3:23

Jesus made it pretty clear nobody can earn their way into Heaven, no matter how many endangered trees they plant. All of us have sinned and none of us deserve to be in the Good Place, but like Eleanor, we try to argue that the things we’ve done aren’t that bad.

“So I once stole money from my Mom’s purse, it’s not like I killed someone!” or “Yeah, I picked on that kid in high school, but joined the Peace Corps later, so it all balances out.”

Heaven doesn’t take excuses. Our very nature as human beings excludes us from entering God’s kingdom. The only way any of us will see Heaven is by the grace of Jesus (Ephesians 2:8), something which is both undeserved and independent of good works. Perhaps the best example of this can be seen in Matthew 20, in which Jesus tells of a vineyard where the workers were paid the same regardless of how long they worked,

“But he answered one of them, ‘I am not being unfair to you, friend. Didn’t you agree to work for a denarius? Take your pay and go. I want to give the one who was hired last the same as I gave you. Don’t I have the right to do what I want with my own money? Or are you envious because I am generous?’ ‘So the last will be first, and the first will be last.’” - Matthew 20:13-16

The truth is, we are all Eleanor Shellstrop. We don’t deserve the radical mercy that’s been shown to us, and nothing we say or do will ever change that. All we can do, is put our trust in the grace of someone who came and died for us all. Only by grace can we see ourselves as equal beggars at God’s doorstep, hoping for the Father who will take us in his arms, and bring us home to the good place.