3 Ways You Can Help Victims of the Houston Flood Disaster 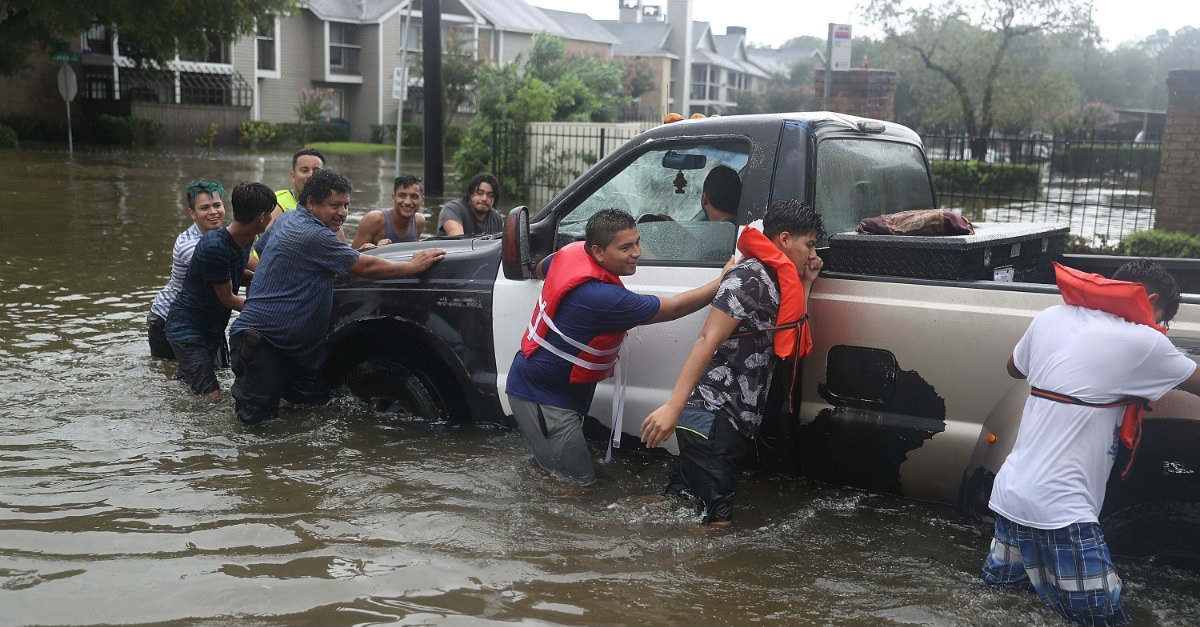 Hurricane Harvey, the most powerful hurricane to hit Texas in over 50 years, has turned Houston into a disaster zone. With unprecedented rain and flooding, neighborhoods and communities are left struggling to pick up the pieces. People are walking in waist-deep water, cars have been flooded and stranded, and homes have been drastically damaged. And it’s not over yet… J.A. Medders, Texas pastor and writer for The Gospel Coalition, has contributed an article titled “From the Flooded Grounds of Houston.” He reports,

“Meteorologists expect the storm to linger, dragging its rain across our city throughout the coming week. First-responders are working nonstop, risking their lives to rescue others. More than 2,000 rescues have been performed, and with days of rain to come, countless more are in store.”

While FEMA and other first responders are doing their due diligence for the city, Christlike instincts are rising from everyday citizens. Medders comments that civilians are assembling kayaks, boats, and “big ol’ Texas-style trucks” to save their neighbors as well as strangers. Church buildings are opening their doors to provide relief; Southern Baptists are uniting with other Christian organizations to provide help to those in need. According to Medders,

The body of Christ is stepping up with “boats, trucks, chainsaws, trailers, cookies, muscles, time, and prayers ready for those hit hard by Harvey.” Everyone is needed in the body of Christ, and Houston is seeing a beautiful display of gifts coming from open arms. Medders expresses,

“Christians, we should be at our best when affliction does its worst.”

Yet, despite all of the ongoing relief efforts, many Houstonians are still trapped in their homes and neighborhoods, unlikely to get out for days. Joe Carter, for The Gospel Coalition, shares a few things we need to understand about flooding in Houston. The Houston flood could easily become one of the worst flood disasters in US history.

The first thing we need to understand about a flood disaster is how a flood works; basically the water accumulates faster than the soils can absorb it or the rivers can carry it away. Carter explains, “Because Houston has tight clay soils, making difficult for the land to absorb water, the area relies on runoff to handle relieve flooding.”

To deal with runoff water Houston maintains miles of roadside ditches, storm sewer pipes, sewers, grates, and even the roadways serve as drainage systems. All of these systems in place are designed to carry the excess water to watersheds, which empty into Galveston Bay and eventually the Gulf of Mexico, according to Carter. These watersheds are supposed to drain into major creeks and bayous (a slow-moving small river or large creek); Houston contains 22 bayou systems and waterways. But when these water systems can’t carry the water away fast enough, flooding ensues.

Carter also reports that many areas of Houston were built on floodplains, which means the land is flat and adjacent to a stream or river that experiences occasional flooding. Unfortunately, it was too late to move communities and buildings, once this had been marked on a map in the mid-1980s. To read Joe Carter’s article in its entirety, 7 Terms You Need to Know to Understand the Houston Flood, please visit TheGospelCoalition.org.

"This morning, a local official called the flooding caused by Hurricane Harvey 'an 800-year event.' The National Weather Service describes the damage as “unprecedented” and 'beyond anything experienced.' According to the Insurance Information Institute, flood damage may equal that of Hurricane Katrina, the costliest natural disaster in United States history."

Prayer is never overrated. Take time out of your day, to pray specifically for Houston, anyone you know that has been affected, the relief teams, the churches opening their doors and most of all for people to show Christlike love to one another.

Anytime you see a picture on social media, or an article talking about the devastating effects…stop and pray. God is listening; ask God to move this storm away from Houston—ask Him to put people where they need to be so they can help those in need. Medders encourages,

“Pray for the mayor of Houston, Sylvester Turner. Pray for the governor of Texas, Greg Abbott. Pray for first-responders and all involved in rescue efforts. Pray for the afflicted. Pray for the churches and our efforts to be Good Samaritans and good witnesses.”

Medders trusts these local churches to use their relief funds appropriately to help as many people in their communities as possible:

Other reputable organizations include the North American Mission Board, Samaritan’s Purse, the Billy Graham Rapid Response Team, and Somebody Cares International.

Other ways to help include sending supplies to Texas Food Banks, donating to the Houston Humane Society, and if you live in the area giving blood at Carter BloodCare or the South Texas Blood & Tissue Center.

Apple and the Red Cross have also partnered together to accept donations through iTunes.

"...experts are predicting that 450,000 will be in need of disaster relief" spanning from Corpus Christi to Rockport to Houston.

FEMA is anticipating years of relief work; this is an opportunity for youth groups, college kids, and local mission agencies to serve in shelters, food banks, as well as helping to clear neighborhoods. Mobilize a team from your local church to come alongside those in Houston—to not only help with construction and basic needs, but also to share the hope of Jesus Christ. Medders shares,

"Our Father promises us, “When you pass through the waters, I will be with you” (Isaiah 43:2). His word assures us, “There is nothing in all creation that will ever be able to separate us from the love of God which is ours through Christ Jesus our Lord” (Romans 8:39, GNT).

If you’re a parent, do you love your children less when they face catastrophe? Or do you find tangible ways to make your love real to them in their pain?

Rescuers have saved thousands of people across the Texas Gulf Coast. Donations from across the country are supporting relief agencies. One ministry Janet and I have already supported in this crisis is Texas Baptist Men Disaster Relief, which is in the midst of the largest Texas response in its fifty-year history.

No one can do everything, but everyone can do something. Your church can partner with churches and ministries on the front lines of this unfolding disaster. You can give time, money, and resources to help those who have lost everything. And you can pray fervently, asking God to redeem this tragedy by using the “body of Christ” (1 Corinthians 12:27) to share the love of Christ with millions in need."

Related articles:
5 Things to Remember When Natural Disasters Occur
Help for Facing Life's Storms: 7 Promises of God
'A Storm that the United States has Not Seen Yet'

Image courtesy: People push a truck down a flooded street after the area was inundated with flooding from Hurricane Harvey on August 27, 2017 in Houston, Texas. Harvey, which made landfall north of Corpus Christi late Friday evening, is expected to dump upwards to 40 inches of rain in Texas over the next couple of days. Photo by Joe Raedle/Getty Images