Spiderman Super-Hero or War Hero: My Grandpa Saved the President

Spiderman Super-Hero or War Hero: My Grandpa Saved the President 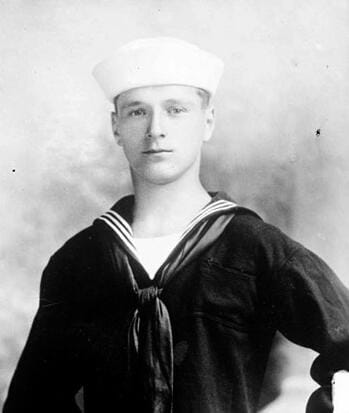 Batman, Spiderman and Iron Man are idolized by children around the world. Secret identities, arch-nemeses and superpowers characterize the "SuperSomebody" we want to swoop down and save our ailing world. My Grandad would never wear a shiny leotard. He certainly couldn't fly. But he dodged bullets for America's freedom and rescued the President of the United States.

The tiny skiff sailed across the English Channel in the foggy dead of night. Icy winds and frothy waves tossed the boat from side to side, nearly capsizing the fragile vessel. But my grandfather, 19-year-old Ralph Waldo Tacker, kept a steady hand at the helm even though his fingers were numb from the cold. He was carrying precious cargo -- President William McKinley. The bodies of brave sailors encircled the commander-in-chief to provide warmth and protection. A heavy black tarp covered the craft so enemy patrols would suspect nothing more than a lonely fisherman trolling for tomorrow’s catch. Grandpa arrived at the English shore just before dawn where a cracker-jack escort greeted President McKinley and whisked him to safety.

“Boy,” my nickname for my grandfather, seldom spoke about his Navy days in the heat of World War I. But the carnage he witnessed forged a strong faith in God and formed him into a remarkable man. Tough as nails and fiercely protective of those he loved, this man in my life was my mentor and my champion. I climbed up in his feather bed awaiting his colorful tales of “Geewhizzicus’” and “Wallygoppers.” He curled his big bicep and made his Navy ship tattoo undulate up and down his arm. Three little ducks adorned his right foot to remind him of his salty days at sea.

I now know that his love for Jesus and his steely courage sustained him as he witnessed the carnage of wounded soldiers suffocated by mustard gas and maimed by bullets piercing sinew and bone. The blood-soaked bodies were piled into his vessel and rushed to the safety of British hospitals across the briny waterway. Boy never mentioned the atrocities he witnessed. But his wartime days motivated him to cherish every moment and live his later years with unmitigated joy.

Juxtaposed on his life’s canvas of grief and loss were brushstrokes of another man. Boy was a creative and accomplished musician. My sailor Gramps tooted the Sousaphone for none other than John Phillip Sousa himself. He bellowed peppy marches under Sousa’s artful baton. Can you imagine? He played “Stars and Stripes Forever” the first time it was ever performed! What a remarkable experience!

But I didn’t know feisty Ralph during his stint in the Great War. I knew the man of persevering faith he became. He opened his arms wide to welcome his granddaughter and twirl me until I was too dizzy to stand. Yet even as a five-year-old, I noticed the limp he carried from a wartime wound.

On the Grandpa scale from one to 10, Boy was an 11. His belly laugh woke the neighbors. His rich, chocolate-covered bass voice bellowed “Bringing in the Sheaves” in his church choir. And his boisterous humor and brilliant exposition of the Scriptures peppered the Sunday School lessons he taught week after week after week.

I recall scooting around his coffee table, barely able to stand on my rubbery legs, noticing the huge Bible -- marked with his handwritten scribbles in the margins lying open on the glass top. That Bible was always in his hands or on the table before him. He served as a deacon in his church until he was too weak to leave his bedroom.

My grandfather knew me better than anyone. He prayed for me constantly. I’ve been told that I started shaking my booty to rock and roll before I could talk, so Boy assumed my fondness for “dancing” showed musical promise. He purchased a toy piano and showed me how to tickle the ivories with my chubby index fingers. Boy was my biggest fan. He taught me to worship God with reckless abandon, and watched me pursue a career in Christian music for the next 20 years. He always attended my recitals or sat in the congregation cheering me on as I played, sang or conducted.

I sadly recall his last day of life. His booming voice had become raspy and quiet. Boy smiled and squeezed my hand as I approached his hospital bed for the last time. “Julie Girl,” he said, “Why don’t we sing Amazing Grace together?” I tearfully joined him in the words, “When we’ve been there ten thousand years, bright shining as the sun, we’ve no less days to sing God’s praise than when we’ve first begun.”

I am God’s child because of Grandpa Boy. And I live in a country where I can freely express my faith in Christ because of Boy’s bravery and sacrifice. Thank you, my wonderful hero! I still miss you every moment!