Breivik’s Blood Is Not On Us

Breivik’s Blood Is Not On Us 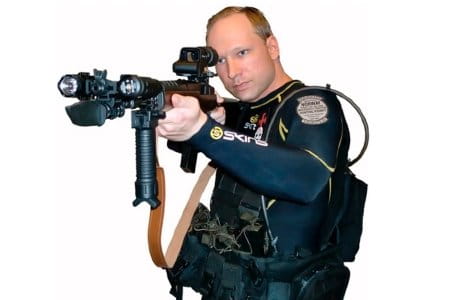 The blood of those killed by Anders Breivik is on the hands of Anders Breivik, and no one else. That insane animal is no more a Christian than I am a Muslim. Less. There’s a lot about Islam that I get, that resonates with me; I can identify with what is happening in the heart and mind of a Muslim. The heart and mind of Anders Breivik is a broken, twisted, blood-soaked mess. I can no more identify with or understand what is happening inside his demented, dysfunctional brain than I could breathe with my head buried in sand.

Breivik raves that he’s a Christian. He leaves behind a 1,500 page rant, now practically de rigueur for the killing spree set. Who cares? Why do we for a moment treat as credible or even interesting the proclamations and “writing” of a guy so psychotic he blew up and mowed down almost one hundred innocent people? How is it that committing mass murder doesn’t automatically cancel the possibility of having your thoughts and sentiments taken seriously? Yes, many right-wing conservatives in Norway are concerned about their country’s growing Muslim population — just like many right-wing conservatives in America are concerned about our country’s growing Mexican population. People have all kinds of social and political concerns. But just because a well-armed psychopath slaps one of those concerns onto his gun before he starts spraying everywhere the blood of others doesn’t make him a legitimate contributor to the conversation surrounding that or any other issue.

To the media, Breivik claiming to be a champion of Christian values gives the story of what he did legs like Jackie Joyner-Kersee. A lone nutjob snaps and starts killing people? Good — but not great. But a lone nutjob who snaps, start killing people, and says he’s doing it because as a good Christian he wants to strike a blow against Islam?

Now you’ve got something that will move units, bring eyeballs, sell ads.

And the guy’s good-looking? Pffft. It’s like having a money-minting machine in the break room.

“See what the right-wing agenda has wrought!”

“He was part of a vast conspiracy of fundamentalist Christians who won’t be happy until the world is rid of Muslims!”

“His blood is on the hands of all Christians!”

That people sort of instinctively consider Breivik normal is touching and even encouraging. They assume he must have done what he did as a sort of rational response to a set of reasonings or motivations that are grounded in and defined by the same sort of reasonings and motivations that informs the lives of everyone in the world who isn’t a mass murderer. Being utterly helpless to conceive of anyone as depraved as Breivik, we do the only thing we can do, and cast him in our own image.

That’s a mistake. A very sweet mistake, yes. But a mistake.