From a Christian Woman Who Chose Abortion

From a Christian Woman Who Chose Abortion 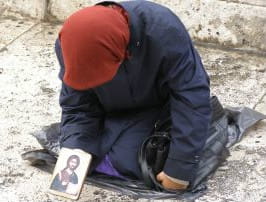 Got this in a couple of days ago:

I don’t really know you well enough to share this, but there will never be anyone in my own church I could share it with. The article you did on abortion [Christians and abortion: what are we, babies?] really touched my heart.

I was once a judgmental Christian who, on one occasion, even got up before a congregation and gave my testimony about how thankful I was that I had not ever had an abortion, and never would.

This was just after a very very dear friend of mine had decided to have an abortion. I felt smug and somehow better than her — like somehow I would have made a better, more godly choice than she did.

Well, I lived to regret every word of that perfect Southern Baptist testimony, when, in years to come, I faced the very thing that I had been so sure was so wrong.

Many times I have wished that I made the choice I did because I was in a life or death situation. I think I even told myself, many times, that I was in such a dire situation. But that is just not true. There were circumstances that were unusual, but not physically life-threatening. I had just had a baby; he was four months old when my father died after spending a month on life support. I didn’t even know I was pregnant until about a week after my father’s funeral. I had been given every kind of sedative and tranquilizer medication during that month and after the funeral. I was left with a broken mother, three kids under six years of age, a husband out of work, and a very shaky marriage. I had complications with all my pregnancies, but no one told me my life was at risk. No one said, “It’s your life, or your baby.”

I prayed, “Dear Lord, I cannot do this. What am I supposed to do? Do I give up my three children, and my mother who needs me desperately right now?” Because I knew that, in the mental state I was in, I would not make it through another pregnancy. So I quickly made the arrangements and went through the process like a robot.

My youngest son, who will soon be 25, was four months old when I had the abortion. (Wow … I have never written those words before.)

I have lived with the shame and disgrace of what I did for twenty-four years, and basically condemned myself as a murderer unworthy of God’s love.

I lost my precious mother in 2005 without ever sharing my story with her. She would have been the one person who would have never judged, but I just couldn’t bring myself to do it. I have held it in and let it hold me back all this time. I regret the act and I regret all the things that I might have done if I had not let the guilt hold me back. I have sold God short on what He was capable of doing just to punish myself. That will end up being my biggest regret and burden.

But I have never given up on God. I continue to read the Bible, and ask for His guidance for my own understanding. I try to live my life in service to my family and to others, but not a day goes by that I do not feel unworthy of any of the many blessings I have. Each day I wake up with that guilt and shame that I will never truly be forgiven. Not because God will not forgive, but because I stood up in front of people, and said what I thought I believed — and then did the exact opposite, because I did not have a clue what I was talking about.

Now, everyday, I hear people talking about what a sin abortion is, as if it is the only sin (except maybe being gay) that will send us to hell. And I don’t think about myself, but about my dear friend, and how hard it must have been for her to go through that process without my full support. I never told anyone about her decision. But she knew that I did not approve of it.

She died a few years later of breast cancer. She was like my sister, and a wonderful person. She never pretended to be anything she was not. She was like the rest of us — just doing the best she could with what she had at the time. I deserve to be judged, but she did not. So I will always stand up for people who honestly thought they were doing the right thing.

Thank you for at least demonstrating that not every Christian turns their back on people who make mistakes.

God bless you and your ministry.

Dear woman who wrote me this:

My God. How you have suffered.

So the house of your grief has four walls: for your unborn child, for your departed friend, for your parents, and for your separation from God.

That’s a dark house, sister, a cold place to live. I’m so glad you wrote me. It means you’re moving toward the door of those unhappy quarters: that the sun and Son are beckoning you to come outside and start a better, warmer life.

You’re a Christian. And so you understand the raw, visceral horror experienced by Christ on the cross. And you know why that awesome sacrifice transpired. You know that God incarnated as Christ took into his corporeal form all of our pain, our suffering, our heartbreak, our grief, our shame, our disappointment, our misery, our fear — and obliterated all of it with the blazing white fire of his love for each and every one of us.

You know that. You know who Christ was; you know what he did; you know why he did it. And just like you know the nature and purpose of Christ, you know who and what you are. You know you’re not supposed to be perfect, unblemished, wonderful: the best friend ever, the ideal daughter, the flawless mother. You know being like that was never the plan. You know that no one ever gets to be the person they wish they were.

We were born needy and weak, and we spend our lives the same. No one gets out of that. All of us are afraid, confused, alienated, lonely, angry, selfish, appetitive, greedy, opportunistic, unjust, immoral, crazed for love. All of us are hounded by our own insufficiencies and failures.

Life, after all, is a vale of tears.

You and I and everyone else in the world were designed, ultimately, to turn to God — to come to him with our sorry lives in our hands, pleading, “Please, take this. It’s no good to me. I can’t do it. I have failed, and know I can do nothing but. Help me. I’m yours.”

And sure enough, Christs’ consciousness begins to fill us. There, at the cross, we find the relief we seek. We find solace. We find the source of the love we cannot create for ourselves.

The phenomenal thing about the forgiveness of God is that it’s very specific: it shows up with actual, specific, easily comprehensible reason behind it.

God doesn’t just forgive you; he tells you why he forgives you.

It’s obviously supremely presumptuous on my part — but, since you wrote me, let me share with you my belief as to how God sees the transgressions of yours that have for so long been causing you such grief:

Your unborn child: When you made the decision you did relative to your pregnancy, you were barely functional. You were as distraught, stressed, and grieved as a person can possibly be — and it sounds like you were suffering postpartum depression, which of course can be dangerously debilitating. And you were intensely medicated. The condition you were in was more than “unusual.” It was ruinous. I absolutely, 100% guarantee you that God forgives you for the decision you made in the condition you were in. I wouldn’t give a rat’s patoot for any god who wouldn’t. Would you? You were a mess; you prayed to God for guidance, and then you made a difficult decision. You’re not guilty there of anything. You did your job: you prayed to God. You’re innocent.

Your friend: It’s true enough that you weren’t the friend you might have been. But because that failure is emotionally tied up with the choice you later made during your pregnancy, that transgression has taken on for you a great deal more weight than it deserves. You were young when you went before your church to say how you would never have an abortion. That’s such a young thing to do: it’s so immature, so obviously an effort to be praised, to belong, to assert a winning identity. And it’s so informed by one of the primary defining qualities of youth: moral certainty. Young people can only see right and wrong in clear, black-and-white terms; they haven’t yet developed an appreciation for the infinite means by which moral blacks-and-whites become infinite shades of grey. The real failure with your experience lies with the adults who encouraged and allowed you to make such an insipid speech. An actually mature person would have told you to sit down, and be quiet. Who wants to hear a young person bragging about their moral superiority? The only reason they let you make that speech is because it served their own agenda: they essentially used you as propaganda, and no two ways about it. That’s a shame on them — but no shame to you. You’re not guilty of anything there except being young. And that (thank God!) is no crime.

Your parents: Of course it’s awful to lose one’s parents; I’m terribly sorry that happened to you. But you don’t need to feel bad anymore about not sharing with your mother the decision you made in the weeks following your father’s death. She knows now, doesn’t she? And I’m positive she forgives you that. Wouldn’t you, if you were her? You wanted your mother to think as highly of you as possible. Who doesn’t want that from their mother? I am certain that right now your mom is waiting, with God himself, to hug you long and hard, and tell you how much she loves and certainly forgives you.

Your separation from God: To me, the jump-out thought in your letter was that even though you know that God forgives you, you don’t forgive yourself. That right there is a problem; that’s a place you want to focus. What you’re doing with that calculation is putting yourself ahead of God. You’re saying that your judgment that you are not forgiven carries more weight with you than does God’s judgment that you are. It shows you’re not really letting God’s will for you be done. It means that you’re denying what Christ did for you on the cross.

That is (for lack of a better, nicer word) ego. You need to let go of that.

You are forgiven by God. Christ did die so that you could avail yourself of the absolution of God.

If you’re a Christian, you believe that.

So be a Christian. Believe that. Know that. Accept that.

Don’t keep your curtains closed against on the new day dawning. Throw them open. Let the Son in.