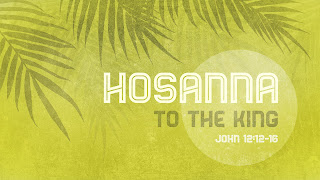 (This post comes from thoughts based on my husband Eric’s Palm Sunday message.)

On the next day the large crowd who had come to the feast, when they heard that Jesus was coming to Jerusalem, took the branches of the palm trees and went out to meet Him, and began to shout, " Hosanna! BLESSED IS HE WHO COMES IN THE NAME OF THE LORD, even the King of Israel."Jesus, finding a young donkey, sat on it; as it is written, "FEAR NOT, DAUGHTER OF ZION; BEHOLD, YOUR KING IS COMING, SEATED ON A DONKEY'S COLT." These things His disciples did not understand at the first; but when Jesus was glorified, then they remembered that these things were written of Him, and that they had done these things to Him. So the people, who were with Him when He called Lazarus out of the tomb and raised him from the dead, continued to testify about Him. For this reason also the people went and met Him, because they heard that He had performed this sign. So the Pharisees said to one another, "You see that you are not doing any good; look, the world has gone after Him." John 12:12-19 NAS

Palm Sunday is usually a joyous day - kids reenacting the celebratory waving of palms and remembering the path Jesus walked to free us from our sins! Yet, as with all of life, there was more to the story than a simple surface glance would reveal.

The crowd that cheered Jesus was the same crowd that would demand His execution later that very week. It was a crowd that shouted His praises because they saw Him for who they wanted Him to be (and praised who and what they imagined Him to be), rather than who He really was. People’s expectations are a powerful thing. And when we force those expectations on God, attempting to manipulate Him to be something for us that He is not, we worship something less than God. The journey that pathway takes our hearts on leads to a destination of idolatry. Consider the crowd celebrating Jesus on Palm Sunday-

1. There were celebrity seekers - those who had heard about Lazarus raising from the dead and just wanted to get a glimpse of Jesus (John 12:12).

2. There were king seekers - they thought Jesus was coming to usher in political freedom rather than spiritual freedom (John 12:13).

3. There were miracle seekers - those who had seen Lazarus raised from the dead and were back for more brushes with the super-natural and the sensational (John 12:18)

4. There were self/power seekers - the Pharisees were looking to “get somewhere” (John 12:19).

5. There was Jesus' disciples and true followers - they didn’t understand  everything that was going on, but their faith in who they knew Jesus to be fueled their love and devotion to Him regardless of all that swirled around them.

As followers of Christ we will probably identify with those in the crowd. And at different times and seasons in our walk, we will probably run the gamut of roles in this story. I confess there have been times when I sought Jesus because I wanted something. I wanted to see His hand work in a certain way in my life and prayed and prayed for it. I remember distinctly sensing Him deal with my issue of seeking Him for some thing rather than seeking Him for Him. Like the king seekers, many of us have probably found a passage in Scripture we expected to play itself out in our lives in a certain way, and were disappointed when the fulfillment of the Word came through a different venue. The king seekers knew the prophesy about the Messiah, they just couldn’t imagine any other way God was going to fulfill His word than for Him to free them politically. We too can take Scripture and expect it to mean one thing, when the Lord has an entirely different plan. Some of us might come to Christ because of some big event and, like those who wanted Jesus for His celebrity status, we just joined the crowd because of the excitement and hype.

Interestingly, all those pretenses people came to Him with caused Jesus to weep.

When He approached Jerusalem, He saw the city and wept over it, saying, "If you had known in this day, even you, the things which make for peace! But now they have been hidden from your eyes.  For the days will come upon you when your enemies will throw up a barricade against you, and surround you and hem you in on every side, and they will level you to the ground and your children within you, and they will not leave in you one stone upon another, because you did not recognize the time of your visitation." Luke 19:41-44 NAS

We all have reasons and motivations for seeking Jesus. Thankfully, He has allowed me to come to Him imperfectly, and He has been faithful to work through my faulty, human thinking so that more and more, I come to Him just for Him and Him alone.

Where are you in the crowd? Who's your Jesus?

Looking for more encouragement in your walk with God? 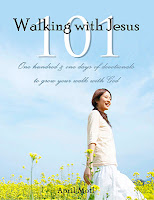 Check out Walking with Jesus 101: One Hundred and One Days of Devotionals to Strengthen your Walk with God

Most of us have wished for a Cinderella moment when we could step into a new pair of shoes and in the blink of an eye have our lives transformed. Or, perhaps like Dorothy, we wish we could close our eyes, click our heels and find ourselves instantly transported away from the adventure we accidentally got dropped into. While it might not come from new shoes or heel clicking, God knows our need for a changed life and fresh start! Discover the life transformation that happens when you say "Yes" to God and step into His fullness. Walking with Jesus 101 is a collection of devotionals journeying through the Scriptures that point our feet to God's pathway for living. What walk of obedience, leap of faith or stand of endurance might God be calling you to? He has good things stored up for His children who eagerly seek His highway for living!