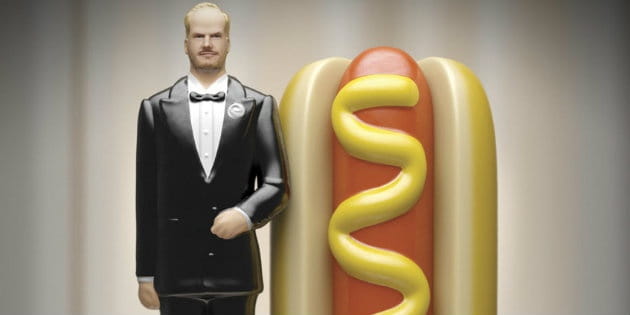 Right now, many Christians are questioning their place in American society. Culture is shifting at a breakneck speed, and people of faith are often left feeling unwelcome in the public square. This is especially true for pop culture. Finding a modern movie or TV series that upholds Christian values is uncommon, positive depictions of Christians are even more so. Yet, thankfully, there are still a number of Christian celebrities willing to share their faith so long as you know where to look.

One such celebrity is comedian Jim Gaffigan. Star of The Jim Gaffigan Show, and author of the hilariously insightful parenting book Dad Is Fat, Gaffigan is, for many, a prime example of someone who artfully balances their faith with public life. The self-styled “pale comedian” has always be upfront about his relationship with God, a fact that was showcased in a recent article on Christ & Pop Culture,

“After growing up in a nominally Catholic home, Gaffigan stopped attending church during early adulthood. When he met his future wife Jeannie, his outlook on Christianity began to change. ‘Faith is kind of like healthy eating, it’s much easier to not eat healthy,’ Gaffigan told Pete Holmes during an interview on the You Made It Weird podcast. ‘Am I perfect about it? Not at all. But I just feel like for me personally, it makes perfect sense. There’s just been too many things, there’s too much mercy that has been given to me. It escapes all logic.’”

Wade Bearden, the author of the piece, also took a moment to point out how Gaffigan does not segregate himself from secular culture either. In his eyes, a Christian cannot follow Christ without engaging the world, and cannot engage the world without finding Christ. It’s a difficult, but useful amalgamation that most Christ-followers have yet to master. His final thoughts were that perhaps instead of engaging in culture wars, Christians should expand more energy into growing a natural, organic faith like Gaffigan. He writes,

“Perhaps, all of these factors are what makes Gaffigan such an interesting character in the subject of faith and art. Rather than simply mentioning God and Christianity, and expressing indifference or disinterest in the local church, Gaffigan is ardently committed to both.”

“Gaffigan’s art garners respect from both the public and those within the entertainment industry (his show features cameos from Republicans, Democrats, and atheists—Macaulay Culkin even stops by) all while he visibly lives out his personal and corporate faith. Gaffigan seems to realize that he does have a voice in the realm of religious conversation—as evidenced from the The Jim Gaffigan Show—but his more organic approach to the intersection between his personal life and comedy creates a natural, rather than explicit, response to religious conversation and the culture wars. He’s a comedian who’s also a Christian, rather than a Christian who happens to be a comedian.”

As the world continues to change around as, Christians everywhere should take heart knowing that the Gospel will never truly be silenced. We may find ourselves speaking of Christ in strange places, to people we never expected to meet, but what matters is that the Word is still spoken. Like Gaffigan, our goal should always be to seamlessly integrate our faith into every portion of our lives.

What about you? What are your feelings on comedian Jim Gaffigan?