3 Truths You Need to Remember No Matter How You Vote

3 Truths You Need to Remember No Matter How You Vote 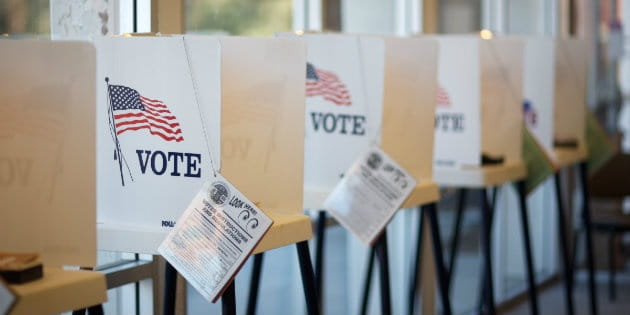 Elections can bring out the worst in us. We can become too passionate in our pleas for others to agree with us. We can point fingers at those we disagree with, or we may become so disgusted we give up on the whole thing. But no matter how you feel about the political climate in America, if you are a Christian you will always be involved in politics.

Trevin Wax, Publisher at LifeWay and Editor of The Gospel Project, has written a blog piece for The Gospel Coalition titled “3 Truths You Should Remember, No Matter What You Do in the Voting Booth.” Wax offers three truths about Christians and politics that stand true before and after the current election. No matter how we vote, it’s crucial that we as Christians remember these three things:

1. Christians are a political people who bear witness to the rule of the One True King, Jesus Christ.

Wax relays that some may talk of the church as being apolitical, but in reality the church is nonpartisan. The church can never be apolitical because our foundation is in the Lord, and He is our ruler. Wax writes,

“Christians are citizens of the Messiah’s kingdom, who gather together in local congregations (embassies or kingdom outposts) and live as ambassadors for the King. You can’t get more political than that.

Though party platforms and partisanship may be of extreme importance to you, they do not trump biblical principles or the proclamation of the gospel. When we start looking at people as made in the image of God, we can push away disagreements and proclaim what is most important: the need to bow down to our King. There’s nothing wrong with healthy disagreement and a conversation about differences, but when you find yourself more passionate about election issues than gospel issues it may be time to step back and ask yourself what or who you’re really evangelizing.

“We are therefore Christ’s ambassadors, as though God were making his appeal through us. We implore you on Christ’s behalf: Be reconciled to God. God made him who had no sin to be sin for us, so that in him we might become the righteousness of God.” -2 Cor. 5:20-21

Never in the Bible does God declare government in itself as evil; God structured human life to have order and authority. God appoints leaders and allows humans to rule in local governments, but only God’s power is declared ultimate. Chances are you don’t agree with every detail of your political party of choice, and that’s a good thing…because our identity as Christians is not found in our political party. This of course, does not mean that Christians should not be involved in local and national politics. Wax advises,

“So what should our involvement in politics be? Affirm what can be affirmed, challenge what is lacking, and denounce what is evil.”

This means whatever the political decisions and rulings are; Christians should affirm, challenge, and denounce them in accordance with God’s Word. Why? Because there are people who are lost and need to know, and there are also people who will knowingly disobey what God has set as right and wrong. And if you are a believer in Jesus Christ, then you are an ambassador for God and His authority. Call out what is wrong, and affirm what is right.

“You are the salt of the earth. But if the salt loses its saltiness, how can it be made salty again? It is no longer good for anything, except to be thrown out and trampled underfoot. You are the light of the world. A town built on a hill cannot be hidden. Neither do people light a lamp and put it under a bowl. Instead they put it on its stand, and it gives light to everyone in the house. In the same way, let your light shine before others, that they may see your good deeds and glorify your Father in heaven.” –Matthew 5:13-16

3. The Church speaks truth to power because Jesus Christ has granted believers power until His return.

“If we represent King Jesus, the One who will call all earthly authorities to account, then we ought to remind authorities of their limited role and make sure they accomplish what they are there for.

We speak truth to power because we know the truth about power. Jesus Himself has shown us how the version of power in His kingdom is radically different than what you find in the world.”

The gospels clearly tell us that, according to Jesus, the greatest among us is the one who serves. If God is the judge and ultimate ruler, then His ambassadors are called to be humble in service, to love freely, to affirm with grace, to challenge with mercy, and to denounce with truth.

“Jesus called them together and said, ‘You know that those who are regarded as rulers of the Gentiles lord it over them, and their high officials exercise authority over them. Not so with you. Instead, whoever wants to become great among you must be your servant, and whoever wants to be first must be slave of all. For even the Son of Man did not come to be served, but to serve, and to give his life as a ransom for many.’” –Mark 10:42-45

For the One who transformed your heart is able to transform the hearts of our leaders, and He is not up for reelection because He is always in office.

"The LORD is in his holy temple; the LORD is on his heavenly throne. He observes everyone on earth; his eyes examine them." -Psalm 11:4

Remember Christians, we are not called to apathy but to ambassadorship; we are called to affirm, to challenge, and to denounce government rulings according to God’s Word. But more importantly, we are called to do this in the form of a humble servant—in the likeness of our Savior and King Jesus Christ.

“Each of us must vote our conscience before God. And we must respect each other’s freedom to choose what priorities, evidence and stories we value most. I am not voting for a person as much as I’m voting for a future that most reflects my values.

Ultimately God is sovereign over this election. “The LORD kills and brings to life; he brings down to Sheol and raises up. The LORD makes poor and makes rich; he brings low and he exalts” (1 Samuel 2:6-7). On Wednesday, Nov 9th he will not care for us any less or shepherd us with less goodness or justice or mercy.”

“So lead on, Christian influencer. Even if things get so bad that you are tempted to throw in the towel, even if your every effort to love, lead, and faithfully serve your neighbors gets squashed, even if the world responds to your love with rejection and resistance, you must continue to love on and to lead on. Even if the world starts feeling to you like a sinking ship, there is good reason to find a piece of brass on the Titanic and start polishing it. For the task of Christian leaders is to remind themselves, and also those whom they lead, that neither death, nor mourning, nor crying, nor pain, nor opposition nor hostility nor persecution nor anything else, gets to dictate the story line in the Story of God, the last chapter of which has been written and published, and that has firmly solidified history’s future.”

As you decided whether to vote or not or who to vote for, remember that as a Christian you have an ongoing political involvement as an ambassador for the King of Kings. Before this election and after this election, you will be a representative for Christ. Your proclamation of the gospel and spreading the love of Jesus does not stop during political wins or losses. It is a constant in the life of the Christian.

Related articles:
Time for the Unexcited and Undecided to Finally Decide
Rejecting Fear in the Divided States of America

Christianity.com: How should Christ make a difference in the way that I vote? - Matt Staver from christianitydotcom2 on GodTube.