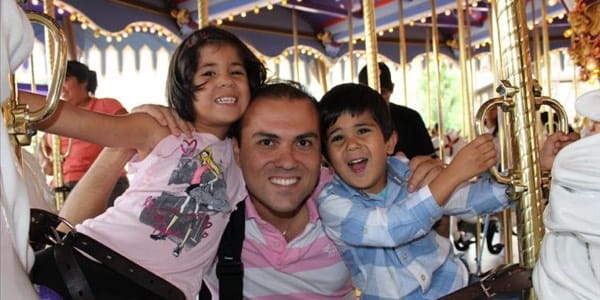 My wife recently Mod-Podged a world map to go up in our living room. She liked it as a decoration piece, but I like that I can now talk about places in the world and have my girls find it on there.

Many times recently, that place has been the country of Iran. Without prompting from us, the girls have adopted Saeed Abedini as their personal prayer mission. They ask me nearly every day if I’ve heard any news about the imprisoned pastor. I tell them about the threats he faces, how he continues to share his faith despite the persecution, and how his children begged President Barack Obama to return their daddy. I told them that perhaps Obama’s negotiations with Iran will lead to the pastor’s release.

They listen, and they pray.

Today, however, the news I tell them won’t be so good. According to Charisma News, White House Press Secretary Josh Earnest says that the release of Abedini is off the table in any negotiation with Iran:

“In a stunning comment, White House spokesperson Josh Earnest told reporters that interjecting the captive Americans into the discussions is unacceptable and that it ‘certainly would interfere with the ongoing negotiations between the international community and Iran on their nuclear program.’

“That is simply unbelievable. Refusing to discuss the Americans being held hostage by Iran at the bargaining table and rejecting any congressional attempt to make any deal with Iran contingent on the release of the Americans is unacceptable. It's quite frankly appalling.”

While it is true that any negotiations of this sort are always complex, Obama’s refusal to help the pastor seems in stark contrast to the letter Abedini sent to the President earlier this year:

"Thank you again for standing up for my family and I and for thousands of Christians across the world who are persecuted for their faith in Jesus Christ. President Obama, you have my prayers from inside of these walls. I pray for God's guidance, wisdom and blessing for you as you lead this great nation.”

Some members of the Senate have expressed their intention to make any deal with Iran hinge on the release of Pastor Saeed and three other American hostages. But Secretary Earnest suggested any such measures would face Obama’s veto.

I’m sure my girls will be praying for him on his upcoming birthday (May 7). I know they won’t be alone.

Your turn. What do you think about the White House’s position to not demand the release of Pastor Abedini? How has he inspired your faith?