I Did Not Marry My One True Love

I Did Not Marry My One True Love 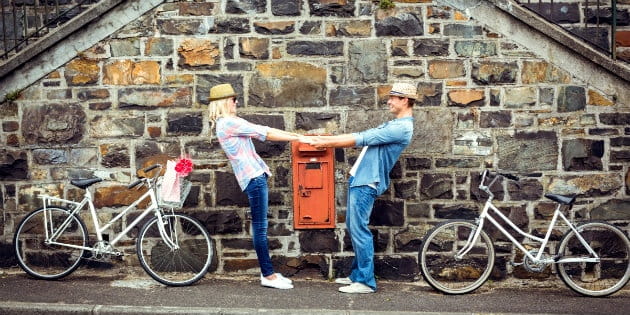 Remember that scene at the end of Jerry Maguire? Where Jerry tells Dorothy that she completes him, and she tearfully tells him to shut up, because he “had her at hello”? How about the end of You’ve Got Mail, when Tom Hanks and Meg Ryan’s characters, after battling it out as business opponents, finally realize they’re really not mad at each other… they’re madly in love! What about that scene from The Notebook? I don’t actually have a specific one in mind, because it’s pretty much just one insanely romantic moment after another.

Yeah, I’m going to go ahead and blame Hollywood for my warped perception of romance and love.

Except I really can’t. Because the Bible- my true basis for reality- tells me just how hard love really is. It’s work. It’s hard work. And being married makes it no less hard. Even if we walk down the aisle utterly convinced we’ve found our soulmate and that we’re really going to live happily-ever-after, reality won’t be too far behind.

That’s Lisa Hall Wilson’s point in her blog post, I Did Not Marry My One True Love. Although she and her husband have been married 16 years, neither of them doubt the fact that love isn’t just a happy state of being. It’s a choice. She writes:

Here’s the thing, I don’t believe in love at first sight. I do not have a true love out there. If there’s one thing 16 years of marriage has taught me it’s that the happy, life-is-perfect, bliss-mirage lasts a remarkably short amount of time and you’re left with the harsh reality that you married a human who can’t read your mind, doesn’t do everything the way you would, doesn’t agree with everything you say/do, has bad habits and irritating quirks you never saw coming.

Real talk: sometimes my husband will throw his dirty clothes right in front of the hamper. Seemingly unable to muster the effort to get the clothes inside the basket, he sees no problem putting them right in front of it, which I inevitably will have to pick up later when I go to do laundry.

Not to throw my husband under the bus alone, here’s my confession. When we were dating, I told my husband how much of a morning person I was. “Morning is my favorite time of day!” I would cheerfully exclaim, proud of the fact that while so many people were dragging their feet, inhaling their coffee, mustering the will to make it through their day, I was perkily getting stuff done, chirpy as a morning bird. So my husband rightfully assumed I would be a loving, pleasant, kind person right after I got up.

We both realized shortly after getting married that while I do love mornings, I love them because no one else is up yet. I’m actually terribly crabby any time someone invades my personal space too early in the AM.

Yup, I’m no princess. But my dear husband chooses to love me anyway.

Because love is a choice. Marriage is hard. “If you’re struggling in your marriage,” Lisa says, “stick it out. In my experience, the hard work, tears, fights — it all adds up to a history you can’t buy and only time can build. This is a marathon not a sprint.”

Not too long ago, Jennifer Maggio wrote a great piece called, “But…He completes me!” She reminds us that when we look to anyone else other than God to “complete” us, we’re setting ourselves up for disappointment (hate to break it to you, Jerry Maguire). She writes:

How unfair that we put a Heavenly expectation on any earthly being! God created us. He put a God-sized hole in our hearts on purpose – so that we would worship him. He wants us in union with him, first. He completes us. There is not a man (or woman) alive that will complete us. Entering into any relationship with this expectation leads to defeat, hurt, and a lifetime of disappointment.  Too often, we carry unrealistic measures that are certain to taint any new relationship. We say things like, “If I ever get married again, I will make certain my new husband doesn’t do that.”  We search the world over trying to find that perfect man who will remove all our burdens in hopes that we can finally relinquish life’s heavy load. And when he can’t measure up to expectations that no man could fulfill, we are outta there, looking for the next “perfect” man.

Let’s give our husbands and wives the grace they need to not be perfect. Let’s give them the grace not to complete us, because only God can truly do that.