Is Football Your Idol? 3 Ways to Know

Is Football Your Idol? 3 Ways to Know 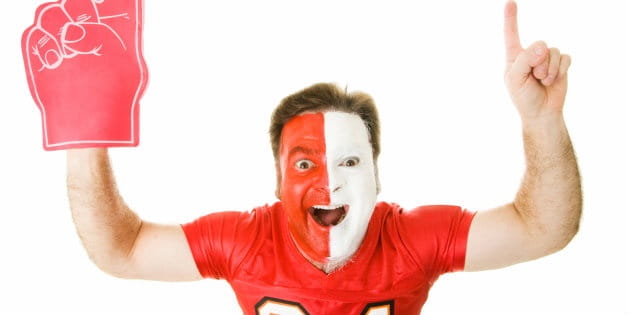 OF COURSE I don’t idolize football! I’m not even addicted to it, much less prone to making a god of it.

All I do is wear my Chargers jersey to work once a week, check my fantasy lineup first thing every morning (even on non-game days) and live or die with the on-field performance of huge men (and, in the case of college teams, boys) I don’t even know. I don’t even gamble on it! (Anymore…)

So let’s be silly for a little bit today in order to get a little bit serious in the end. Here in the U.S., American football is the national pastime. Sometimes, we don’t even shy away from calling it a religion – the professional version is played on Sundays and holidays, it’s awarded a place of prominence in our schedules, and it helps us take our thoughts off our circumstantial troubles for a while.

And while none of these things are bad in and of themselves, as with most things, there’s a line.

I’m dating myself here, but my mother used to claim I had an unhealthy addiction to sports when I would rise early, run to the end of our gravel driveway in bare feet to get the newspaper, and splay the sports section out all over the living room floor to be sure I knew all the latest scoop. "I think this is too important to you," she'd nag. "What? Why would you even say that, Mom?" "Well, for starters, you're in your underwear. You could at least put a robe and slippers on when you bust out our front door at 6 a.m."

So maybe she had a point. In my defense, it WAS Arizona, so it was rarely cold, and we DID live at a secluded end of an 8-house neighborhood…

Over at The Gospel Coalition, Kevin DeYoung has suggested Three Questions to Help Diagnose Possible Football Idolatry. I doubt I’ve ever had a full-blown case, but I’ll do my best to answer DeYoung’s questions accurately and sincerely.

"Is ministry and worship on the Lord’s Day compromised by my allegiance to football on Saturday and Sunday?"

Well, clearly not. Just this past weekend, my son’s baseball travel team had a Sunday tournament, so our family purposed to attend our church’s Saturday evening service. But then, well, but then we were kinda tired, and Michigan State and Oregon were putting on such a good show that… okay, we stayed home. But most weeks, most weeks, I would like to pat myself on the back for making sure this family gets itself to early service on Sunday so we can get home in plenty of time to take in the full seven-ish hours of NFL RedZone!

"Are my emotions all out of whack?"

Okay, now this is really getting unfair. You're asking me this a mere 35 hours after I stayed up until 1:30 a.m. (I'm almost always asleep by 10 p.m.) only to watch the San Diego Chargers blow ANOTHER double-digit, fourth-quarter lead. It’s the third straight year that’s happened in their opening game, for crying out loud! Why can't they finish the job? Where is the killer instinct? Where can I register my complaint?! Aaarrrggghhh!

On the plus side, San Diego’s ineptitude did mean their top wide receiver Keenan Allen was held in check, meaning my opponent failed to generate enough points to beat my fantasy team. And I do have an illogical sense of accomplishment and a cool buzz going from that...

"Can my conversation go deeper than football?"

Well of course it can. Haven't we already broached the Arizona climate, youth baseball, and underwear as topics this morning?

Seriously though, at least I score better on this question, but that may be because I was once privy to a discussion with a group of men from our Bible Fellowship class who expressed a sense of dread upon coming to class each week. They weren’t big football fans, and so didn’t know if they’d be able to join any pre-class discussions with any other guys.

So whenever I catch myself going too deep into football talk around a non-football audience… or letting my day be ruined or made overly glad because a team or a pretend team performed a certain way… or moving my devotional or worship time around in order to pay homage to football first, what I usually tell myself is:

And that's the key, isn’t it? We all have a life to live, and that life is defined by what is at the center, what comes first. We all, everyone, even those who claim no belief in a divine being, have a god. Something that takes precedence. Something that gives life drive, purpose, meaning. But there is only one life we can "get" which is also the Source of Life.

In a 2013 article for Crosswalk.com, Chad Gibbs, author of God and Football, looks at this slice of life in his part of the country, the South:

So we've established that God and football are both pretty big down here, but which is bigger? Well, I've got a theory.

When you attend a church here, you will almost certainly hear people talking about football. Worshipers will gather before the service and discuss in reverent tones what went right and wrong the day before. The pastor will usually reference Saturday's happenings by either praising a team's win or mourning its loss, while oftentimes taking a playful dig at the misfortunes of a rival school. Churches sometimes encourage this blending of faith and fanaticism with "wear your team's colors" day or by having viewing parties for big games — with half-time testimonies, naturally.

Conversely, God doesn't get a lot of play in SEC stadiums, unless a player injures his neck or your team is lining up for a last second field goal. And sometimes God is called upon to do some damning — usually of referees or offensive coordinators — but that's it. The SEC doesn't really have to add God or anything else to their product to fill the seats. There is no "wear your denomination's colors to the game" day.

Churches have to schedule around football.

And there's the rub. As DeYoung concludes, "Go ahead and give football a little bit of your weekend. Just don't give it your worship." Time for me to "kick off" a renewed set of priorities.