Stop Apologizing (Ask for Forgiveness Instead!)

Stop Apologizing (Ask for Forgiveness Instead!) 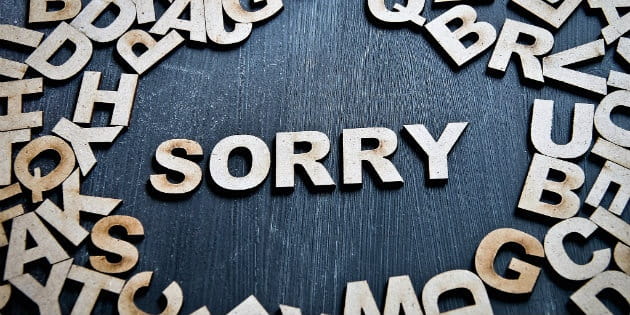 Forgiveness is one of the central tenets of the Christian faith. Most of us grew up on Sunday school lessons which encouraged us to forgive others and seek God’s forgiveness in turn.

“God showed us grace when we didn’t deserve any,” my old pastor used to say, “Therefore, we must do the same for our neighbors, and even our enemies.”

With so much emphasis put on one piece of the gospel, you’d hope Christians would have gotten at least passably good at it. Well, I’ll be the first to admit that when it comes to showing or asking for forgiveness, I fail miserably. The truth is, as much as we like to talk about it, real forgiveness is hard. Excusing someone who has hurt you takes a degree of faith few people can muster. Asking for forgiveness is even worse, since it requires you to let go of your pride and embrace humility.

Instead, most people just prefer to apologize. In a recent post for The Cripplegate, blogger Jordan Standridge noted how many Christians try to mend arguments by apologizing rather than asking for forgiveness. The difference, he says, is that an apology can be a neutral thing. It doesn’t assign blame, it doesn’t take responsibility, and it doesn’t absolve anyone of guilt. By refusing to participate in the actual process of forgiveness (either as a petitioner or an emancipator), Standridge believes we fall short of God’s glory.

“Refusing to ask for forgiveness disqualifies you from worshipping God. Matthew 5:24 says that if our brother has something against us we are to ‘leave your offering there before the altar and go; first be reconciled to your brother, and then come and present your offering.’ We must do our best to fix the relationship before we would ever think about doing something spiritual. Yet so many come to church week after week, take communion, pray, read the Bible and, believe it or not, get up and preach hour long sermons, and yet have unreconciled relationships. Jesus says that it is better not to worship the Lord than to do so while there are unreconciled relationships in our lives. Of course some people that we sin against will not forgive us. If they are believers then hopefully someone would step in and start the process of church discipline, but regardless, believers or unbelievers, our goal is to be reconciled while remembering Paul’s words in Romans 12:18 ‘if possible, so far as it depends on you, be at peace with all men.’ We are only responsible for 50% of the transaction. ‘So far as it depends on you’ is very important because if the person does not ask for forgiveness, or will not grant it, then that person is choosing to disobey the Lord, but we will have done our part to seek reconciliation.”

The line between an apology and true repentance is thin, but it makes all the difference. God doesn’t want us to simply overlook our grievances, he wants us to reconcile them. When asked, Jesus told his disciples not only to forgive, but to do so “Seventy times seven” (Matthew 18:21-22). There’s no room in the gospel for grudges or impersonal excuses. God has reconciled us to Himself, and now we must learn to do the same with each other.