The Continued Rise of the Nones

The Continued Rise of the Nones

When I wrote The Rise of the Nones: Understanding and Reaching the Religiously Unaffiliated, the most recent data revealed that the “nones” made up one out of every five Americans, which made them the second largest religious group in the United States - second only to Catholics. They were also the fastest growing religious group in the nation.

And when I wrote about it being fast, I meant fast. 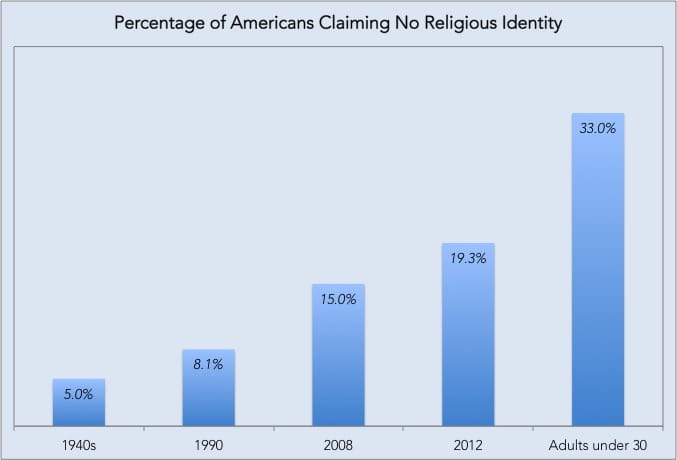 As you see in this graph, the number of “nones” in the 1930’s and 1940’s hovered around 5 percent. By 1990, that number had only risen to 8 percent, a mere 3 percent rise in over half a century. Between 1990 and 2008 – just 18 years – the number of “nones” nearly doubled leaping from 8.1 percent to 15 percent. Then, in just four short years, it climbed to nearly 20 percent, representing one of every five Americans. And when you studied only those adults under the age of 30, it went to one out of every three people.

But hold on – it’s gotten worse.

First came the figures released in March from the General Social Survey, filling in the gap between 2012 and 2014. Then, this week, the Pew Research Center released its latest findings. Both are considered the “gold standard” of research.

In just two years, the “nones” have climbed from 19 percent to nearly one out of every four adults.

(*The GSS charted the rise to around 21 percent, the Pew study at around 23 percent).

The “nones” are no longer the second largest religious group in the United States, but the largest. And still, by far, the fastest-growing.

(The Pew study still maintains that Evangelical Protestants are the largest, but they do it by pooling together several groups and organizations, instead of a single entity, such as the Southern Baptist Convention).

But wait…it gets worse.

It’s not simply that the “nones” are growing, but that the number of professing Christians is shrinking. The percentage of adults who describe themselves as Christians dropped nearly eight percentage points from the last Pew study in 2007. So now, only about 71 percent of American adults would call themselves a Christian, down from nearly 80 percent.

But wait…it gets “worser.”

And the rise of the “nones” and the fall of Christians is widespread, crossing race, gender, education and geographic barriers. Forget the Bible Belt, or the Catholic North…this is happening everywhere and across every demographic.

I have more to say about these findings in future blogs, but for now, I just wanted to get the information out there.

But I couldn’t help but think of a conversation I had recently with a man about his church.

I asked him how it was going.

He said, “Our pastor has started trying to get people to invite their unchurched friends, and started preaching the gospel.”

I thought to myself, “Good!”

“And lots of people are getting baptized.”

“And most of our leaders have left.”

He said, “They said they needed to be fed.”

There is one and only one reason why Christians are to be fed. It is so they have the strength and stamina for the mission. And that mission is clear: to be about the evangelization and transformation of culture through the centrality of the local church.

And even then, the goal is for them to learn to feed themselves, not be dependent on a church or teacher for spiritual room service.

The data released this week will be parsed many times over.

Perhaps the most obvious answer is narcissistic Christians.

James Emery White, The Rise of the Nones: Understanding and Reaching the Religiously Unaffiliated (Baker).

James Emery White is the founding and senior pastor of Mecklenburg Community Church in Charlotte, NC, and the ranked adjunctive professor of theology and culture at Gordon-Conwell Theological Seminary, which he also served as their fourth president. His latest book, The Rise of the Nones: Understanding and Reaching the Religiously Unaffiliated, is available on Amazon. To enjoy a free subscription to the Church and Culture blog, visit churchandculture.org, where you can view past blogs in our archive and read the latest church and culture news from around the world. Follow Dr. White on twitter @JamesEmeryWhite.