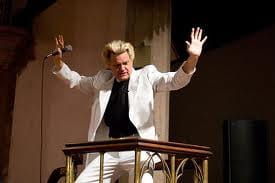 “Yes, Brother, I see that hand!”  Church leaders, like all men with feet of clay, are enticed to climb worldly ladders of success. The temptation to sugar-coat the truth in order to appear “a winner” to his parishioners and colleagues can compromise a pastor’s reliability and relationship with His Maker.

Buildings, budgets and baptisms are never far from the mind of most pastors. Fudging the numbers to boost morale is inexcusable. Whether he admits it or not, Brother Whosit always counts noses as he saunters to the pulpit to speak for God. The poor minister’s worst fear came true the moment his hairy toes hit the floor one Easter Sunday morning. He peered out of his bedroom window, and there it was, just as the weatherman had predicted. A menacing storm loomed on the horizon, and he worried the offerings would plummet on the biggest Sunday of the year because his parishioners hated to get their new patent leather shoes wet. What if they decided stay home and read the Sunday morning funnies instead, God forbid? Fred Fleming, the balding church organist blasted “Up From the Grave He Arose” with style and panache. But alas, did his congregation arise? Did they come today, on this day of days?

Then came the moment of truth. Brother Whosit’s damp congregation, the stalwart faithful dragged themselves to church, braved the rain and slinked into their pews, awaiting a word from God spoken by their fearless leader. What could he say to mask his disappointment and lift them out of their doldrums? Fearing the crowd would sink into depression, Pastor put on his best James Earl Jones preacher-voice and hoped to dazzle the crowd. “Glory to God! Praise Be! This is our greatest Easter turnout yet!!!” Please, Brother Whosit. Don’t insult their intelligence. The first two rows of the sanctuary are completely empty, and prime parking spots are vacant by the front door … not good signs for a banner Sunday.

That’s okay. We all have dreary Sabbaths now and then. They just happen. Did you have to “sugar-coat” your morning greeting?” Why couldn’t you simply say, “It’s a gloomy day, but I am so glad to see you here. We’ve got a lot to celebrate. Jesus isn’t in the grave. And we will cheat death, too, because of Him.” Concise. Honest. Caring. Inspiring.

“Sheep and goat” nose-counting is the most despicable form of evangelasticism, in my estimation. My husband was a young intern at a mega-church known throughout the city. Every staff member had to present a list on Monday morning of the people they had led to Christ the week before, so that the new converts could be baptized on the next Sunday. If a poor minister did not meet his quota, he was out on his ear by the next Wednesday. That’s when the “number-padding” began. The gospel was soft-peddled so that anybody who liked Jesus would get dunked and be counted among the chosen. During one altar call, a five-year-old boy approached one of my husband’s colleagues standing at the front of the church and asked, “Can I go to the bathroom now?” The young pastor took him. Upon returning, the evangelist shouted, “One more lost sheep comes into the fold!!! That’s 50 decisions tonight!” The crowd was whipped into a lather. I can’t imagine that God was impressed. Above all, we must share the Good News of Christ with great care and prayer. Souls hang in the balance.

Evangelastic Finance Figures. Brother Bluster often plays fast and loose with building fund results. The giant thermometer that hangs precariously over the choir tenors indicates how close the congregation is to reaching the building fund goal. Finessing financials is a real temptation for any deacon board or pastor. If the numbers go in the red, it’s hard to turn the trend around. So Bluster climbs the ladder in the choir loft and colors the thermometer in pink pastel chalk. The line of demarcation is obscured and the old people with all the money can’t even see it! Mission accomplished. Pumping up the crowd to fork over much-needed cash is a tough row to hoe. Gloss it over. Say “we’re waiting on a big gift to come in” or “we can’t be sure how much the project is going to cost.”

Now there’s a piece of truth of which I can assure you. Any pastor who has survived a building program will give you the cold, hard facts. No building will ever come in on time, at cost, without problems, headaches, nightmares or potential suicide attempts by the building committee chairperson. Beloved pastor, most people will get on board to give if you let them know you’re a person of integrity and that you say what you mean. Also, please don’t embezzle building pledges, skip town with your blonde secretary and head for St. Tropez. That tends to erode trust. I’m not sure, but I’m just sayin' ...

Evangelasticalism not only refers to stretching the truth, it also means that you don’t skew spiritual truth to say whatever you want to say. Suppository preaching involves closing your eyes, picking a passage and saying whatever comes into your mind, regardless or context, background or accuracy. Suppository preaching without serious study gives any pastor a bad case of Sunday sermon diarrhea. One of my favorite “point and pick” verse combos I heard from a preacher was “And Judas went and hanged himself...” "...Go and do thou likewise.” Great stuff.

On one occasion an overly protective father (namely my husband) wanted to be sure his precious teenage daughter was well-protected from hormonal teenage boys. The pastor’s daughter had been invited on her first date, a little school dance with an upstanding young man from the congregation. To be sure her date kept his nose clean, Preacher Dad pushed the envelope with holy hell-fire and brimstone the Sunday before her special event. He ranted about date rape, the dangers of alcoholism and teen pregnancy. Her date was so full of the “fear of God” or “fear of Dad” as the case may be, that he dumped the daughter like a hot potato. Imparting Christian values in the context of a Christian family and a church family is essential. This was not a case of stretching the truth, but skewing a viewpoint so far in one direction that a balanced biblical perspective was lost, and a faulty view of a menacing, angry God was painted. It’s natural for a dad to love and protect his daughter. As members of the human race, we are all subject to human emotions. Let’s not manipulate the Word of God to say what we want it to say, to allow Truth to be filtered through emotions of anger, bitterness, guilt or fear.

Roger, my pastor-husband, is a straight-arrow when it comes to handling the truth with great care, even when the truth is tough to handle. His sermons are the result of intense study and careful biblical interpretation. However, when it comes to sermon illustrations about his family, he has been known to take some artistic license. Evangelastical sermon illustrations were his greatest temptation.

Evangelastical sermon illustrations have been practiced by every pastor I know. In all fairness, every author, politician or newscaster uses hyperbole and caricature to make their characters funny and compelling. But ministers, go easy on your families. My Roger learned early on in his ministry that his kids (and wife) were great fodder for sermon illustrations. We were cheap, accessible and weren’t under copyright protection. The more colorful Daddy made the story, the more laughs he got from the flock. In Roger’s defense, I gave him plenty of ammo. I was a die-hard prankster, but he could turn my antics into crime scenes and natural disasters. Bill, our pastor of adult education, and I were sponsors for high school camp in the scenic White Mountains. I brought my 13-month-old daughter Bronwyn with me and rode herd over a cabin of sophomore girls. Looking back, they should have chaperoned me. Our education pastor raided my cabin full of giggly girls at midnight with two football boys and a can of shaving cream. Not to be outdone, I surreptitiously retaliated by absconding with his entire package of Hanes boxer briefs and hoisting them up the flagpole. To avoid further suffering at the hands of Bill, I packed my bags, threw Bronie under my arm like a potato sack and sought refuge in the nurse’s cabin until the end of the week. To my husband’s delight, I provided him with a great opening story for his Sunday message. But by the time he finished recounting the tale, our education guy was in jail and I had been placed in witness protection. (Just kidding!) But pastor's stories do get the sensational treatment the more that they are told.

Our education pastor, Bill Nicholson, had a great idea for any pulpiteer who loved to spin a yarn or two about his family. He suggested that my husband to create a contract with me and my daughters when preaching one of our family stories. Roger always had to ask permission of us ahead of time and verify the facts before he made us one of his illustrations or opening anecdotes. If Roger told a juicy tidbit about me, my girls, or even the family pet, he was required to pay through the nose: five dollars for a headliner, two dollars for an anecdote and one dollar for an aside and a new dog bone for our border collie. If he doctored the facts in any way, he paid double. Upon occasion, I told him he owed me a new Ferrari!

Pastors, don’t play fast and loose with the truth. Your congregation will wonder if you are like the boy who cried wolf. Can they believe you or not? So climb down off that pedestal. Don’t try to impress. Be real. You may be surprised at how forgiving and accepting your pew-huggers really are.

In a world full of spin-doctors, be the voice someone can trust. God will honor your honesty.

2We have renounced disgraceful ways (secret thoughts, feelings, desires and underhandedness, the methods and arts that men hide through shame); we refuse to deal craftily (to practice trickery and cunning) or to adulterate or handle dishonestly the Word of God, but we state the truth openly (clearly and candidly). And so we commend ourselves in the sight and presence of God to every man's conscience. Amplified Bible