John, Jesus' BFF: How to Be a Best Friend

John, Jesus' BFF: How to Be a Best Friend 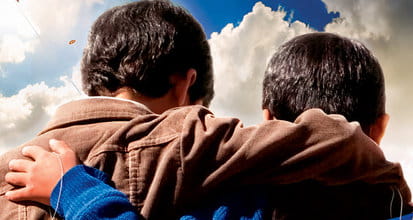 Skipping rocks on the lapping waves. Cleaning fish and playing stickball. Playing hide and seek among the olive trees. John and Jesus were probably lifelong buddies. In fact, many historians believe that John was Jesus’ cousin. According to Matthew 27:56, Mark 15:40, John 19:25, Salome, the mother of James and John, was Mary’s sister. Zebedee and Salome hailed from Capernaum, the little fishing village hugging the northern shore of the Galilean Sea. Was he Jesus’ cousin? We can’t know for sure. But one thing we DO know. John was the disciple Jesus loved. No doubt about it! And from John, we can learn how to be a best friend, too.

Best friends are committed to each other. Completely.

James and his brother John, still stinky from the stench of fish guts, dropped their nets, and left their livelihoods to follow Christ. Their wild leap of faith in following the renegade prophet was like leaving the lucrative life of small business owners to exist as penniless, fan-crazed groupies for a rock star. Nobody in Jesus’ entourage knew where the next meal was coming from, or where the next tour stop would be.

Best friends share the deepest, most secret parts of our lives.

Peter, James and John were the dynamic trio. They witnessed Jairus’ daughter leap back to life from the dead, saw Jesus “materialize” into His heavenly glory with Moses and Elijah, and mourned when Jesus sweated drops of blood in Gethsemane. Peter and John were the first to arrive at the empty tomb. John saw the shroud where Jesus miraculously “dematerialized” and laid His head napkin on the other side of the burial room. No other disciples shared these holy moments.

No best friend is perfect.

John and James were hotheads, asking Christ to call “fire down from heaven” to zap the Jewish troublemakers who sought to wreak havoc on His ministry. Egged on by his Mom Salome, James and John asked for thrones to flank Jesus when He claimed his kingship in heaven. Bad idea.

Best friends hang in there when times get tough.

John leaned on Jesus’ breast to comfort Him during the last supper. He was the only disciple who didn’t desert Jesus at the puppet trial and gory crucifixion. John was so loved by His Master that Jesus entrusted His aging mother into John’s care. And when Jesus restored Peter at the fish stick breakfast by the sea, once again Jesus affirmed that John would outlast all of the other disciples, including Peter the Rock. That’s why John called himself “the disciple whom Jesus loved” in John 13:23, 19:26, 21:7 & 21:20.

Best friends understand you better than anyone else.

John had more “red letters” (words of Jesus) in His gospel than Matthew, Mark or Luke. John was a good listener. He remembered Jesus’ words and wrote them down. Like Mary of Bethany, Jesus’ beloved John knew His heart. He understood the faith Jesus so deeply longed to impart. He vividly described eight miracles of Jesus in his gospel to persuade even the most hardened skeptic to come to faith. His short letters of first, second and third John oozed the core of Jesus’ message in simple terms. Jesus called it the “first commandment:” “Love the Lord your God with all your heart, soul, mind and strength and your neighbor as yourself.” (Luke 10:27) Wrinkled and weary, old John, imprisoned on the Isle of Patmos, was caught up into heaven’s glory to learn God’s plans for Future Earth.

Being a best friend isn't easy, but it's worth the cost.

How can we love like John? The richness of a deep friendship takes more than tweets and texts. It takes time, devotion, acceptance and persistence. You can’t be afraid of the ugly stuff. Take down your walls and allow your bosom buddy to know the real you. You’ll be the richer for it!