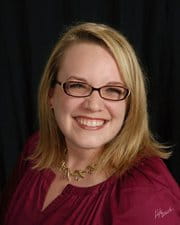 Saturdays are hectic at a pastor’s house. I limped toward the bedroom dresser with a boatload of boxer briefs, t-shirts and socks so the Barrier family would look our best on Sunday morning. Roger, my husband, was polishing his Sunday sermon as he rocked on the back porch. Brie happily shoveled sand into her sand pail and mouth (Oh, dear!) while Daddy studied. All was quiet on the home front.

Suddenly, I heard Roger shout, “Julie, get to the bathtub NOW!!!” There was an unusual urgency in his voice. I dropped the laundry and sprinted toward our sunken tub. We had a large tile sunken tub in the back of the house that was about four feet deep. As I bounded through the bathroom door, little Brie was precariously teetering head-first toward the cement floor.

I scooped my baby up and pressed her tightly to my chest. Roger ran toward us just as I carried her to safety.

“I didn’t call you, Julie,” he replied, astonished. “I heard YOU scream, ‘Rog, get to the bathroom, hurry!'”

We looked at each other, speechless. Neither one of us had spoken a word of warning, yet we were clearly summoned to avert the disaster.

That was the first time we met Brie’s guardian angel. We thanked God for sparing our baby daughter. I was reminded of Psalm 34:7:

“The angel of the LORD encamps around those who fear him, and he delivers them.” NIV

Brianna’s guardian angels have always had to work overtime. One balmy spring afternoon, Brie donned her baggy P.E. shorts and tennis shoes to join her classmates on the soccer field. Shortly after the game ensued, a dark sedan pulled into the school parking lot. The driver lowered his tinted window, aimed his rifle, and pulled the trigger. He fired two shots at the girls and sped away. One of the bullets hit Brianna in the leg. Fortunately, the bullet grazed her thigh and she sustained no permanent damage. Once again her angel intervened. The bullet had hit the goal post and ricocheted into her leg. If the shooter’s bullet had hit her directly, she might have been killed or crippled.

I was on a concert tour in Portland when I received the news. Roger left his cell phone at the office and couldn’t be reached for a couple of hours. When he finally reached the ER, Brie was unnaturally calm. She sensed her invisible protectors all around her. God and His angels were there.

Teenage Brianna toured South America with the Continental singers the summer before her sophomore year in high school. She contracted tuberculosis in Guatemala, a disease that has ravaged her lungs ever since. Two years ago, Roger stood in the hospital hallway near her isolation room. Brie had succumbed to a virulent strain of pneumonia. The doctor spoke in hushed tones.

“Prepare yourself, Roger,” the doc warned. “Tonight Brie may become a statistic.” We called every prayer team we knew and beseeched God for a miracle. That night, Brie felt the healing warmth of God’s presence and sensed the bevy of warrior angels who surround her bedside. They were there. Brie knew it and we knew it. She miraculously survived.

Our “grown up” girl has suffered many brushes with death in the last six months. A compromised immune system, multiple infections, hospital stays and surgeries have filled her days. As her nurse, I can most assuredly say that God has sent holy angels countless times to protect my precious daughter.

God-dispatched angels are always here. Surrounding us, protecting us at every dark moment. Before her last surgery, Brie was surprised to discover her surgeon, anesthesiologist, and operating room nurses were all Christians. To Brie’s amazement, the medical team circled around her to pray for God’s protection. The Bible words the doctor quoted were Brie’s life verses, the ones she requested every night since childhood when I tucked her into bed.

“For God will command His angels concerning you to guard you in all your ways;
they will lift you up in their hands, so that you will not strike your foot against a stone.
You will tread on the lion and the cobra; you will trample the great lion and the serpent.

“Because she loves me,” says the LORD, “I will rescue her; I will protect her, for she acknowledges my name.” NIV

Brie said at that moment she experienced the peace of God unlike anything she had ever known.

Now my sweet girl is stronger than ever. Heavenly hosts have provided an invisible fortress day by day.  At night, as I conclude my prayers and close my eyes in sleep, I hear their fluttering wings. And one day, I will join them around God’s throne singing “Holy, Holy, Holy is the Lord God Almighty, who was and is and is to come.”