An Axe Murderer, A Missionary and A Miracle

An Axe Murderer, A Missionary and A Miracle 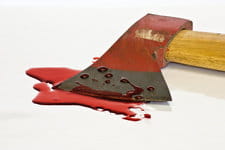 The sharpened steel axe blade cracked her skull like an eggshell. Awakened out of a deep sleep, Beth fell to the floor in a heap, limp and blood-soaked. In spite of her gaping wound, she spied the hulking forms of two men pummeling her husband with the rough-hewn axe handles. But Dan fought like a wild man, fiercely hovering over his injured wife, determined to serve as a human shield to spare her life.

Suddenly, the two masked intruders heard their superior officer barking orders in Russian outside the bedroom window. A passer-by had heard the screams and the assailants did not want to be discovered. One of the brutes carefully placed the bloody axe in Dan’s hand to frame him for his wife’s murder. The missionary family had caused quite a stir among their neighbors with the teachings of this heretic, Jesus, and the secret police were determined to shut them up for good.

Dan grabbed a large bath towel and fashioned it into a makeshift tourniquet for Beth’s head. Beth, blinded by blood and brain matter, managed to cry out: “Dan, the girls! Find the girls!” Faint from the agony of his broken ribs and clavicle, Dan stumbled to his daughters’ bedroom. They were nowhere to be found. Were they abducted? Were they already dead? Susie, seven, and Ellie, five, had disappeared without a trace.

Immediately, Dan called his mission organization’s emergency number to get a Medevac for Beth. She would be airlifted to Vienna, the closest and safest hospital. As reinforcements arrived, Dan’s beloved Beth was motionless, brutally bludgeoned but breathing.

Mom and Dad refused to leave until their daughters had been found. Just as the helicopter revved its engine to airlift the patients, Ellie and Susan emerged from the backyard shed, shivering and unscathed. Mom and Dad wept that their babies had escaped the soldiers’ brutal attack.

The medics bundled the trembling girls in wooly blankets and placed them in the front seat of the copter next to the pilot. Dan demanded that his precious cargo remain beside him on the gurney. He held their tiny hands tightly. The medics whisked the frightened family through the frozen darkness to safety.

Vienna was three hours away. The medical team on board stitched Beth’s gash and hoped for the best. As Dan’s arm and shoulder were stabilized, he was conscious enough to ply his little daughters with questions.

“What happened? Where were you? Did the men chase you outside? Did they hurt you? How did you ever escape?” asked Dan.

“Jesus woke us up, Daddy. He told us to follow Him and he carried us to the shed and pushed us under the bench behind the garden tools.”

Ellie chimed in. “He looked just like I thought He would, Daddy. I wasn’t scared or nuthin.’ He was there and then He wasn’t.”

Susie added, “The big man with the hood opened the door and stared at us. He was holding a big stick in his hand. He lifted it up, and then dropped it on the ground. Ellie and me didn’t say anything. He just ran away. We stayed ‘til we heard the helicopter noise and came out to find you.”

Dan collapsed on the stretcher, groggy and relieved. The girls’ strange story would have to be processed tomorrow. The morphine drip was taking effect.

Beth lay comatose in the Wiener Krankenanstaltenverbund (hospital) for two months. After multiple brain surgeries, she regained consciousness. Her physician reported that she had suffered minimal permanent brain damage, only slight memory loss. When she awoke, Beth spoke clearly and articulately, as if the attack had never happened and her brain had suffered no injury.

Beth related her miraculous experience in the heavenlies.

“I found myself in a great hall. They cheered as they looked down at me ... my role-models, just like the Bible said in Hebrews 12:1:

“As for us, we have this large crowd of witnesses around us. So then, let us rid ourselves of everything that gets in the way, and of the sin which holds on to us so tightly, and let us run with determination the race that lies before us.2 Let us keep our eyes fixed on Jesus, on whom our faith depends from beginning to end.” GNT

“Moses, Paul, Abraham, Daniel and Jesus … I recognized them all. They stood, applauding and shouting. I felt so warm and happy and proud. I didn’t know if I would return to earth, but I will never forget Jesus’ smile as He gazed into my eyes.”

“I couldn’t believe it. I was there among all of the heroes of the faith I’d read about and admired. Somehow I knew I had won a great victory. I had held onto my faith and completed the task that God gave me.”

“I awoke with a blinding headache. I could only see shapes, but I knew that it was you, Dan, stroking my hair and holding my hand. Then I knew. Jesus had more for us to do. We will finish His work together, fearlessly and joyfully.”

She sighed, exhausted from her brief conversation with her beloved.

Years later, as she told me her story, I marveled at her courage and perseverance. Dan and Beth didn’t see themselves as missionary material. Dan was an esteemed professor at an Ivy League university and they lived a charmed life. But God called them to take another road to a hostile country full of enemies, hardships and poverty. Even after such persecution, Beth confided that she longed to return to her loved ones and ministry partners in that dark place.

God had yet another calling on the lives of this amazing family. They now lead a massive missionary organization with dedicated servants throughout northern Europe and Asia. Ellie and Susan are young ladies now, and serve the Lord alongside their parents.

Few of us have faced torture and persecution as Beth and Dan have, but they will both testify that in the gray mist between life and death, Jesus was there.

And so He shall be for you, too.

(This story is not an urban legend. These precious missionaries are our personal friends. We have seen the scars and can validate the facts. However, all names have been changed to ensure their safety and security.)