Jesus Receives a Compliment from His Enemies

Jesus Receives a Compliment from His Enemies 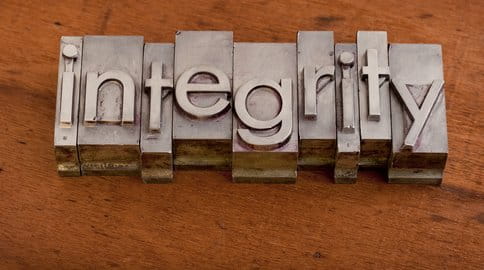 “Then the Pharisees went out and laid plans to trap him in his words. They sent their disciples to him along with the Herodians” (Matthew 22:15).

Twenty years ago my older brother took me to visit a cemetery outside Florence, Alabama, near the remains of an antebellum mansion called Forks of Cypress. The mansion was built in 1830 by James Jackson, an early settler of northwest Alabama. My brother and I walked among the ruins of the mansion and then crossed the country road into the dense forest on the other side. After a quarter-mile we found the Jackson family cemetery. There was no sign marking the spot—only a five-foot-high stone wall surrounding about fifty graves. Inside we found a tall marker over James Jackson’s grave with a long inscription extolling his virtues, which were many.

As I walked along, my eyes fastened on the marker of one of his sons. There was a name, a date of birth and a date of death, and a five-word epitaph: “A man of unquestioned integrity.”

Five words to sum up an entire life. Sixty-plus years distilled into five words. But what truth they tell.

“A man of unquestioned integrity.” I cannot think of a better tribute.

In the Bible one man stands out above all the others as the preeminent example of integrity—Jesus Christ, our Lord and Savior. He was the only truly blameless person who ever walked this earth. All the other great men had their weak points. But not Jesus. No one could pin an accusation on him to make it stick. Not even his enemies.

Matthew 22:16 tells us how His opponents sized up His character in the last few days of his life. The statement comes from the Pharisees who “laid plans to trap him in his words” (verse 15). They sent some of their well-trained disciples to trick him with semantics. Ponder carefully their opening remarks: “Teacher, we know you are a man of integrity and that you teach the way of God in accordance with the truth. You aren’t swayed by men, because you pay no attention to who they are.”

This isn’t just a compliment. It’s an honest evaluation of Jesus by men who intended to murder him. The Pharisees and the Herodians didn’t like each other, but both groups hated Jesus.

What does Integrity involve?

Reputation: “We know”
Commitment to truth:

In words: “You teach the way of God.”
In relationships: “You aren’t swayed by men.”

Consistent lifestyle: “You pay no attention to who they are.”

Even as they attempted to trip him up, Christ’s enemies had to confess that his reputation, his commitment to truth, and his consistent lifestyle made him a man of integrity.

Why is this important? If Jesus had any skeletons in his closet, this was the moment to display them publicly. But they didn’t because they couldn’t because Jesus was exactly what he seemed to be. His life matched his lips; his deeds matched his words; his character backed up his claims.

That’s what integrity is all about.

We hear a lot these days about family values and the need to rediscover virtue in American society. But the basic building blocks of virtue are actually very simple. We’ve known them all along: honesty, perseverance, faithfulness, kindness, loyalty, self-control. The problem isn’t in the knowing—it’s in the doing.

My mind wanders back to a forgotten tombstone and those five simple words; “A man of unquestioned integrity.” I’m not sure what anyone will write on my tombstone. But I wouldn’t mind if someone felt I deserved those five words.

It’s a noble goal for all of us.

Lord, help me to live so that no one will be surprised to find out I’m a Christian. Amen.