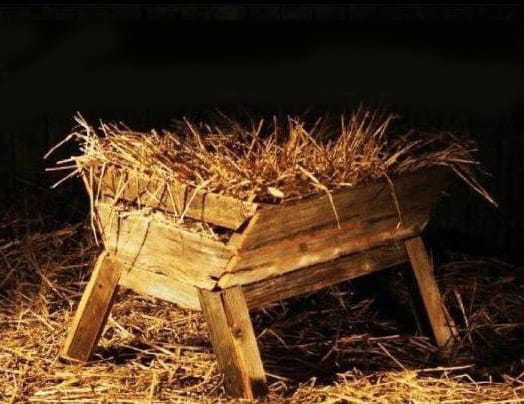 “She gave birth to her firstborn son and wrapped him in swaddling cloths and laid him in a manger” (Luke 2:7).

What’s wrong with this picture?

The answer is simple: Jesus doesn’t belong here. He’s the Son of God from heaven. He doesn’t deserve to be treated like a vagrant or a criminal. He deserves the best the world has to offer. He comes from heaven to earth—and ends up in a stable? How can that be? Let me press the point home another way. God could have done better. Suppose you had all power and could choose the time and place and manner of your son’s birth. Would you choose to have him born outside, in a stable? That doesn’t make any sense.

If Jesus were born today, it would happen in a ramshackle tenement building or in a field in the country or in a remote village in India. The world that had no room for him then has no room for him now.

His humiliation started early and continued to the very end. He was born outside because they wouldn’t let Mary and Joseph come inside. During his ministry he told his disciples that “Foxes have holes and birds of the air have nests, but the Son of Man has no place to lay his head” (Matthew 8:20). He owned nothing but the clothes on his back, and when he was crucified, the soldiers gambled for his robe. When he died, they buried him in a borrowed tomb.

The “No Vacancy” signs were there for our benefit. God could have made a room available. He could have created a hospital or a palace in Bethlehem if he had so desired. The sequence of events that unfolded—the census, the long journey, no room at the inn, “no crib for a bed,” the feeding trough, the “swaddling clothes"—all of it was planned by God even though it all appeared to happen by chance. God willed there would be no room in the inn not for the sake of Jesus, but for our sakes, that we might learn who Jesus is and why he came.

May God grant to each of us faith to believe and an open heart to say, “Yes, Lord Jesus, there is room in my heart for you.”

Lord Jesus, we pray today for those who are struggling to know you. Pull back the curtains of unbelief so that they might be filled with faith to believe in you. Amen.