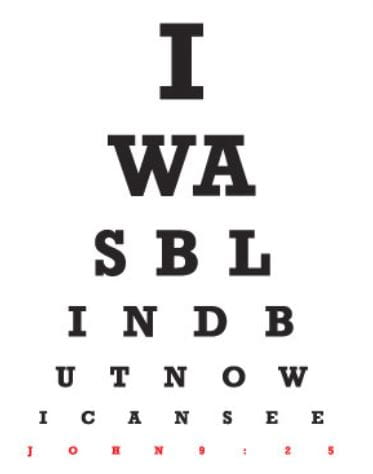 How can you prove your faith is real?

The man born blind faced that problem when the Pharisees questioned him. They doubted everything about his story, including the fact that he had been born blind. But mostly they wanted to discredit Jesus who had given him sight.

When facing a skeptical world, we can’t always prove what we know to be true because spiritual truth is a matter of perception, not proof. How do you “prove” the beauty of a sunset? You don’t. Either you see it, or you don’t. That’s like asking a young man to “prove” he is truly in love. Some things in life must be experienced to be understood.

This blind man doesn’t know who Jesus is. He only knows what Jesus did for him: “I was blind, but now I see!” That was enough for him, even if it didn’t convince the Pharisees. J. C. Ryle explains the importance of this sort of personal testimony:

“There is no kind of evidence so satisfactory as this to the heart of a real Christian. His knowledge may be small. His faith may be feeble. His doctrinal views may be at present confused and indistinct. But if Christ has really wrought a work of grace in his heart by His Spirit, he feels within him something that you cannot overthrow” (Expository Thoughts, vol. 4).

It reminds me of John Newton’s testimony. After years spent as a slave trader, with no thought given to the Lord, he had a dramatic conversion when his ship began to founder during a terrible storm. He left the slave trade and later entered the ministry. He wrote nearly 300 hymns, most of which have been long forgotten. But he wrote one hymn that is still sung around the world:

Amazing Grace, How sweet the sound

I once was lost, but now am found

Was blind but now I see.

Do you know Jesus? Have you ever been converted? If so, do what this blind man did and let the world know. You don’t have to “prove” anything.

Just tell what Jesus has done for you.

Father, may I always be ready with an answer when someone asks, “What has Jesus done for you?” Amen.