Trouble at the Temple: A Crook's Paradise

Trouble at the Temple: A Crook's Paradise 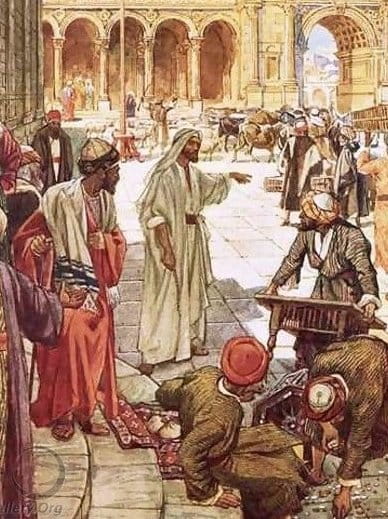 “Jesus went into the temple complex and drove out all those buying and selling in the temple. He overturned the money changers’ tables and the chairs of those selling doves” (Matthew 21:12).

Sometimes you’ve got to clean house.
In this case Jesus decided to clean his Father’s house.

The ancient Jewish sources give us lots of information about the money changers. Each year at Passover Jerusalem swelled with observant Jews from all over the Mediterranean world who spoke different languages and used different monetary systems. In order to offer a sacrifice at the temple, all those different currencies had to be changed into the local currency.

The money changers provided an essential service by which Jews from distant lands could change their currency so they could buy animals for sacrifice at the temple. The money changers also charged interest on their transactions and marked up the prices during the “high season” around Passover.

You can see where this is going.

I read an article by an author who offered a wry observation on human nature: Anything that can be corrupted already is; we just don’t know how. Experience suggests he is probably right. After all, the Bible says that “all men are liars” (Psalm 116:11). That doesn’t mean that everyone lies all the time, but it does mean that lying comes easily to all of us.

What started as a useful and necessary service to travelers became a “den of thieves” where the unscrupulous money changers ripped off pilgrims who came from Rome, Egypt, Mesopotamia, Cappadocia, and all parts of the Middle East. They were weary after traveling a long distance, they were in a strange culture, in a crowded city, with a great desire to take part in the Passover celebration. So of course they were easy targets, “low-hanging fruit,” so to speak. It was a con artist’s dream because you set up your tables in the temple complex and waited for people to come to you. Then you charged them double or triple or five times or ten times or whatever you could get. And the pilgrims paid it because they didn’t know any better.

Let's call it a crook’s paradise.

Then Jesus shows up and spoils the party. He cleansed the temple because its leaders were corrupt and greedy. The priests made money off the backs of the poor people who had no other option. They had turned the temple from a house of prayer into a noisy, money-grubbing circus.

Jesus hated that.
He hated the businessmen who took advantage of the poor.
He hated the priests who were in on the deal.
He hated those who acted unjustly while claiming to worship the God of justice.

Jesus despised what these profiteers were doing. Injustice is always wrong, but injustice in the name of God is doubly evil. He took a whip, waded into the crowd, and overturned the tables. He literally ran the money changers out of business.

Good words to ponder as we journey with Jesus toward the cross.
Are we bystanders as life passes by?
Or will we care enough in Jesus’ name to get involved?

Lord, forgive us for standing idly by while evildoers take advantage of the weak. Give us eyes to see, a voice to speak, and the will to act. Amen.