Why Did You Doubt?

Why Did You Doubt? 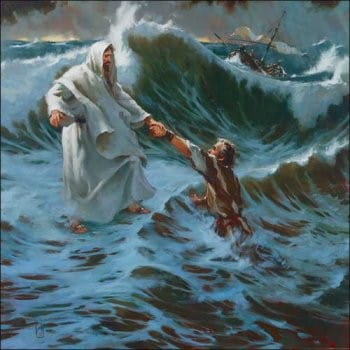 In Peter’s case, he was safer out on the water than in the boat. At that moment, the smartest thing Peter could do was to get out of the boat. Once Peter was fully on the water, he turns to walk toward Jesus. Everything goes fine until Peter notices the storm all around him. Remember, the storm has never stopped. During all this commotion, the rain has been coming down in sheets. Behind him the little fishing boat bobs on the roiling waves.

Matthew tells us that “when he saw the wind, he was afraid.” (v. 30). But the wind was there all along. The storm has been raging for hours. It’s not as if it lets up when Jesus begins walking on the water. Jesus comes to them in the midst of the storm. According to verse 32, the wind doesn’t die down until Jesus and Peter get in the boat. It’s not easy to keep your eyes on Jesus in the middle of the night, when the raging storm of fear threatens to overwhelm you. This text reminds us that not only does Christ control the storm, and not only does he send the storm, he reveals himself in the midst of the storm. Very often our purest vision of Christ comes when the storms of life threaten to capsize the tiny boat of our faith. What do we do then?

Pray for “concentrating faith.”
Focus on Jesus.
Fix your eyes on the Son of God.

What happened to Peter can happen to any of us. For a brief moment, he forgets about Jesus and remembers who he is and where he is. When he lost his concentration on Jesus, he began to sink.

As he goes down into the water, he prays one of the shortest prayers in the Bible: “Lord, save me!" (v. 30) When you are sinking you don’t have time to pray a long prayer. If you aren’t quick about it, you’ll drown before you get to the end of your prayer. The Bible says that immediately Jesus reached out his hand and caught him. His words to Peter are very important. "You of little faith, why did you doubt?" (Matthew 14:31). In our English version, “You of little faith” comes out to four words. But in the Greek Jesus only used one word: “Little-faith.” It’s a title or a nickname. Jesus called Peter “Little-Faith.” “Little-faith, why did you doubt?”

When Jesus called Peter “Little-Faith,” he was not rebuking Peter for attempting too much, but for trusting too little. Do you see the difference?  Jesus is not saying, “Peter, you should have stayed in the boat.” To the contrary, Jesus is really saying, “Peter, if you had just kept your eyes on me, you could have walked across the Atlantic Ocean.”

Keep your eyes on Jesus and not on the storm. That’s the lesson for today.

Heavenly Father, forgive us for trusting you too little. Shake us loose from the security of staying in the boat. Help us to walk on the waters of faith because we believe that Jesus will hold us up.  Amen.

Why is it that our clearest vision of Christ often comes in the midst of a storm? If you had been Peter, would you have gotten out of the boat? Why or why not? Name some storms in your life that are distracting you right now? What would help you have "concentrating faith" today?