You're a Pastor, Not a People Pleaser: Learn How to Say 'No'

You're a Pastor, Not a People Pleaser: Learn How to Say 'No' 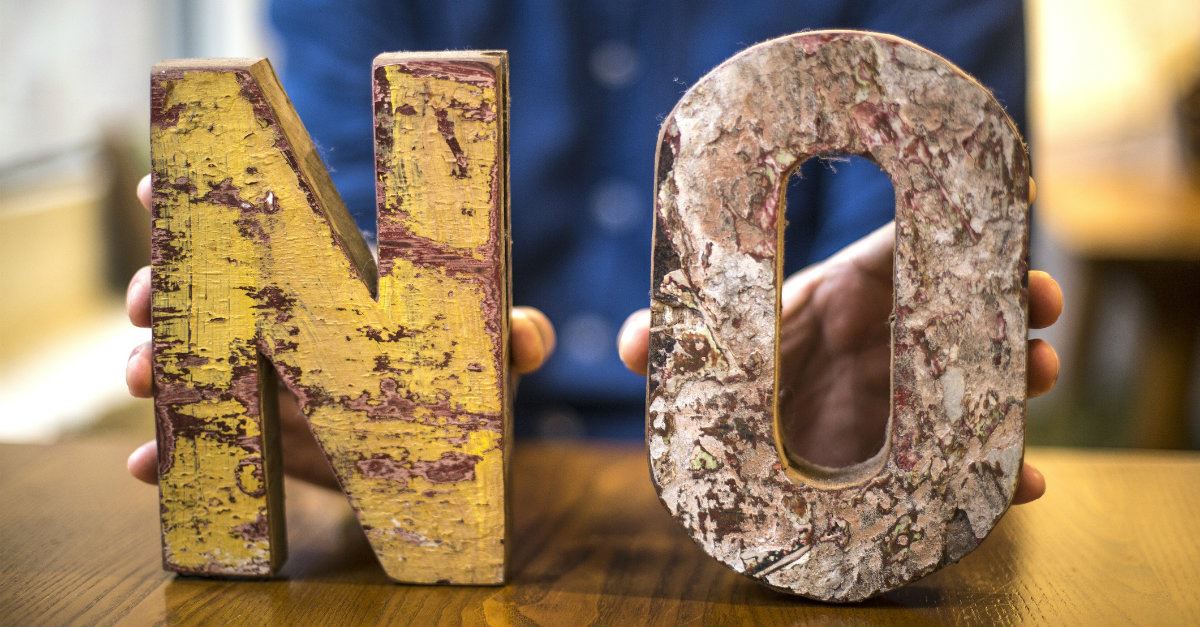 It’s hard for us people-pleasers to say “no” when going along to get along would cause fewer waves.

By  “people-pleaser” I do not mean opposed to doing the will of God, but wanting the people around me to be happy if it is in my power to make them so.

“Why can’t we all just be happy?” Many of our readers are in that boat. And some of us need to step out and take a stand on solid ground.

My theory is that writing about mistakes made in my preaching/pastoral ministry of nearly 60 years is of more interest to the general reader and of greater value to the young pastor who wants to know where the potholes are in order to avoid them. Even as we all learn from our mistakes more than from our successes, I suspect we benefit more from hearing of the failures of others than of their victories and successes. I know it makes for more interesting reading! Anyway…

I’m thinking of two instances in particular when I should have put my foot down and said, “No, absolutely not” and held my ground. As it was, I meekly went along with what others around me wanted–always wanting the people around me to be happy–and have lived with the memory of that ever since.

The first instance, I was 30 years old, and concluding my third pastorate.

This was to be my final service in that church where I had labored hard for three and a half years. I had a sermon prepared, some final things to say to the church, points I felt would be helpful and encouraging, and a fellowship honoring our little family was to follow.

That Sunday afternoon, the chairman of the deacons who also was chairing the church’s pastor search committee, phoned. “Pastor, Brother Martin is in town and we would like him to preach for the church tonight. Otherwise, we will have to bring him back from the Gulf Coast and it might be several weeks before that can happen.”

Hugh Martin was a seminary classmate and a good man. In fact, nearly four years earlier, he had recommended my name to this church. So I owed him a lot. What I did not owe him was my final service with my church. (Of course, the problem was not with him but with my chairman.)

The rest of this story–after I agreed (meekly, I might add, and against my wishes)–was that when the time for the sermon came, Brother Hugh Martin stepped up to the pulpit and began to preach. That’s when the chairman of the committee leaned over to me. “Pastor, we want to vote on him tonight.”

I said, “Wait a minute.” Yes, we’re having this conversation on the fourth row, right in front of the guest preacher who is midway through the introduction to his sermon.

I said to my deacon leader, “This is a holiday weekend.” (It was New Year’s.) “You have members out of town and they hardly know the search committee has started looking for a pastor. They are not going to like returning home to discover the church has already called  a new preacher.”

The chairman–a good man, but completely used to getting his way in everything–said, “The committee is agreed on this, preacher.” Translation: He had told the members of the committee and they had meekly–there’s that word again!–gone along with it. They would not have protested if they learned I was against it.

What I said was, “Well, I’m leaving. You can do whatever you please.”

What I should have said was, “No. This is not right. And you cannot do it.”

And he wouldn’t have.

Of course, three hours earlier, I should have told him this is no way to present a new pastor. Wait two or three weeks, then bring up Hugh and Jean Martin from Gulfport and let them have the full weekend getting acquainted with the church. Had I done that, the chairman would have acquiesced and done it, and good things would have happened. The congregation would have appreciated it, the new pastor would have started off on a good note instead of bearing the resentment of several over the way this was handled, and my final memory of that church would not have been spoiled.

I don’t sit around regretting this. It is, however, permanently fixed in my memory.

The second instance, I was 34 and in my first year of a new pastorate.

I’d been at this new church–a large, influential church–for only a few months. We had just called to our staff a friend of mine who had recently finished seminary. He would be my assistant and would work with high school students. Soon after arriving, he asked if the church could have a “youth revival.”

The term “youth revival” can mean many things. What it meant to me–remember, I’m hardly out of my adolescence myself–was a full spot on the calendar with an excellent speaker. What I was to learn in time was that a youth revival could also refer to a meeting involving only the youth and take place in only one or two meetings. Anyway…

My new assistant had a seminary classmate he wanted us to hear. “He was voted the outstanding graduate last year,” he said. They were great friends. Now, I do not know the guy and have never heard him preach. But on the strength of the recommendation of my young assistant, we invited him and gave him a major slot on the church calendar: Sunday morning, Sunday night, and each night through Wednesday.

Sunday morning, he preached before 800 people which included perhaps 100 college students. The television cameras were live.

And he messed up royally.

Somewhere in the sermon, this young preacher pontificated about the Lord Jesus in what was full-out heresy.

What he said was, “There is evidence that when Jesus was praying in the Garden before going to the cross, He did not know he would be raised from the dead.”

I’m on the front row hearing this. You may believe that I came awake in a heartbeat. “Did he say that? Surely he didn’t say Jesus did not know he was going to be raised from the dead!”

I thought of the times the Lord Jesus had said, “Destroy this body and I will raise it again on the third day.” “As Jonah was in the belly of the fish three days and three nights…” and so forth.

Then, the guest preacher repeated it. And again later.

For the rest of the sermon, I’m thinking, “All right, pastor. What are you going to do now? You cannot let this stand. It’s full-blown heresy. He’s contradicting the plain teaching of Scripture.”

And yet, to address it in this service would humiliate him before this crowd as well as family members who had driven in from Missouri to hear their brother preach.

On the other hand, if I waited until next Sunday to address it, we would not have this same congregation back. In fact, common sense says we could never assemble this exact crowd again.

So, at the end of the service, I did it.

I called attention to what the young preacher had said and cited some Scriptures that said otherwise. I hated doing it and could only imagine how he must be feeling. But he had brought it on himself, I felt.

Later, I found out that he and my young assistant had fed off each other’s anger toward me and that the guest had considered canceling the rest of the meeting. “That would have been all right,” I told him. (He was later reported to have told the youth that sex before marriage was permissible only if there was–ahem–a relationship. Had I known that, I would have given him a quick ticket out of town.) We did go forward with the revival through Wednesday night, although it had lost its luster for me.

In the next deacons meeting, I addressed this and explained to the leaders what had happened. The chairman had one sentence for me. “Pastor, you’re being too free with your pulpit.” That’s all he said. And he was right.

In the first place, I wish I had said “no” to a youth revival–or a meeting of any kind–with a preacher whom I did not know and had not heard. And, I wish I had had the gumption to end the revival after the first meeting instead of prolonging the agony.

As a result of these two painful episodes, I eventually developed a little more backbone and the skill to say “no” to people I loved and respected. And, as you may have noticed, I survived.