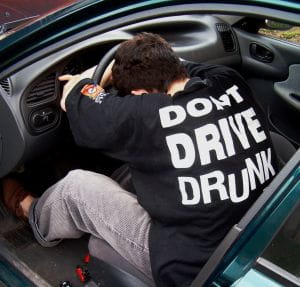 Relative to Ryan Dunn's maybe having died from driving drunk: Drunk driving is awful. No one should do it, ever. Virtually everyone gets that. If you ask 100,000 people whether drunk driving is good or bad, 100,000 of them will wonder why you're asking them such a dumb question.

"Bad," they'll say. "Drunk driving is bad. You're the worst pollster ever."

Which of course will make you feel rotten about your awful pollster job.

Which will make you want to go out after a hard day pollstering and have a drink.

Which won't be any trouble at all for you to do, because drinking is just about the most celebrated thing in our country. [Italics mine. But duh.]

I'm sitting in a Starbucks. Out the window I can see five restaurants where I could go, right now, and have just about about any drink I want (coaster included!). Not a quarter mile away are four liquor stores. Within five or so blocks are eight drug or grocery stores, each sporting a liquor department that could keep any frat house partying for a year.

A quick side-of-the-coffee-cup calculation shows that, taken altogether, I am sitting within walking distance of 763,000 quadrillion gallons of booze, give or take a shot.

What's the first thing your waiter asks you at a restaurant? That's right: "Do you always wear your pajamas in public?" But what's the second thing you're asked pretty much the moment you sit down?

"Can I bring you anything to drink?" "Can I get you started with a cocktail?" "Here's our drink menu." "You're gonna want some booze, right?" "You look like a hardcore alcoholic. Can I fill up the flask I know you have on you somewhere?"

Sure, they all have a different way of saying it. But it's always just a given that you'll have a drink or four with dinner. The waiter never goes, "Would you like a cocktail before dinner, even though if you have one drink you're pretty much guaranteed to have another, and then another, until in about ninety minutes you're out weaving around on the road like the mad dog freeway murderer you are?"

No, they never say that. Why? Because that's a lot to memorize, that's why. And also because sober people don't tip half of what drunk people do.

Drunk People Tip. That is so on the break room bulletin board of every restaurant you've ever been in.

No, but seriously: in one way or another, you're encouraged to drink everywhere you go, except for the bank and ... the blood bank. And even then if you're a boozy vampire, or have tragically failed to understand the concept of a Bloody Mary. Imbibing alcoholic beverages is so much a part of our lives that, before stepping out at night, most of us, without even thinking about it, slip a spare liver into a purse or jacket pocket. And once we've kicked our way through the neighborhood dogs we're on our way!

And all that drinking, partying, great music, good fun, delicious food, and excellent outdoor seating with the amiable and good-looking servers happens in places pretty much everyone drives to. Unless you live above a bar, or next door to a Rockin Lobster, or behind a couch in the break room of a Hooters like I once tried to, you will most likely get to your Place o' Fun by driving there.

It's so insane. As a society we're constantly encouraging people to drink outside of their home -- yet we're utterly appalled at the idea of anyone driving drunk. But of course people drive drunk. Anyone caught driving drunk could probably successfully sue for entrapment whatever establishment they were just at.

"Not guilty!" the judge would say. "Now stumble outta my courtroom, you cheap boozer!"

That would be one loser of a judge, for sure. But he'd have a good point: People drink because they're constantly being enticed to drink. And hoping that the vast majority of drunk people won't drive themselves home after they've been drinking is like hoping the vast majority of boxers won't get punched. They will. They can't help it. Once they step into the ring, that's what happens to them.

Driving home the other night from this big, fancy, outdoor charity event thrown by the local Rotary Club (that's right: I roll with the Rotarians, sort of), I got caught in a police DUI check point. I hadn't been drinking, but it was well-nigh (??) impossible not to drink at this event: all kinds of wineries and distillers were offering samples of their product: free wine and booze of every sort was at every turn. The Rotarians (??) wanted people to get drunk, because drunk people are so much more satisfying auction bidders.

"Have a drink! Have another drink! Have you visited our tequila bar? Have you tried all the wines? Have you seen the vodka fountain? Oh, you must! Look at the pretty colored plastic glasses! Now bid on stuff! Isn't this fun? Isn't our live band awesome? Don't you love smooth jazz? Me neither. No one does. But you might if you have another drink! Now bid on some more stuff! Now go home!"

There were about one thousand people at this event. And I know eight hundred of them drove home drunk.

And that was just one event, in one little city, on one Saturday night.

It's so easy to say that Ryan Dunn, or anyone who drinks and drives, is personally responsible for whatever damage they do.

But every time a drunk driving accident occurs, aren't we all at least a little to blame?

And isn't that not in the slightest bit funny?