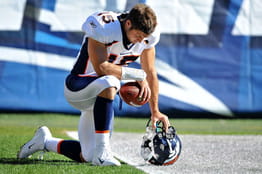 A few nights ago I got in this letter about Tim Tebow:

This year, many Christians I know have been thrilled by Tim Tebow and his well-publicized Christianity. I don’t have any problem with that. However, some of them have taken it a step further, and implied or stated that God is looking favorably upon the Broncos because of this.

I find it hard to believe that God would interfere in the outcome of a football game, regardless of the religion of the participants — and if it were true that he did, it makes hard to fathom the success of many people who are downright nasty. But I know many people who seem to feel that every win for the Broncos was proof positive that Christianity (and in particular, a very fundamentalist Christianity) is the One True Way.

So my first thought is that Tim Tebow sounds like the name of the Santa’s elf in charge of drumming monkey dolls. But that’s … stupid. Sorry.

My second thought is that no one who is downright nasty is ever successful in any way that actually matters. If you’re nasty -- mean-spirited, a cheater, opportunistic, cruel -- then you lose. That’s the rule. (Though of course I know what the letter writer meant: When Meanies Are Victorious is always a disconcerting show to watch.)

My third thought is that if Tim Tebow were all that devout, wouldn’t he, a la Eric Liddell, refuse to play on Sunday — the Lord’s Day, the Christian Sabbath? I mean, pious-wise, I’m somewhere between Andy Griffith and … well, Otis the town miscreant, and on my blog even I never published anything on Sundays before I started posting Pastor Bob’s sermons.

But whatever, I know. An NFL player who won’t play on Sundays is like a vampire who sunbathes. Total fail.

My fourth thought is the terribly obvious: “What kind of loser God would give a darn which team wins a football game?”

The idea that Tim Tebow ever compelled God to arrange for the Denver Broncos to win football games is so (in a word) unswift that having to take it seriously for as long as it took me just to type that has made me hate my life a little.

Of course it's not. God does help Tim Tebow win football games. How? Because whenever any of us open ourselves up to the presence of God, we become a better version of ourselves. We become calmer, more centered, more compassionate: we gain the comprehension and apprehension of an ultimate context that is both pacifying and edifying.

We become (for, alas, however long) wiser.

Cultivating one’s relationship with God, Jesus, and the Holy Spirit? Thumbs up.

Being obnoxiously ostentatious about doing that, and failing to realize how obviously that communicates nothing but ego and show? Thumbs down.

Attributing the Broncos’ rise to the playoffs as God’s response to Tim Tebow’s displays of faith — and then having the Broncos get dropped like a bowling ball in a pool? And having the news come out that during his team’s AFC divisional loss Tim Tebow was badly hurt — but that he continued to play through his pain?

Two thumbs up from this reviewer for that episode of the ultimate reality show.