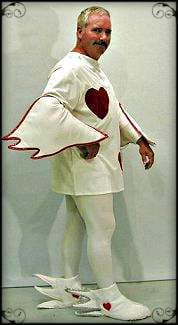 Because I hurt my hand (which'll soon heal), I’ve been lying on the couch for two days in a Codeine-induced haze. Codeine makes me feel listless, unmotivated, disinclined to move, and slightly nauseous.

I had planned to write nothing today. But I just now realized that today is February 13. Which makes tomorrow Valentine’s Day.

Which is a day that causes most men to feel listless, unmotivated, disinclined to move, and slightly nauseous.

Man, am I always ahead of the curve, or what?

Anyway, when I saw the date I knew what I had to do: rally myself to write one more thing before collapsing back on the couch like a drunk someone had dragged in from the local dive bar.

Men! If you have a wife or girlfriend, you must buy her stuff for Valentine’s Day! (And you should definitely do the same for a girl or women whom you want to be your wife or girlfriend. But that’s not what this article is about.)

I know Valentine’s Day seems stupid. I know it’s just obnoxious to basically be told to buy stuff—the exact same stuff  that everyone else is buying, on the exact same day, for the exact same reason, which in any sane world would be universally appreciated as the very opposite of romantic, since the whole thing about romantic love is how special and private it is between two people—and to then have to hand that stuff to your wife or girlfriend as some sort of weak proof that you love her.

Okay? I get the problem with Valentine’s Day. All men do. Men experience Valentine’s Day as if it were a day on which they were ordered by the government to wear a tutu, ballet slippers, and bows in their hair. It just feels extremely unnatural. And intrusive. And mostly insultingly obligatory.

The male aversion to Valentine’s Day probably has something to do with testosterone. Who knows? Who cares? It is what it is. (Which is the Ultimate Manly Motto—but whatever.)

If you’re a guy who struggles with doing Valentine’s Day the way you’re supposed to—which is to say, the way you know your girlfriend or wife wants you to—please consider this advice as totally excellent and correct:

Buy your girlfriend roses, a big card with huge scrolling letters all over it, some chocolates in a heart-shaped box, and maybe a cute little stuffed bear. Get whatever of that stuff you can afford—and if you can’t afford anything, make her something, or do something special for her. And then, on Valentine’s Day, present her with your best gift in the most romantic way possible.

And what is the secret to willingly and happily doing all that, you ask?

She knows! She gets it!

Women know men. They know that men enjoy walking down the street carrying roses and a big red heart-shaped box like men enjoy … I dunno, a glass of champagne with their cheeseburger. It’s not who they are. It’s not what they do.

You sacrificed! You delivered! You stepped up! You did the manly thing, and made sure that her roses came with a lovely decorative spray of baby’s breath.

You publicly and boldly declared your love for her. Even though doing so was acutely difficult for you. Even though the entire process made you feel awkward, and embarrassed, and extremely uncomfortable.

But you didn’t let that stop you, did you? No.

You did it anyway. You kept your eye on the prize.

And that, my friend, makes you her hero.

Pffft. How is that not a win-win?