The Very Pregnant Mary and Joseph Have a Chat

The Very Pregnant Mary and Joseph Have a Chat 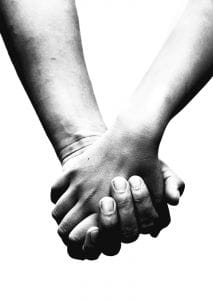 (Here’s a conversation I imagine happening between Mary and Joseph the night before Jesus was born.)

Joseph: How do you feel, Mary?

Joseph: Are you comfortable? Do you have enough hay?

Mary: I do have enough, thank you. And thanks for doing such a thorough job of cleaning that feeding trough. I can’t believe our baby’s first crib will be a feeding trough.

Mary: You’re so funny. That does sound a lot better.

Joseph: We’re lucky to have even that. I can’t believe how crowded this inn is.

Mary: Everyone’s traveling because of that stupid census. Why can’t we just mail something in saying who we are? Why do we have to come all the way to Bethlehem to register?

Mary: I wish it would hail on Caesar. [Warmly touching her belly]: Oh, well. Our little guy here will have a thing or two to say about the way things are run.

Joseph: Apparently. You know, I still can’t over what the angel said to me that night.

Mary: Tell me again! I love that story.

Joseph: Okay. Well, I was sleeping, just like any other night—you remember that night. I stayed up late because I’d eaten that bad chicken.

Mary: I do remember that. You poor thing.

Joseph: So I’m finally asleep—when all of a sudden this vision of an actual angel was before me. In a voice like all the music in the world played at once, the angel says to me, “Joseph, son of David. Do not be afraid to take Mary home as your wife, because what is conceived in her is from the Holy Spirit. She will give birth to a son, and you are to give him the name Jesus, because he will save his people from their sins.”

Joseph: That was pretty much the entirety of my response.

Mary: I still can’t believe it.

Joseph: Who could believe such a thing?

Mary [touching her belly]: Us.

Joseph: Right. And before that you’d had your whole miracle.

Mary: Now that was an example of divine intervention. Yowzer.

Joseph: And the angel who came to you said what again?

Mary: He told me not to be afraid, that I had found favor with God. “You will be with child,” it said, “and give birth to a son. And you are to give him the name Jesus. He will be great and will be called the Son of the Most High. The Lord God will give him the throne of his father David, and he will reign over the house of Jacob forever; his kingdom will never end.”

Joseph: Whoa. That is just amazing.

Joseph: Well, at least we don’t have to worry about picking out a name for the boy.

Mary: Right. I hope your grandfather is understanding about that.

Joseph: You know, I still wonder what my angel meant by “he will save people from their sins.” Do you ever wonder about what that actually means?

Mary: How could I not?

Joseph: What is it, you think?

Mary: I have no idea. I guess maybe that people will stop sinning?

Joseph: But do you really think that’s possible?

Joseph: Right. A little late for that. But how do you think that whole “save people from their sins” thing is going to work, exactly?

Mary: I don’t know. Maybe it means that everyone will just start being real nice all the time?

Joseph: Maybe. Or maybe our son will make it so that people don’t want to sin anymore?

Mary: Or maybe that they can’t?

Joseph: And how’s is he going to effect everybody? Everybody is an awful lot of people.

Joseph: Maybe it’s not going to be everyone who stops sinning. My angel did say he’d save his people from their sins. Who’s more of “his people” than us? Maybe he’s just going to stop us from sinning.

Joseph: I don’t know. Sinning does have a bit to recommend it.

Mary [playfully slapping him]: Stop it. Besides, it won’t be just us. Remember: “He will reign over the house of Jacob forever”? That’s not just us.

Joseph: It’s just all so unbelievable.

Mary: It is. I don’t know what to expect. Is he going to be born with wings? Is he going to come out talking? Wearing a crown? Giving commands? What?

Joseph: Well, we know we’ve been told not to worry. So whatever happens, it’ll be okay.

Joseph: I love you, Mary. So much.

Joseph: Once our baby boy is born, things are going to be different for us.

Mary: In ways I guess we’ve yet to learn.

Joseph: I guess thing will be different for everybody.

Joseph: What do you mean?

Mary: I hope that no one hurts him.

Joseph: Hurts him? Why would anyone hurt him? We’ve been told he will be great, and called the Son of the Most High. Why on earth would anybody want to hurt him?

Joseph: Well, no one is going to hurt our son. Why would anyone ever want to do such a terrible thing?