7 Christian Series We Need to Reboot

7 Christian Series We Need to Reboot 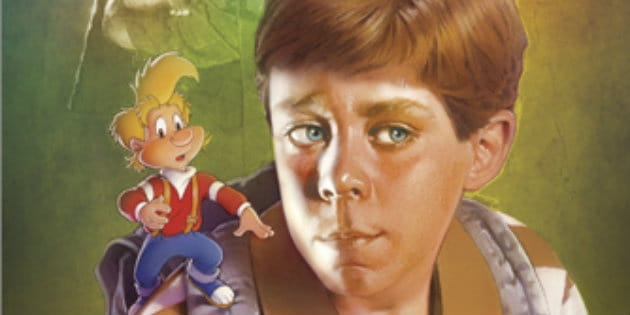 Any Christian who grew up in the 90’s knows they experienced the golden age of Christian entertainment. DC Talk was on every radio, WWJD bracelets were in fashion, and all families had at least one Christian program that was their go-to source of entertainment. But which of these nostalgic treasures deserves a remake for the modern viewer? It was a tough decision, but here are seven Christian series we despreatly need to reboot.

The Greatest Adventure Stories from the Bible

“While surveying the site of some ancient ruins, two young archeologists, Derek and Margo, and their nomad friend, Moki, find themselves trapped and sinking in a whirling quicksand. And when the dust settles, they stare up in awe at a vast chamber filled with giant relics and artifacts from another civilization. And there, at the far end of the cavern, a door with a strange inscription, ‘All who enter these portals, pass through time!’”

Anyone who has seen The Greatest Adventure Stories from the Bible knows the opening alone is worth a reboot. Not only did the show’s three protagonists experience every major biblical event from Creation to Easter, but the series was produced and animated by Hannah-Barbera! Surely that earns it a shot at a modern audience?

Check out The Greatest Adventure Stories from the Bible here!

Yeah, yeah, I know this show got a 3D facelift in 2009, but it’s just not the same. The original SuperBook was drawn in the finest Japanese animation, and for a kid, that’s an extra level of “cool” you don’t just throw away. Like The Greatest Adventures, SuperBook follows a pair of children as they travel through time to major events in the Bible. The only difference is that instead of a racially-insensitive sidekick, this pair navigates the Old Testament with the help of a wind-up, talking robot. Like most shows out of 1980’s Japan SuperBook didn’t always make much sense, but it was still a lot of fun, and gave great spiritual lessons to every kid who watched it!

What child of the 90’s doesn’t remember Adventures in Odyssey? As I’ve mentioned before, this was the series for long car rides and family vacations back in the day. Produced by Focus on the Family, Adventures in Odyssey centered on the lives of various individuals living in the quaint, American town of Odyssey. The chief protagonist was John Whitaker, an aging, portly inventor who owned a soda shop where families could go to learn about Jesus and occasionally travel through time. Not only was this one of the best adventure series ever put to cassette, it also had a number of videos, books, and a musical albums.

With so much technology permeating today’s modern world, it’s a wonder no one has tried an Adventures in Odyssey reboot. A podcast alone would be insanely popular, but can you imagine casting a live-action movie?

Check out Adventures in Odyssey here!

McGee and Me was 90’s Christian entertainment at its finest. The show seamlessly blended live-action with animation, and offered a lot of storylines Christian children could understand (minus that one with the Native American guy. Seriously, what was that all about?). The story begins after a young boy named Nick moves to a new town with his family. Nick is a shy, creative kid, and has trouble fitting in at school. Thankfully, his cartoon friend, McGee, is always around to offer support and encouragement in his walk with Christ.

A modern reboot probably wouldn’t have the same style as the 90’s original, but McGee and Me has enough nostalgia to warrant the attempt. Besides, who can forget that awesome opening scene where Nick draws McGee and watches him come to life?

Check out McGee and Me here!

While not the most popular series of the 90’s, The ButterCream Gang certainly had its charm. Unlike most gangs, the ButterCream gang devotes it’s time to helping others. After their leader, Pete, goes to live with his aunt in Chicago, he nominates his friend Scott to be the group’s new leader. Scott succeeds in maintaining the gang’s dedication to honesty, faith, and good works, but when his old friend returns, everything starts to unravel. Now Pete enjoys making trouble and hanging around with the wrong crowd.

Will the ButterCream gang survive such a betrayal? Can Scott rescue his friend from this destructive path? How has this series not been given a modern update?!

Check out The ButterCream Gang here!

GT and the Halo Express

One of the lesser known entries on this list, GT and the Halo Express was a series of musical cassettes that inspired ceaseless joy in children and endless consternation in adults. Each story centered around a boy and girl as they embarked on some new experience. Accompanying them along the way would be GT, an angel in training, and his friend, Guardian. Equipped with an endless supply of songs about scripture, the two angels would help their charges discover what God had planned for them.

By now, I’m sure most parents are looking for a new song to replace “Let it Go” or whatever Taylor Swift song their children happen to be singing. Why not give GT and the Halo Express another shot?

Check out GT and the Halo Express here!

Animated Stories from the New Testament

Of all the programs on this list, Animated Stories from the New Testament is the only one the really doesn’t need an update. That’s how well this series has held up over time. The show was managed by former Disney director Richard Rich, professionally animated, and its screenplays were allegedly written by best-selling novelist, Orson Scott Card. The series is really a great way to educate children on the life of Jesus, and if given the proper attention it deserves, a modern version could end up in theaters. If not, that’s alright, these videos still looks and sounds great.

Check out Animated Stories from the New Testament here!

What about you? Is there a Christian series you want to see get a modern retelling?